I always see blades of lightsabers have more or less the same length (dual blades are double). Why is that?

Can't a longer or shorter length be advantage in some case?

I am NOT expecting infinite length lightsabers (due to energy issues), but have we seen adjustable length blades in the Canon?

According to the Legends lightsaber Wookieepedia article a lightsaber's blade was adjustable:

High levels of energy generated by a high-output Diatium power cell was unleashed through a series of focusing lenses and energizers that converted the energy into plasma. The plasma was projected through a set of lightsaber crystals that lent the blade its properties and allowed for the adjustment of blade length and power output.

However, blade length generally could not be adjusted quickly (e.g. in the middle of combat). A dual-phase lightsaber would be required to do so:

Unlike typical lightsabers, which often possessed a manual adjuster for reducing the blade emission, the dual-phased blade could be triggered in an instant, adding an element of surprise to catch an opponent off guard. Additionally, dual-phase lightsabers also had a blade-width adjust.

An example of a dual-phase lightsaber is Exar Kun's lightsaber (which was double bladed). It was adjustable so that the blades were 0.5-1.5 meters long, and Exar Kun was known to adjust the blade lengths in combat:

Swift adjustments of either blade's length or intensity caused enemies to overextend themselves and allowed the Dark Lord of the Sith to counterattack with lethality.

Another person who used a dual-phase lightsaber is Corran Horn. He could double the length of the blade with a twist.

Also, some Jedi used a lightsaber shoto, which is a lightsaber designed to emit a shorter blade. Although these lightsabers were generally not adjustable, in the spirit of your question the short length could be advantageous by allowing different fighting styles. Examples of such Jedi include:

Adjustable lightsabers exist in Disney Canon as confirmed in the Visual Dictionaries and Star Wars: Rebels - and are probably the norm.

In the Star Wars: Rebels episode "Rise of the Old Masters," former-padawan Kanan Jarrus instructs force-sensitive Ezra Bridger in using a lightsaber for the first time, letting Ezra practice with Kanan's own lightsaber. When he turns it on, Ezra almost cuts him with the long, unwieldy blade. 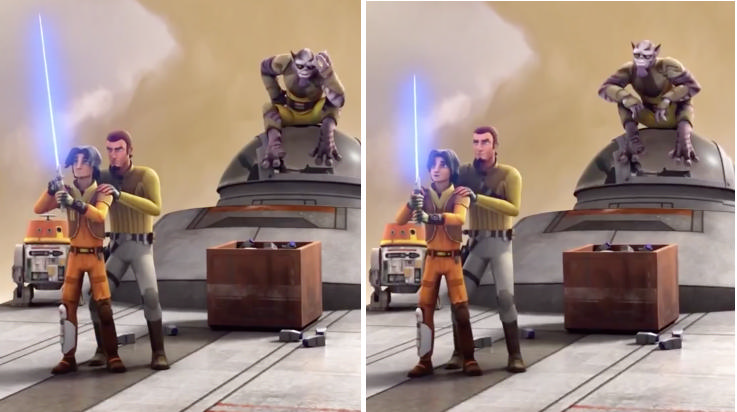 "There's a control on the side that adjusts the length to your height," Kanan tells him.

This seems to suggest it's a standard control on all lightsabers (or at least lightsabers constructed during later years of the Jedi Order) and the feature is confirmed on Anakin's Lightsaber in the Visual Dictionary. Ezra's lightsaber/blaster combo has also been shown to have length adjustment capabilities when Kanan wields it.

As seen in the screenshots above, Ezra shortens a ~5' blade to closer to ~3' (assuming Kanan is roughly 6' tall...) but there's no info on upward limits of extension. We can speculate that infinite extension would probably burn through the power cell or the blade might lose its integrity at some point. 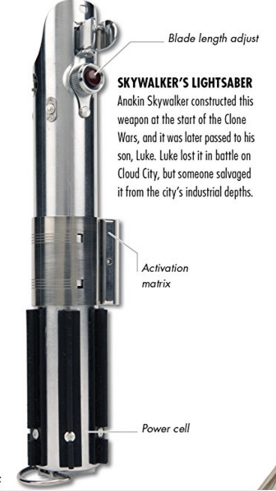 Although this shows it in Anakin's lightsaber, Kanan's lightsaber (Star Wars: Rebels TV series) also had this feature.

So, the length adjust feature of a lightsaber can be considered norm.

57
Lightsaber blade “weight” in-universe
13
Why don't we see more dual-phase lightsabers?
17
How is Kylo Ren's lightsaber able to have a cross at the hilt?
13
When did lightsabers first appear in the Star Wars timeline?
4
Does biological evolution exist within the Star Wars universe?
12
Why do some Jedi have red lightsabers in Star Wars: Republic?