In Iron Man 3, which suit shows up outside the cafe where Tony and Rhodes are?

In Iron Man 3, after having his first anxiety attack in the cafe scene with Rhodes, Tony goes out of the cafe and gets into a suit.

I like how it stays intact and stands upright and opens up when Tony comes in... that's cool.

Which mark is this armor suit, and how many other suits can do this?

Which suit is it?

The Marvel Movies Wiki has a list of all the Iron Man suits, along with helpful pictures. As of Iron Man 3, there are 42 in total, and we can compare these pictures to the scene to work out which suit Tony is using.

For reference, here’s a picture of the suit in the panic attack scene: 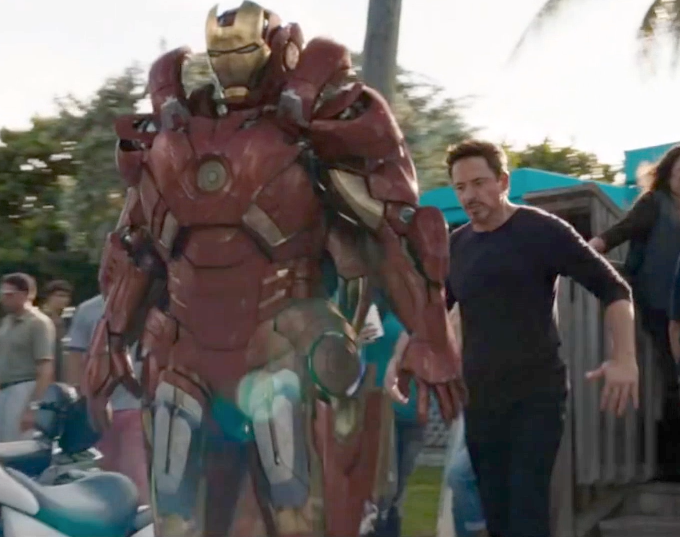 So what’s notable about this suit?

By my counting, that leaves us with suits 3, 4 and 7. There are several reasons that would lead us to believe that this is probably the Mark 7:

You can compare other details on the suits; the result is pretty clear.

So this suit is the Mark 7, last seen when Tony was using it in The Avengers.

(The Marvel Wiki seem to agree, but they don’t provide any evidence.)

Which suits can do this?

We see multiple suits do this at the end of Iron Man 3, but I’m not going to make a list of individual versions; most of them are on-screen for just a few seconds.

We know this functionality was introduced with the Mark 7: he has to use his moving archway to take off the Mark 6 (in Avengers), but we see him use the Mark 7 like this at least twice.

I think it’s reasonable to assume that every subsequent suit could do this, as it’s far more convenient than the alternative (having to rely on an assembly robot to take it on or off). The only exception might be the Mark 42, whose new modular design might make this behaviour impossible or impractical. But we see the Mark 42 do this at least once in Iron Man 3.

So I believe every suit from the Mark 7 onwards has this easy-access behaviour.

I Don't know which mark was that specific suit, but judging by the final fight scene, all of them can do that:

43
Did the Iron Man suit come from HYDRA's technology?
58
Why did Tony Stark build arc reactors into his extra Iron Man suits?
28
Why did the Iron Man suit and ARC Reactor stop working in Avengers?
7
How did the villain expect this part of his plot to work?
8
How much time has passed between The Avengers and Iron Man 3?
10
Why does the Iron Man suit fail to notice someone approaching Tony while in sentry mode?
4
In Iron Man 2 why was Vanko's suit able to match Tony's?
3
Has Iron Man ever had a suit without flight, and if so, how effective was it?