Who was/were the first Jedi?

To my knowledge it is the earliest set book in the Star Wars timeline (25,793 BBY) and I assumed that it would have been the very start of the Jedi but it's mentioned in the book that there have been Jedi for tens of thousands of years.

Who was or were the first Jedi and are they documented in any writing?

First things first, Star Wars: Dawn of the Jedi series deals with the Je'daii Order, the order directly preceding the Jedi Order but not considered the same body. The Order of Dai Bendu preceded the Je'daii Order and could be said to be its spriritual ancestor.

One of the earliest groups to discover the Force, a millenia before the formation of the Je'daii Order they discovered a pyramidal edifice they could "hear". They called it the "Tho Yor", and tended it for a thousand years, before it "woke up" and revealed itself to be a starship, which transported them to the world of Tython, where they contributed to the foundation of the Je'daii Order.

Wookieepedia gives the date of formation of the Je'daii Order as 36,453 BBY, sourced to Star Wars: Dawn of the Jedi: Force Storm 1 (the first issue of the Dark Horse miniseries)

The Monks of Dai Bendu had been only one of eight Tho Yor, that had repeated the pattern elsewhere in the galaxy, gathering Force-sensitive sentients who could hear their call and bringing them to Tython. These force-sensitives became the first Tythans and together became the Je'daii Order.

The collapse of the Je'daii Order came about due the Force Wars - the conflict between Dark-side (Bogan) and Light-side (Ashla) followers in the Je'daii Order. And post-war, the surviving Light-Siders led to the formation of the Jedi Order.

Wookieepedia gives the date of formation of Jedi Order as 25,783 BBY, sourced to SWTOR Timeline Video 1. It seems to the the date of the end of Force Wars, one of the direct outcomes of which was the creation of the Jedi Order.

The Je'daii philosophy had been balance between Ashla (Light side) and Bogan (Dark side). However, after the Force Wars, when the followers of Bogan were defeated, the victors, i.e. the followers of Ashla abandoned the philosophy of balance, stating the Light side to be stronger and this splinter group began calling themselves Jedi and formed a Jedi Council consisting of the founding members: Jedi Masters Rajivari, Garon Jard, Cala Brin and Ters Sendon. (Rajivari later abandoned the Light, and could be said to be the first Dark Jedi)

This organization persisted until the Great Jedi Purge led by Darths Sidious and Vader in 19 BBY, though it almost perished with the First Jedi Purge during Darth Revan's time in 3954 BBY.

The Official "The Jedi Path : A Manual for Students of the Force" lists the earliest Jedi as originating on the planet of Tython. 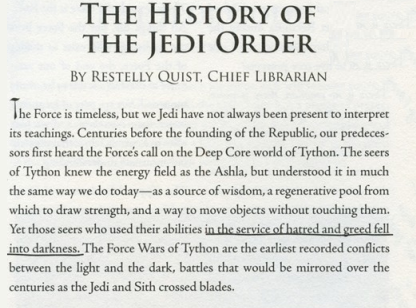 The "Jedi Vs Sith : The Essential Guide to the Force" sourcebook lists Sith force-using civilisation as having developed some 100,000ABY, approximately 75,000 years before the foundation of the First Republic. It notes that...

This would place the earliest Jedi (or their predecessors) around 100,000 years before the events of Empire Strikes Back.

In 25,783 BBY the war had raged for nearly a decade, leaving the planet a ruined waste.[9] The light-siders, led by Je'daii Masters Rajivari, Garon Jard, Cala Brin and Ters Sendon, founded a new group known as the Jedi Order and deemed that they would only use their powers for the protection of the weak and disenfranchised.

And just for completeness, the Sith Order (they named themselves after the Sith species that they enslaved) was started around 6900 BBY (~19 thousand years later):

They emerged from hyperspace above Korriban, where they were greeted by the primitive Sith people. The Exiles, who included XoXaan, Remulus Dreypa, Ajunta Pall, Sorzus Syn and Karness Muur, shocked the natives with their dark side abilities and were proclaimed Jen'jidai, meaning Dark Jedi in the language of the Sith. The Jen'jidai forged an alliance with the Sith ruler's second in command and used that relationship to overthrow the King and claim dominion over the Sith. They adopted the title "Lords of the Sith" and their ruler came to be known as the Jen'ari, or Dark Lord of the Sith.

Ajuntu Pall was the first Dark Lord of the Sith.

Note that there were dark and light side organizations that predated both the Jedi and the Sith.

The first documented Jedi (the force wielders) were rather like monks. This was at a point in time when Jedi and Sith were in the same group. There was no one specifically following light or dark. A dark force wielder Ajunta Pall gathered many of his own followers and overthrew the light masters, escaping the monastery and traveling to the dark world of Korriban; rather like the fall of Satan from heaven. The masters tried their hardest to rid all dark influences from their ranks and combat their fallen apprentices.

This was the start of the Jedi and the Sith, though neither was called as such yet.

Jedi names they have taken include Dai Bendu, Je'daii, Jedi, Rebellion, New Jedi, Resistance and so on. The Sith are the same Dark Dai Bendu, Siithsari, Sith, Galactic Empire, Dark Empire, Thrawn's Empire, First Order and so on.

So it will always be a mystery who are the ones that started it all unless they do an EU story on it if course.

15
Who built the Jedi Temple on Coruscant?
4
Was there a first known "force" user/s?

23
Do Jedi hold back with their force powers?
4
What is the term for baptizing a person as a Sith? Or (officially) converting a Jedi to a Sith?
23
Why don't all Jedi stick around as force ghosts?
29
Why did the Jedi turn totally Light side?
7
Was Obi-Wan the first Jedi (or first person) to transform bodily into a Force Ghost?
9
First person Star Wars book about a Corellian who found out he had the Force
5
Has there ever been a red Twi'lek who wasn't a Dark Jedi or a Twi'lek Dark Jedi who was not red?
4
Who designed the Emperor's chair from "Return of the Jedi"?