Why is Thangorodrim/Angband not visible in the provided map in the Silmarillion book?

At least it is not visible in all versions I could lay hands on (German / English).

The map ends in the North with Hithlum and Anfauglith.

I ask because Angband is a core location in the Silmarillion and as a visual human I need to know where the action happens. I felt really betrayed when I frantically searched for Angband, Angband....uh, Anfauglith....what?! Somewhere in the North?!

Thangorodrim was on all of the draft maps published in History of Middle-earth but was omitted from the map in the published Silmarillion.

The reason for this was a contradiction between the second (and final) JRRT map and the later Silmarillion texts which CT used as a basis for the published work; quoting here from History of Middle-earth 5:

At this time Thangorodrim was conceived to be quite near: the second Map agrees closely with the Ambarkanta map V in this. In post-Lord of the Rings writing it is said that 'the gates of Morgoth were but one hundred and fifty leagues distant from the bridge of Menegroth'; whereas according to the scale of the second Map the distance was scarcely more than seventy.

Since the second Silmarillion map was also the last (again, HoME5) this difference in distances was never reconciled. Thangorodrim was on the very north of the second map, but according to the post-LotR texts it would have been well off-map. CT preferred the post-LotR texts and therefore omitted it from the published map, as he notes in History of Middle-earth 11:

The distance given here of 150 leagues (450 miles) from Menegroth to Angband's gate, more than doubling that shown on the second map, seems to imply a great extension of the northern plain. The geography of the far North is discussed in (HoME5); but since it is impossible to say how my father came to conceive it I discreetly omitted all indication of the Iron Mountains and Thangorodrim from the map drawn for the published Silmarillion.

The production history of the Silmarillion is a long and complex one. The truth of the matter is that there was no map of Angband in the original publication. An oversight? Incomplete? It could be a number of factors that kept it out.

There was a later and larger map which included Angband and territories further North. 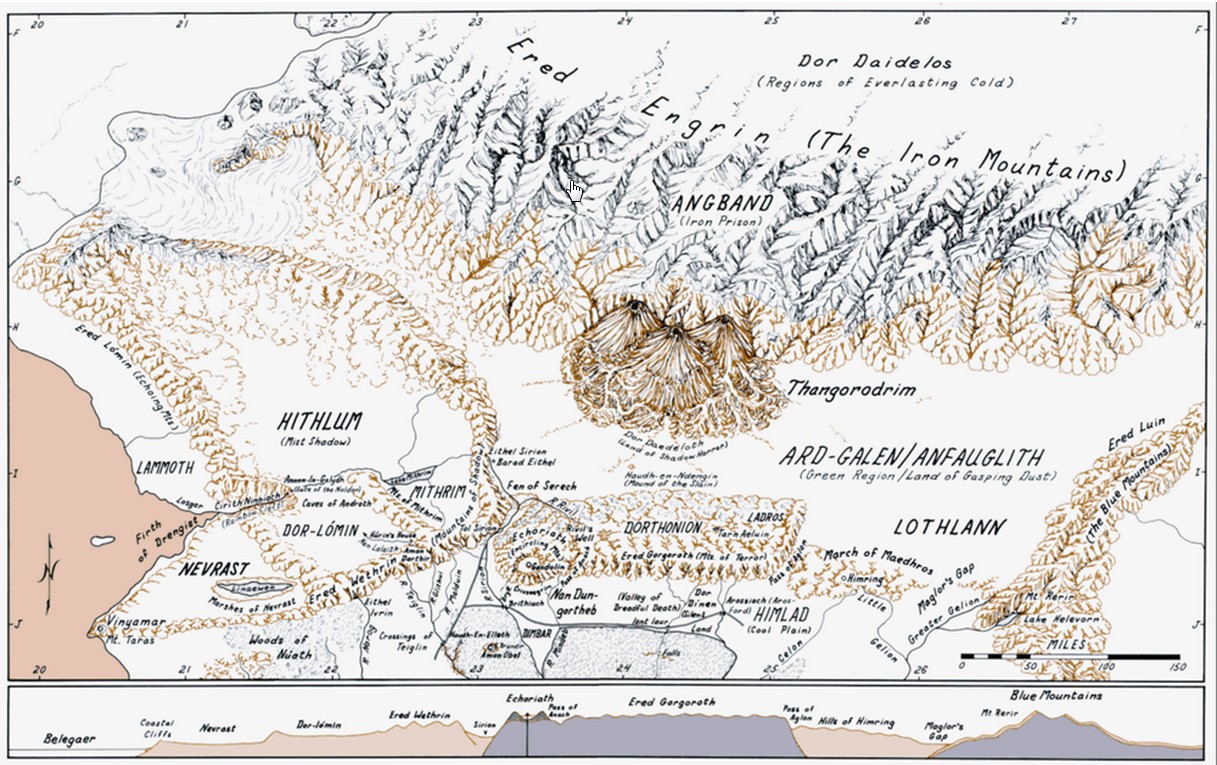 The Second 'Silmarillion' Map is a map (on four sheets) drawn by J.R.R. Tolkien of Beleriand, dating from the early 1930s. A redrawn version of the map was reproduced by Christopher Tolkien in 1987 as an Appendix to The Lost Road and Other Writings. This map was the basis for the Map of Beleriand and the Lands to the North included in The Silmarillion (1977).

The War of the Jewels (1994) provided yet another reproduction of the Second 'Silmarillion' Map, featuring "subsequent alterations and additions", with commentaries on the changes. Furthermore, Christopher reproduced in the same volume a redrawn version of a photocopy of the North-east section of the same map, kept and annotated by his father.

As far as I know, neither Angabnd nor Thangorodrim appear in any print copies of The Silmarillion. I did manage to find a fan-made map of the northern-most region of Beleriand, which shows Angband in relation to Dorthonion and Anfauglith:

I'm not aware of any out-of-universe reasons for not including it; from an editorial perspective it seems like a strange omission, for exactly the reasons you note.

In-universe, it's because The Silmarillion is meant to be Bilbo Baggins' translation of ancient Elvish history (Particularly ancient Noldorin history). The maps are similarly Bilbo's recreations of ancient Elvish maps. So the reason is basically that the elves never got around to mapping that region.

It's not hard to see why they made that decision. After leaving Aman the Noldor were pretty single-minded in their pursuit of the silmarils, so exploration of other lands wasn't high on their priority list. This would explain why official maps are most detailed around Elvish settlements.

There may also have been political motivations. Obviously the Noldor weren't on friendly terms with Morgoth, and didn't often venture near his lands. There's not much incentive to put your enemy on a map, especially when everyone knows exactly where to find them (Just look for the three massive volcanoes that dominate the northern skyline).

The simplest explanation, though, is the same one that explains why Mordor is so poorly-charted in maps of Middle Earth in the Third Age: nobody knew a whole lot about the Iron Mountains at this time. As far as I know the only beings who went to Angband and lived to tell about it (Before the Battle of Unnumbered Tears, at least) were Beren, Luthien, and Hurin (Father of Turin). Not many opportunities for cartography.

Not the answer you're looking for? Browse other questions tagged tolkiens-legendarium the-silmarillion map or ask your own question.

46
Why did Caradhras not want the Fellowship to pass?
22
Why did the Rings turn Nazgûl invisible and their clothes visible, while The One Ring turned both invisible?
13
Why not drink from the source spring of the Silverlode?
38
Why not use the Ring?
30
Why did Christopher Tolkien remove all references to England and Ælfwine from the published Silmarillion?
2
Does any Tolkien book state why Elros chose the gift of men?
6
Why is the Westeros map rotated?
6
Why did Manwe not understand the concept of Evil?
23
Why, in The Silmarillion, does Melkor disappear forever and leave Sauron to reign as some kind of “Melkor copy”?