The 13th Doctor, Capaldi, showed up in "The Day of the Doctor" when the Doctors froze Gallifrey.

So, if the 12th Doctor saw him back then, how come he thought he was the last Doctor at the episode "The Time of the Doctor"? Could he have just forgotten?

TL; DR: Yes, it's possible that during Time of the Doctor, the Eleventh Doctor has forgotten his future self's involvement in the saving of Gallifrey.

To add to the answer by Hypnosifl and to answer the specific part of your question "Could he have just forgotten?", remember that the War Doctor and the Tenth Doctor (and by extension, the Ninth) don't retain the memories because of the muddled time streams, but the Eleventh does, because it's his present. Capaldi's appearance, though, would be from his future, and so it's entirely likely that he doesn't remember it for the same reason.

Maybe it's that Time Lords can't generally retain memories of interactions with their future selves. This is a consequence of the Blinovitch Limitation Effect shown with the Brigadier in Mawdryn Undead -- the younger version can't remember the interaction with the older. It also explains why the Fifth Doctor doesn't recall being pulled into the Death Zone in The Five Doctors despite having been there three times previously. (I say "generally" because it seems like the Second Doctor remembers the events of The Three Doctors during his conversation with the Brigadier in The Five Doctors. However, since the Time Lords deliberately brought the three incarnations together, they may have had some way to circumvent the effect.)

Granted, the events of Time Crash seem to contradict that since it implies that the Fifth Doctor would remember watching the Tenth fix the TARDIS, but that could be explained by the memories of the younger simply being suppressed until he "catches up" with the future events. So he does remember, he just doesn't remember that he remembers until he's on the other side of the conversation; that is, when he's Ten.

This also accounts for Eleven's line in Day of the Doctor, "This is where I come in." That implies that he remembers meeting his future self when he was Ten, in spite of explicitly saying that Ten won't remember. The memories are still there, just inaccessible until the most forward point in the timeline. At the point where the time streams cross, Eleven suddenly has access to the memory his past self made, leading him to remark, essentially, "Oh, right! This happened. I'd forgotten."

I don't think there was any on-screen evidence that the 11th Doctor noticed the presence of the 12th, only one of the Time Lords on Gallifrey commented on the appearance of a thirteenth Tardis beyond the ones belonging to the first eleven numbered "Doctors" along with the Tardis of the incarnation played by John Hurt (whatever you want to call him, since fans seem to have agreed on the convention that he won't be referred to as a numbered "Doctor"). From the transcript here, the lines from two Gallifreyans in that scene are:

GENERAL: I didn't know when I was well off. All twelve of them!

ANDROGAR: No, sir. All thirteen!

(A new pair of grey eyebrows is seen.)

Later, in the shot with all the Doctors standing together, Capaldi's 12th Doctor doesn't appear (though it doesn't really matter anyway, since as someone pointed out to me on another answer, this scene was actually described by Eleven's narration as a dream): 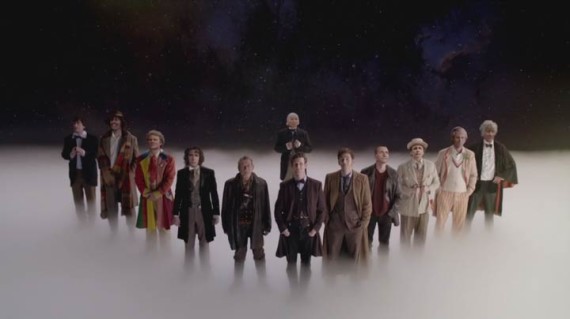 There's no way for certain that he saw the 12th Doctor. Even if he did, his memory of Time War was hazy, because, as he says to the War Doctor, "The time streams are out of synch"

4
Why didn't the Doctor know he would regenerate again?
6
Why do the first 10 Doctors (Hartnell-Tennant) have to forget the events of the 50th anniversary special, but the 11th and 12th Doctors do not?
4
How did memory work in Old Who multi-Doctor stories?