In Star Trek TOS, who is security chief, and how does the department function?

And like are there multiple officers under him with rank of Lt. or are most of them enlisted/ensigns?

Also, what would their duties be?

As with most of the original Star Fleet, the answer depends on what you consider to be "canon".

The sole mention of security leadership in the TV series is from TOS: Devil in the Dark when Lt Cmdr Giotto is detailed to assemble a security party. There's no specific mention of him being the Chief of Security and the official Startrek.com biography for him only refers to "a member of the U.S.S. Enterprise security team".

Prior to this, the security teams merely seem to be assigned by whichever bridge officer needs them, at the time that they need them. There's no indication that any of them hold a rank higher than Crewman.

The Star Fleet Handbook (written by Geoffrey Mandel, and later incorporated into the semi-canon USS Enterprise Officer's Manual) lists Lt. Cmdr. Giotto as being "Head of Security" as of Stardate 1307 when Kirk assumed command of the Enterprise.

His team appears to consist of one other Lieutenant Commander and various Lieutenants. Presumably there are Crewman below them in rank also. 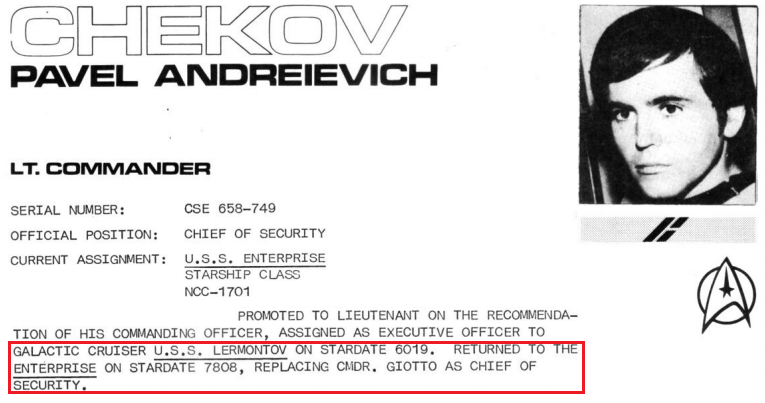 Starfleet is not a Gestapo

There is an interesting line in "Mirror, Mirror", when Scotty notes one of the differences he has observed between the barbaric Mirror universe and his own.

Mister Sulu is security chief, like the ancient gestapo!

The notion of a security chief is revolting to Scotty. Starfleet is an idealistic, radically peaceful organization, and this idealism is reflected in the noticeable tone of revulsion in Scotty's voice.

Others have observed that there is no named chief of security or security department in TOS. They don't exist because they are anathema to Starfleet at the time.

10
How could the Federation trust Worf to be Chief of Security?
20
In Star Trek, what are all the low-ranking Command Division officers doing?
19
Why is Miles O’Brien a Non Commissioned Officer (non-com)
11
Was Red Shirt Security a rotating detail, like K.P, or was it a dedicated branch of Star Fleet like the M.P's are to the US Army?
46
Female uniforms and colored panties in Star Trek TOS
7
Who were 'The Old Ones' mentioned in Star Trek TOS
14
Why is O'Brien who operates the transporter called Chief in Star Trek?
10
Why is there a prominent cadet on Discovery?
4
What are the criteria for advancing from Ensign to Lieutenant junior grade in Starfleet?
6
Crew rank distribution of the Enterprise D (or Galaxy-class)?