The cartoon had three characters. I remember one of them having an appearance where it's difficult to tell the gender. It was about them riding near-future vehicles and racing, intercepting each other along the way by offense. I definitely remember a rival-type character who shot arrows which glowed with his incantation, powerful enough to disintegrate a boulder of rock.

Anyone have any ideas? I saw it on (most probably) "Cartoon Network" back in England, at around 2008. It was so good, but I was only a kid then and forgot the title. 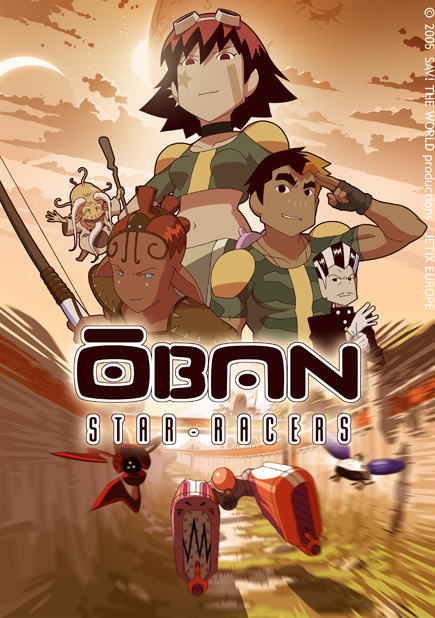 Originally produced as a short movie titled Molly Star Racer, a television series was developed in cooperation with Jetix Europe, with animation production by HAL Film Maker and Pumpkin 3D. It aired in more than 100 countries including Japan. In the US, the series aired on ABC Family and Jetix/Toon Disney between June and December 2006.

The three main characters are: 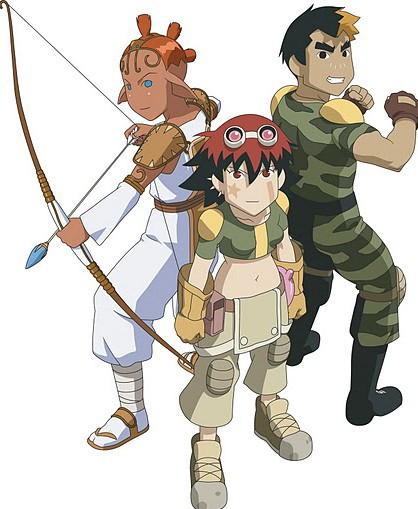 The main protagonist of the series. An ambitious 15 year-old Earth girl who often subverts her school studies to improve her mechanical skills. Upon escaping from her harsh boarding school, she travels to find her father, Don Wei.

Jordan C. Wilde is a 17 year-old rambunctious army cadet who is hired by Don Wei to be the gunner for the Earth Team.

A skilled gunner and a loyal team member, Jordan is the seventeen-year-old military cadet in charge of defending the Whizzing Arrow during the races. Handling his explosive female partner Molly, however, is not his strongest area of expertise.

The character you are thinking of using a bow is Prince Aikka. 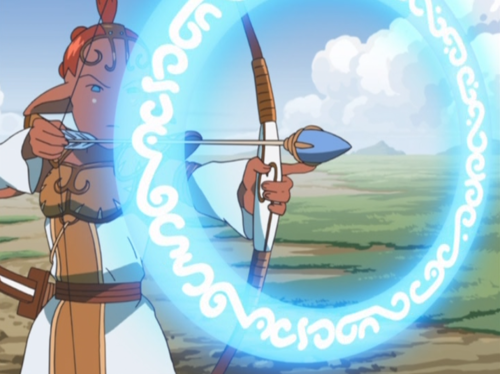 The Prince and Knight of Nourasia who races on the back of a giant flying beetle named G'dar, which acts as his vehicle. Noble, chivalrous and skilled in martial arts, he is a rival of Molly's, but also a close friend—since Molly finds him cute and the attraction seems to be mutual. Molly and Aikka promise each other that during their race they would not use weapons against each other, but near the end Molly is unable to prevent Jordan from firing. 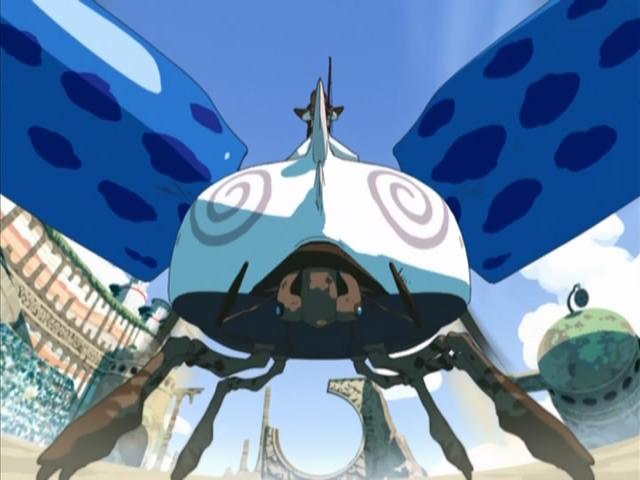 It's not Kerwhizz by any chance? From wikipedia:

The show is moderated by Kerwhizzitor (Jacob Scipio), the only regular live-action character. Three teams of CGI characters, each comprising a human child and a part-living, part-mechanical animal, must answer four rounds of questions, each featuring a regular 2-D animated character, to win a choice of pod mod for their respective racing pods. In addition, one round offers the chance to win a mystery mod. Each mod is an unconventional accessory that may or may not give its user a better chance of winning the race. The teams are cheered on by three groups of live-action children dressed in the teams' colours and waving team flags.

All of the questions are multiple-choice, with the answers colour-coded red, green, yellow or blue (not coincidentally, these are the standard colours of the function buttons on TV remote controls). Once the question rounds are complete, the teams' pods are assembled around them and the respective mods are installed. The pods are then raised through the roof of the studio into the CGI race world. Each race world is a themed environment (the questions usually include clues to the theme) containing three, or occasionally four, zones, and each race comprises two laps (except in "The Deserted Desert Dash", which is a novelty race with no set route and a hidden finish line). All of the teams are likely to encounter unexpected setbacks and opportunities along the way, making the outcome of each race unpredictable.

Here's a picture of competitor "Kit" with her pod:

1
Anime about a female who races spaceships in duels, father was also a racer