Is “Thoughts on a Clock” a real poem?

The poem Thoughts on a Clock, by Eric Ritchie Jr., is mentioned in the episode Time of the Doctor. Does anybody have a link to the entire poem? Was it written especially for the show, or modified to fit the episode?

The only extract I can find (from the episode) is:

And now it's time for one last bow
Like all your other selves
Eleven's hour is over now
The clock is striking twelve's."

I think it was written specifically for the episode.

Every mention of it that I can find online only refers to it as an “extract” and almost always includes a mention of Doctor Who. I’m also unable to find any mention of Eric Ritchie, poet or otherwise, that doesn’t include a mention of this poem.

As further evidence that this was probably a made-up poem, the Google Trends for “Thoughts on a Clock” and “Eric Ritchie” are zero until December 2013, when the two phrases suddenly spiked in popularity. If it was a real poem, I’d expect it to show up somewhere before it was mentioned in a Doctor Who episode.

(If nothing else, the Doctor Who writers would have Googled it, right? I mean, I know this is a universe with disappearing blue boxes and immortal aliens, but the idea that they use Bing really stretches plausibility.) 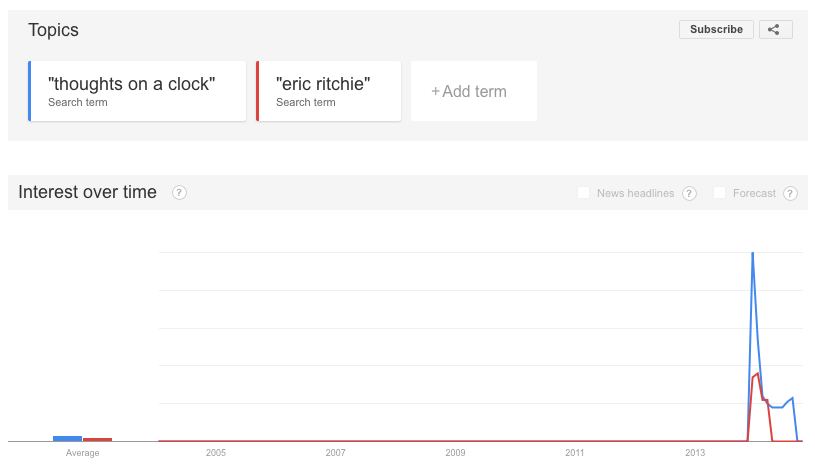 Not the answer you're looking for? Browse other questions tagged doctor-who poetry or ask your own question.

-7
What does this poem mean?

7
Science fiction poem that I read in American literature class
14
Trying to identify this post-nuclear bomb poem
5
Poem or short story: silver cocklebur(r)?
5
Poem or short story: alien child creates Earth for a science project
7
Who was behind the Eleventh Doctor's first ever 'Geronimo'?
3
What was the epic poem referenced in An Artificial Night by Seanan McGuire?