What is the TARDIS' true weight?

This question I have is similar to How much does the Doctor's TARDIS weigh from the outside? but different because I am wondering what its true weight is.

Is there anything in Doctor Who that hints at what the TARDIS' true weight is? In the most recent episode "Flatline", The Doctor states that if The TARDIS landed on Earth with its true weight it would fracture it.

Conceptually the TARDIS does not have crazy mass in our Universe because most of it ISN'T IN OUR UNIVERSE. We have seen the TARDIS carried off multiple times, in something small as a flatbed truck.

In Flatline, when the TARDIS was losing "dimensional energy" the outer representation (and that is all the shell of the TARDIS is; a representation of a portal to the smaller pocket dimension/universe within) the TARDIS lost dimensions and grew smaller. It was still portable and able to be carried around in Clara's purse. Nor did it appear to lose any of its internal dimensional spaces as it has in previous episodes.

Given what we know about just one room on the TARDIS makes the weight of the TARDIS vast, but calculable, if it were able to materialize completely within our Universe.

The Eye of Harmony Chamber

The chamber housing the Eye of Harmony has had multiple representations and they have varied wildly in the different versions of the series, but the one thing remains true. No matter its size, it produces chronal energy allowing the TARDIS the capacity to travel through time.

Given the Doctor's First Rule: The Doctor Lies...

While the Doctor said the weight of the TARDIS would fracture the Earth, I think he was underestimating it so that he wouldn't alarm Clara. Clara is a clever girl and probably suspects the true nature of the TARDIS already, but like most Humans, vast numbers and galactic scales simply don't truly make sense to our mortal minds.

Given what we know of the internal dimensional shifting and manipulations of space within the TARDIS:

In series 7 "Journey to the centre of the TARDIS" the Eleventh Doctor stated:

Picture the biggest ship you've ever seen...and now forget it, because this ship is infinite.

It even has a suspended star as a power source, according to this same episode, so my guess is that the Twelfth Doctor actually fell short in his statement: if the TARDIS landed on Earth with its true weight, it might probably destroy it...and the solar system along with it.

In the name of the Doctor, we get a pretty good idea of the true size of the TARDIS. With all of the dimensional shifting capabilities winding down, it appears to be around 5-700 feet high.

Assuming that 80-90% of this is empty space (and ignoring the fact that it appears to contain its own black hole), then the weight is presumably about the same as a building of a comparable size, something around 200-300,000 tonnes and certainly sufficient to "fracture the surface of the Earth" if it landed. 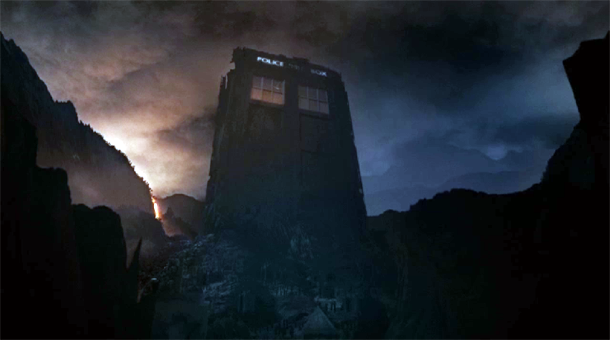 In the episode "Full Circle", Lady Romana pegs the weight at around 5000 tons but this may simply be the current weight (in some sort of "don't move me" mode) rather than the TARDIS' true weight

ROMANA: Adric, is there any machinery on your planet that could lift the Tardis?

ADRIC: How heavy is it?

ROMANA: Er, five times ten to the six kilos in your gravity.

The Weight of the TARDIS as mentioned by Susan in the Hartnell Era is approx. 68,000 Tons, however this may have just been based on the default interior Deadweight tonnage at the time, which in DWT only measures the rooms and people and cargo.. On the flip side tho, a TARDIS dimensional Transcendentalism is accomplished by the Relative Dimensional Stablisers which are separated into scales via Dimensional Field barriers. so while the core section for the ship is in a 1:1 relative scale with the normal universe, the RDS system can shrink a person, per each level of Dimensional Field Barrier (Dimension Dam for short) and would allow the scale factors to be smaller but the rooms relatively large or normal scale in those reduced scale factors lesser then 1:1 factor. now, in the case of the Eye of harmony, it's mass is held in stasis under the time factor, so while it is suspended in animation, inside the TARDIS the time that exists is given, but since the eye of harmony copy is a non-event inside a bubble dimension, it then doesn't have a measurable mass that can be defined in the overall weight of the ship.

The key to remember that the configuration of the TARDIS changes - in Castrovalva they jettison about 30 percent of the ship to generate thrust. It is reasonable to assume that earlier in his adventures (the series) It may have been smaller.

But the previous mentions of the fact that the interior of the ship are not truly within the confines of the exterior are important to remember. I'd be willing to bet that the relative weight of the exterior shell can be altered, at least to a degree. It's been moved with relative ease too many times for it to be impossibly heavy by default.

38
How much does the Doctor's TARDIS weigh from the outside?
15
Was it coincidence that the TARDIS in "siege mode" resembled the Pandorica?
0
What happens when a TARDIS falls over onto its door side?

19
The TARDIS forcefield
38
How much does the Doctor's TARDIS weigh from the outside?
7
What happened to the Coral TARDIS template?
26
Why didn't Clara die when traveling outside of the Tardis?
15
How can Ashildr pilot a TARDIS?
6
The risk of the TARDIS safeguard
9
Why did the Tardis turn red at the end of Turn Left?
1
What can cause the TARDIS to malfunction to the point of crash landing?
1
Why couldn't the TARDIS power both Tesla's Wardenclyffe Tower and its force field at the same time?