When I was a young boy living in Russia I came across a comic book that featured a space exploration team which made contact with not so friendly aliens who resembled Earth's insects, except that they were human sized and appeared to be at least as intelligent as the humans. Please help me find this book's name.

I must have read it in the late eighties or early nineties so I might be very foggy or downright wrong about some of the details.

More things that I remember

It is a classic Polish comic book called "Walka o planetę" (The Battle for The Planet) written by Arnold Mostowicz and Alfred Górny and illustrated by Bogusław Polch. It was part of "Bogowie z Kosmosu" (Gods from the Space) comic cycle published in 80s. The whole series has sold millions of copies in 12 languages, including Russian.

The cycle tells the story inspired by Erich von Däniken's hyptohesis of "ancient aliens". In mentioned book, the protagonists (human-looking aliens from planet Des) fight against insect-like alien race which want to take over Earth.

You got it right: 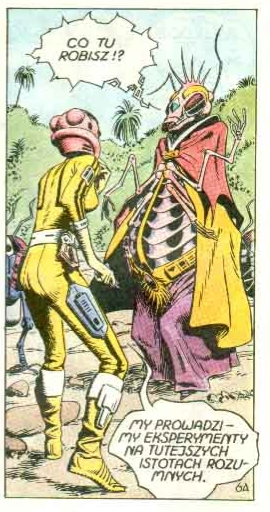 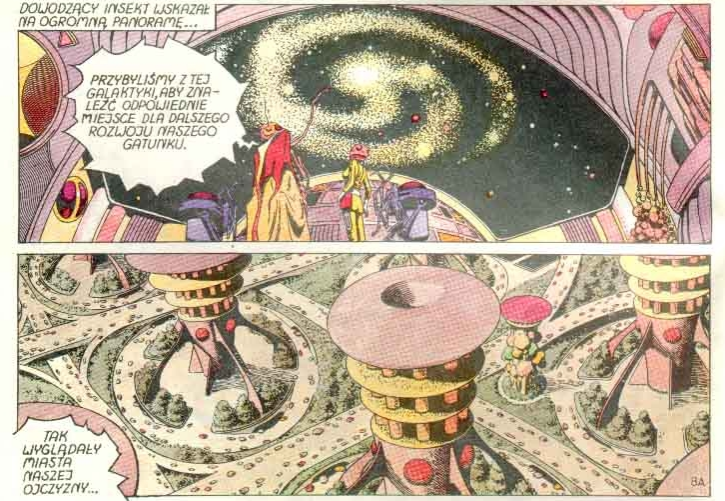 Not the answer you're looking for? Browse other questions tagged story-identification aliens space-exploration or ask your own question.

14
Story about human space explorers who run into alien telepath space crew
13
Relative morality among aliens: human individualism vs insect collectivism vs hedonism
10
Book from the golden age about insect-like aliens pretending to be humans
10
Short story about exobiology during human exploration of an alien planet
4
Old story about space exploration program with young adult crew
3
Story about aliens that look like giant caterpillars
6
Short story about humans landing on a planet met with human-like aliens
11
Looking for a late 1950s to early 1960s movie or TV show with some similarities to “The Zanti Misfits”
6
Story about Antarctic jungle with giant bugs and exploration team
4
Sci-fi novel about a planet with a semi-intelligent tree-like species, and a golden insect-like species