What was the image Dr. Juliet Burke carved in a tree in season three?

When Dr. Juliet Burke was sent to the camp of survivors on the beach by Ben, she carved an image on a tree as a sign for him.

What was that image?

The reason I ask is that the image could indicate a hint, an "Easter egg" put there by the author (J.J.Abrams?) to some other influencing work. I have an idea, but I'd like a confirmation on the image first.

update: So, to clarify. To me, that looks just like a "stylized Cyrillic Zhe" (Ж) symbol, with the associated connotations of hinting at the Strugatsky brothers' "Beetle in the anthill" - where such a symbol on an external device as well as on a subject's body was prominently featured. I take it as the hint that JJ is a fan of theirs. Their creation is really high grade.

Another hint at the cross-influence is the giant, dangerous, extremely fast-moving arachnid with hands in the "Super 8" 2011 film by JJ (though in Strugatsky's Noon universe those weren't intelligent).

The image you're referring to is generally called (by fans of the show) the "Tree Mark". You can read some additional info about it on the Lostpedia here. 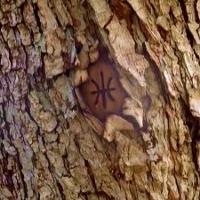 Given that the show has repeatedly referenced other alchemical symbols (Juliet has the symbol for Spirit branded on her neck) it seems most likely that it's at least inspired by the historic notation for Ammionium Salt, otherwise known as Sal Ammoniacus)

Not the answer you're looking for? Browse other questions tagged lost influences easter-egg or ask your own question.

38
What was LOST About?
12
In the episode “The Other Woman”, was the present day Harper character really the Man In Black?
8
Why was Locke led to the Pearl Station?
9
What was the exact reason behind Ben killing this character?
13
What was the point of the hatch?
9
What did John Locke give to the island in Lost?
7
Who or what was David Shephard?
8
Was the Oceanic flight 815 pilot the only one attacked by the monster?
3
What was the deal with Charles Widmore?