Name of a Batman movie with different variations of Batman

About five or six years ago, I took out a Batman movie from the library, the name of which I forget, and the movie had different types of Batman's in it. For example, it had a robotic batman, an actual bat-man etc.

I have been trying for a long time to find the name of this movie but I can't for the life of me do so! If someone could be kind enough to help me out, that would be awesome!

It may be Batman: Gotham Knight.

This anime movie was released as a tie-in between Batman Begins and The Dark Knight. The first story (titled Have I Got a Story for You) is about four kids that share stories about Batman, kind of "I saw him once and he looked like this". One of the kids describes him as having a robotic armor: 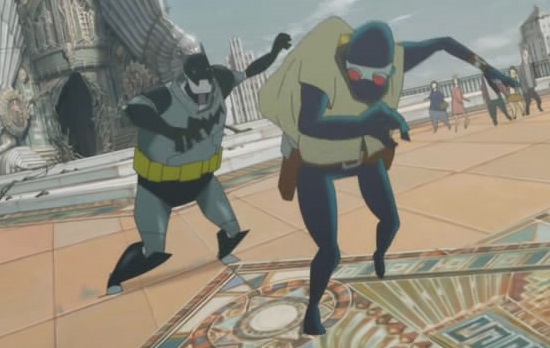 For another, he was sort of a vampire and could fly with his huge wings: 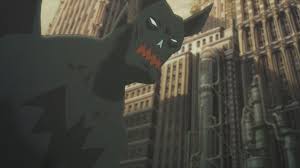 One other kid describes him as able to turn into a shadow. The fourth kid never saw Batman, but then Batman and the bad guy he has been fighting across those mini-stories show up where the kids are skating, and this fourth kid gets to see Batman and he looks normal.

Other stories involved Batman trying a device from Lucius Fox that would deflect bullets; Batman fighting Killer Croc, The Scarecrow and Deadshot; helping two GCPD officers who get caught in the crossfire of rival gangs; and a story of Bruce Wayne learning to control pain. All episodes are anime, but Batman may have slightly different looks in each one of them.

In Batman: The Brave and the Bold, Season 3 there is an episode titled "Time Out for Vengeance"

It featured the following:

and, of course, a normal batman.

Not the answer you're looking for? Browse other questions tagged story-identification dc batman or ask your own question.

14
Is there an explanation for why Silver Age Batman used guns?
24
How does Bane know Bruce is the Batman?
33
Why does Bruce Wayne keep speaking in that low raspy voice to Catwoman?
11
Do Batman villains typically have super powers?
16
Looking for a Batman Comic where Batman had real wings
4
1980s Vampire Movie Name
12
Batman and Batboy: Identify story?
5
Has Batman ever unintentionally/accidentally killed someone?