Where is the Consortium of Trao?

In the Farscape episode 'Throne for a Loss' (season one, episode four) The Trao are introduced as the first of their line is imprisoned with Rygel. It is explained by Jotheb that the Trao span many worlds (around 10,000) and have a population of approximately 40 trillion. Whenever Rygel says he's never heard of the Trao, Jotheb says that the imperfection is his which seems to imply that the Trao have also interacted with many other races.

As it seems they are at least as powerful as the Peacekeepers or the Scarrans so I'm wondering, where are the Trao after this episode and why don't we seem them again?

Please note that I'm looking for a in-universe answer.

The short answer is "we don't know". Not only do we not see any real star maps within the series but the galactic geography of Farscape is baffling at best.

Hypothetically, it may be that the Consortium of Trao is contained wholly within the Uncharted Territories (which would explain why Rygel hasn't heard of them) or that it's along the anterior border of Scarran space or it may simply be that Rygel is clueless about geography outside of his own back yard. 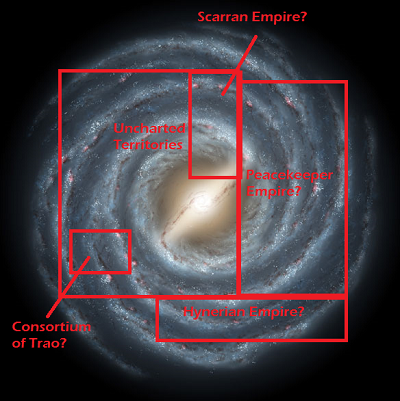 Not the answer you're looking for? Browse other questions tagged farscape or ask your own question.

3
How accessible are the Farscape comics?
9
What was the 1st episode of Farscape to feature a Scarran?
6
In season 3 of Farscape, where did Jothee go?
10
How were the DRDs on Moya operated?
7
Farscape: Leviathans in the wild
3
How did Crichton know where to find Jool in S4E2 (What Was Lost)?
2
In Farscape, did Earth use the Translator Microbes from Moya's DRDs?
7
What had Zhaan done to be imprisoned?
3
Looking for an episode of Farscape where Rygel goes back to his planet with Chiana and Ka Jothee
21
Why don't the crew of Moya know the location of their homeworlds?