Why don't they use short wave radios in The Walking Dead?

Nothing stops them from doing so. Should they be fortunate enough to come across one in working condition and also have the means to power it, a shortwave would be a decent addition to their equipment.

Nothing stops them from using a shortwave radio but the availability of having one. Yes, it would be possible to recharge one using a portable recharger and such technology would have existed in the period the Walking Dead is set in (presumably it is close to our current time frame).

TL;DR: We can assume that the survivors would consider using some form of radio communications technology if the opportunity presented itself.

This is now clear, because in the comics, Eugene recently traded beer for an old CB radio, and has since repaired it and begun using it.

There is no explicitly mentioned reason for them not to do so, now that they are in a permanent settlement with access to solar power. It hasn't come up yet on the show.

Prior to the group's arrival at Alexandria, however, they were wandering around aimlessly, fighting for survival, and didn't know where their next meal or drink of water would come from. They certainly couldn't lug around a solar charger at that point. They were dying of starvation and dehydration. Communication was the least of their problems.

Now that they are in Alexandria, it isn't a priority:

Even now, they have been at Alexandria for some time, and have a decent supply of electricity, but they simply have more important things to worry about than talking to strangers who are almost certainly in the same position they are, if not worse. There is too much going on and not enough time - or incentive - to think about anything beyond mere survival.

In the short time that Rick's group has been in Alexandria, they have been careening from one crisis to the next. First, no one trusted them. Then the Pete and Jessie issue happened. Then the Wolves attacked. Then the zombies from the quarry escaped and had to be dealt with. Then they had to rebuild the community and repair the damage done by the Wolves and the herd. Then they met Jesus and discovered the Hilltop. Then they went to war against Negan and the Saviors. And all this time, they've been struggling just to feed themselves. At no point since their arrival in Alexandria have they had a decent chance to even think about communicating with the outside world.

Even if they get things under control, it might not be a very good idea:

After Rick's group sorts out the Saviors and achieves some sense of normalcy, there will still be another issue to consider: As has been made quite obvious already, zombies are really a secondary concern at this point. The real threat is other human beings. Rick said, at the end of the season 5 finale, that people will come and try to take Alexandria for themselves, and Rick will teach the Alexandrians how to fight back. But in this world, the best defense is not really a good offense: the best defense is not letting your enemies know that you exist.

Using radios would jeopardize the group's anonymity and relative invisibility. If someone overheard a radio communication, they would instantly realize that a community of people was out there somewhere, and would begin to look for it. That would be incredibly dangerous for the Alexandrians.

In recent issues, Eugene obtained an old Citizens' Band radio and began to use it. Over the last three issues (#151-#153), he has been talking to a fellow survivor at an unknown location. 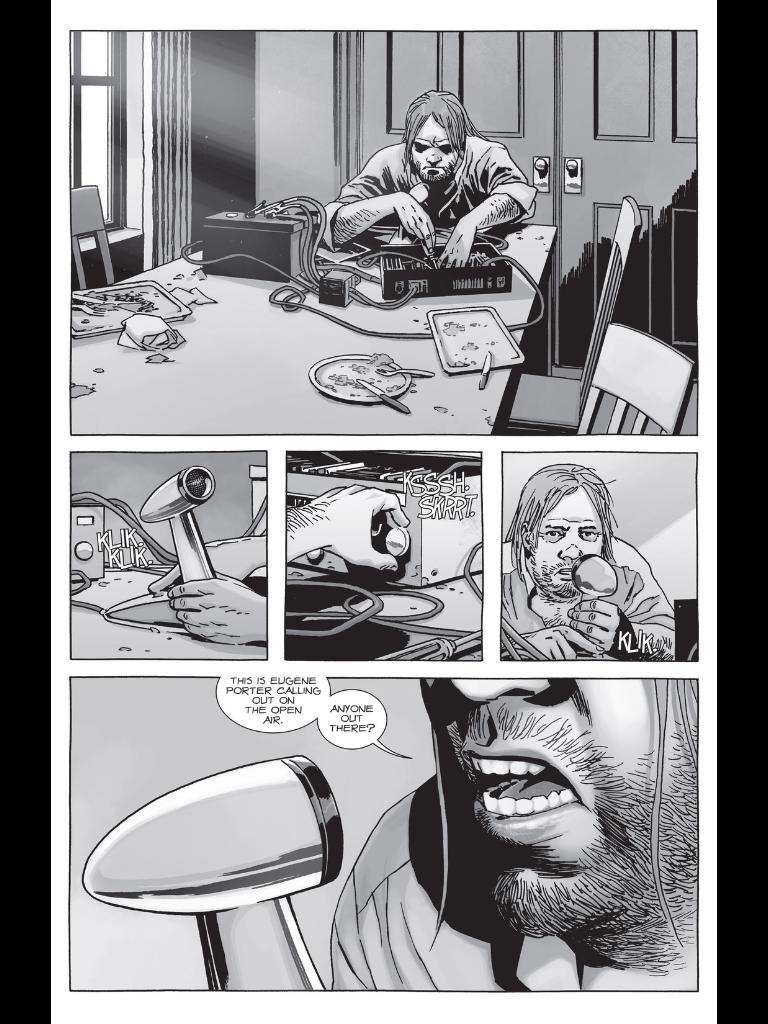 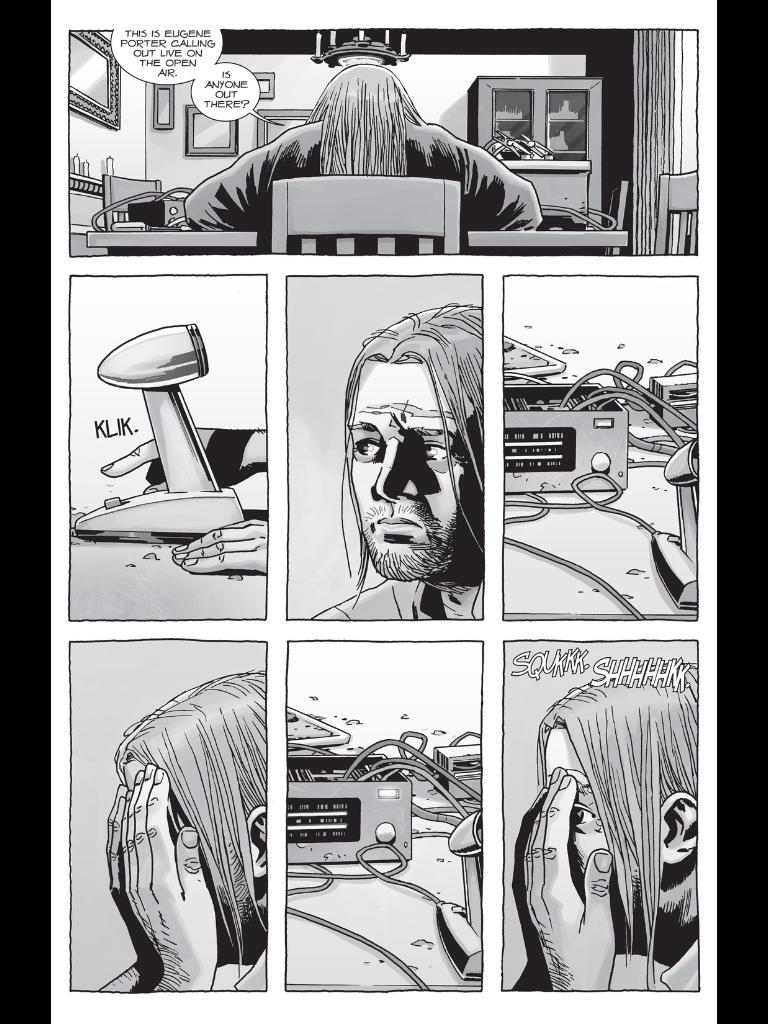 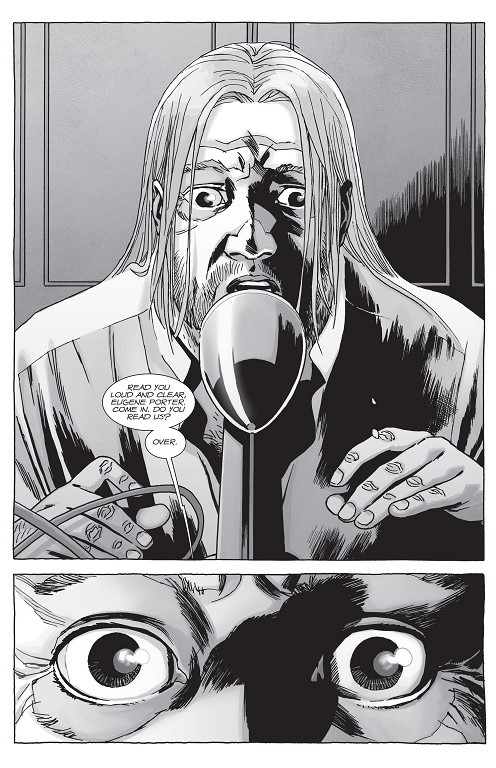 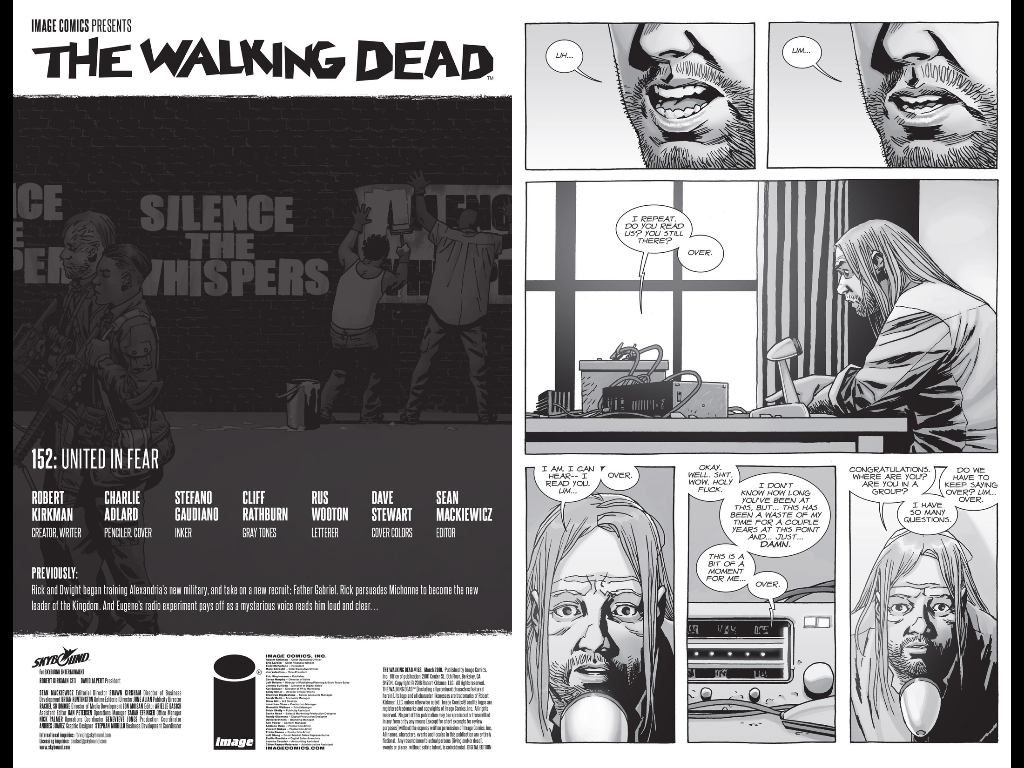 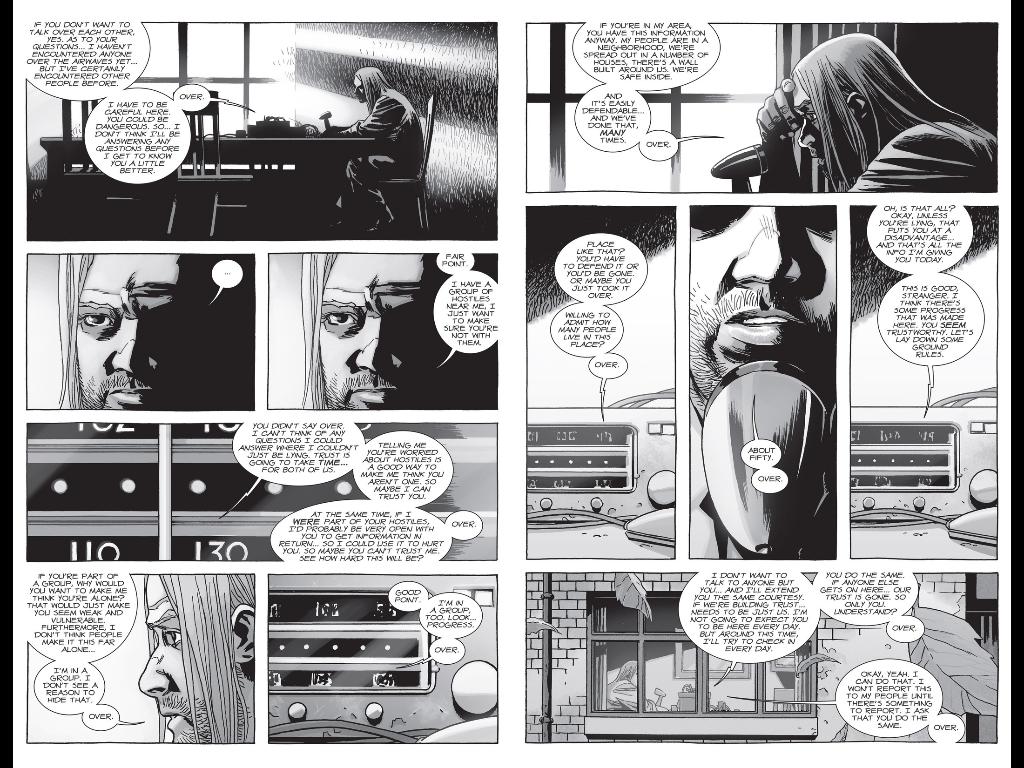 As you can see, there is still the question of whether Eugene can trust his new acquaintance, and the acquaintance is still reluctant to trust Eugene. By this point, everyone who was foolish enough to immediately assume the best about new people is dead, and everyone who is left knows that new people are best treated as enemies until they have proven otherwise.

Short wave frequencies (i.e., HF) are used for very long distance communications. They would not be using the short waves for intra-group communications, but to communicate with other parts of the world.

They would use VHF and UHF frequencies (e.g., CB, handheld radios) for local, and regional communications.

They probably could scrounge around and find a shortwave radio and power it using a DC inverter and plugging it into a car for power.

I think the real question is to ask whether or not they would want to contact other groups. They have been burned by their recent interactions with the others, so I'm not sure if they would be willing to trust anyone else new, at least for a while.

Rick didn't even trust Gabriel, and he wouldn't hurt a fly.

Virtually all HF/VHF/UHF radios can run on DC in varying amounts of voltage. Many HF (shortwave) transceivers run on 12V DC, so they can be hooked up directly to a car battery. Some CB radios run on 12VDC. Others, such as handhelds for VHF, UHF, etc. run on lower amounts of DC, but those are easy to convert. Inverters switch AC to DC and vice versa. Converters, such as step-down converters will take 12VDC, for example, and step it down to 6VDC or lower.

Hope this clears it up a bit.

Not the answer you're looking for?Browse other questions tagged the-walking-dead communication or ask your own question.