Where do we get the idea that Superman changes in phone booths?

I have heard many references to the fact that Clark Kent will enter a phone booth and change into Superman. But, in all my experience with the Superman comics, I have yet to see this take place even once. Where do we get this idea?

*Note: I am basing this answer off of this great write up on this exact subject.

Yes, Jerry Siegel and Joe Shuster (creators of Superman) used a phone booth for Clark Kent to change into Superman in a Sunday newspaper comic strip in late 1942. Clark, seeing that there is a job for Superman, excuses himself from Lois by arranging to be called away by a bogus phone call. While inside the phone booth he says to himself, "This definitely isn't the most comfortable place in the world to switch garments, but I've got to change identities - and in a hurry!" Yet this was not the very first time Superman found himself changing clothes inside a phone booth. 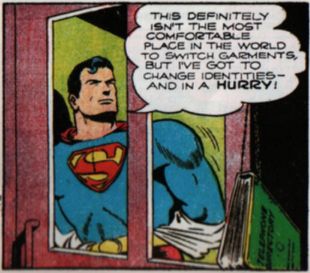 The article goes on to explain that Superman never used a phone booth in the George Reeves show, but that he did use a phone booth in the radio show and in a Broadway musical. In the original Christopher Reeve movie, there is a small joke made that a phone booth would be too small to change in. In Superman 4: The Quest For Peace, however, he changes in one. He uses them again in the Lois and Clark and Superboy TV shows.

Over the years, the media has inextricably linked phone booths with Superman, even if they have a tenuous relationship at best. 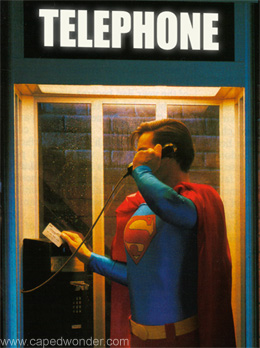 The first mention of a phone booth appears to be an old Superman cartoon from 1941.

To my knowledge, Clark Kent first changed to Superman inside a phone booth in "The Mechanical Monsters", the second of 17 Superman cartoons produced by Fleischer Studios for Paramount Pictures. It was released to cinemas on November 28 in 1941.

Having phoned in the news of the robbery to the Daily Planet, Clark exits the phone booth to find Lois missing, looking up he sees the Mechanical Monster flying away, so he darts back inside the phone booth and changes to Superman.

16
How did the Kents raise a super-baby?
3
What reading order would get a comic newbie into Superman Rebirth?
26
Could a recording be used to send Mister Mxyzptlk back to the Fifth Dimension?
7
How did Superman get his electrical powers in Superman Blue?
6
Did Tom Welling ever actually wear the Superman suit on camera?
29
What Superman story was it where Lois Lane had to breathe liquids?
19
Has either Batman's or Superman's identity been accidentally revealed by someone in the comics?