Does Starfleet have self-activated teleport technology? If so, have they ever used it?

I've seen multiple situations where non-Starfleet beings teleport themselves to and from different locations by using a self-activated handheld device, i.e. they do not have to call their host ship to request a "beam up".

Why is it that the Starfleet crew needs to contact the teleport room operator to request a teleport when the technology exists to handle it by oneself?

I understand that shields need to be down in order to initiation a teleport but, even in situations where shields are down, a request for teleportation to the host ship still needs to be done.

Yes, the general procedure you are describing is a site-to-site transport.

The first known use of this technology: While on Earth in 1986, Montgomery Scott utilized site-to-site transport capabilities on board a Klingon Bird-of-Prey to transport an away team directly from the elevator of a hospital facility to just outside where the ship was parked. Technically, this was the chronological first known utilization of this technology. (Star Trek IV: The Voyage Home) 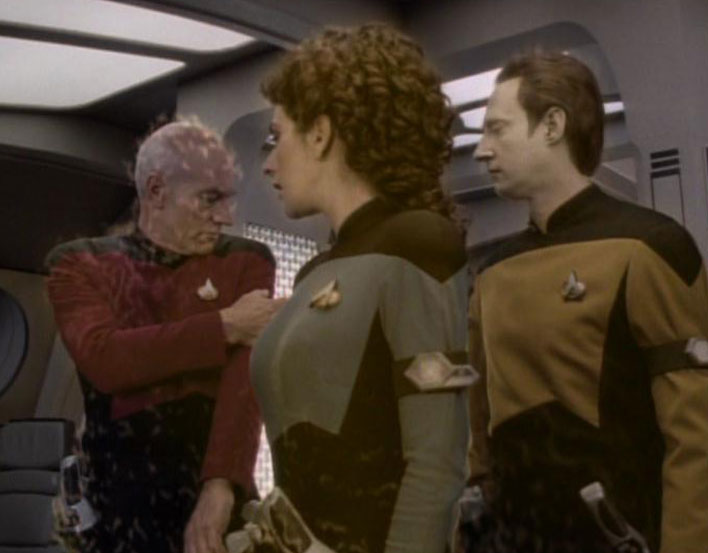 An emergency transporter armband was a device used by Starfleet personnel during an away team mission to remotely activate the transporters of a starship or runabout for an immediate beam-up in the event of a dangerous situation where verbal communication was not possible, preventing a request for transport in normal circumstances. The armband comprised a type-7 phase discriminator and a subspace emitter. (TNG: "The Best of Both Worlds")

Experimental Transport Technology: The Next Generation

There is also the emergency transport unit technology which was largely experimental during the TNG series of Star Trek.

Yes, Geordi gives Data a badge/pin that will teleport him back inside of the Enterprise should he touch it even with the shields up/teleporters down (at least that's what it seems like he said). This is from Star Trek Nemesis. Data uses it on Picard as Data sacrifices himself to blow up the Scimitar (the Romulan ship).

Not the answer you're looking for? Browse other questions tagged star-trek teleportation or ask your own question.

19
Why does Azazel not have to see to teleport?
12
If the Klingons joined the United Federation of Planets would they have to give up their cloaking technology?
6
What communications technology is used by Starfleet com badges?
5
Why didn't they have multiple vorta clones activated at once?
4
Why didn't they apply force on the primitive civilization which used to make Starfleet officers gladiators?
22
How could Janeway have used Holodecks as a child when they were new to Picard?
32
Did Starfleet ever have an Enterprise-class of starship?
15
Have there been any examples of 'advanced' technology used for fetal medicine in the Star Trek universe?