How does Oliver Queen fund his "extra-curricular activities"?

I understand that, in seasons 1 and 2, Oliver had the resources of his crazy-rich family and Queen Consolidated. However, as of season 3:

- He doesn't have any access to QC resources (Except what Felicity can hack into)
- He doesn't own The Foundry
- Despite the fact that his family was exceptionally rich, he now has essentially no non-Arrow-related assets. I initially didn't believe this, because you'd think his family would have had investments in things that weren't Queen Consolidated, but this was confirmed in season 3, episode 4; Oliver is broke

The only member of his entourage who seems to have a full-time job is Felicity, who worked part-time at a consumer electronics retailer until early in season 3. So they're not floating him any money.

Despite this lack of apparent funds:

On a related note, where does he live? I could accept that he sleeps at The Foundry, he's done that before, but does the abandoned nightclub most recently owned by his most sworn enemy have bathing facilities? On-site laundry?

I realize it's entirely possible that this hasn't been answered, but I'm still curious: how exactly does he pay for all of this? Have there been any indications from cast or crew in non-televised media (Interviews, Twitter, Reddit AMAs) to suggest an answer?

Thea asks that Oliver move in with her, simultaneously indicating that she knows he's broke and that his living situation is less than ideal. He's clearly not living at the Mansion (The season 2 finale clearly shows him leaving the place empty and abandoned), and Thea presumably knows this. So where does she think he's living?

As of the beginning of Arrow's 4th season, most of the money that Oliver's team spends appears to come from Felicity. She is now the CEO of Palmer Technologies (somewhat ironically putting her in charge of Oliver's company), and she seems to have no problem "borrowing" equipment from the company as well.

The source of funds during Season 3 is a bit more speculative, but with the release of the Arrow: Season 2.5 comics, some of the speculation has been confirmed. For starters, Felicity had a much better job than the one we see in the S3 premier: she worked at Kord Industries, apparently doing long hours. (She doesn't have this job by the start of S03E01.) 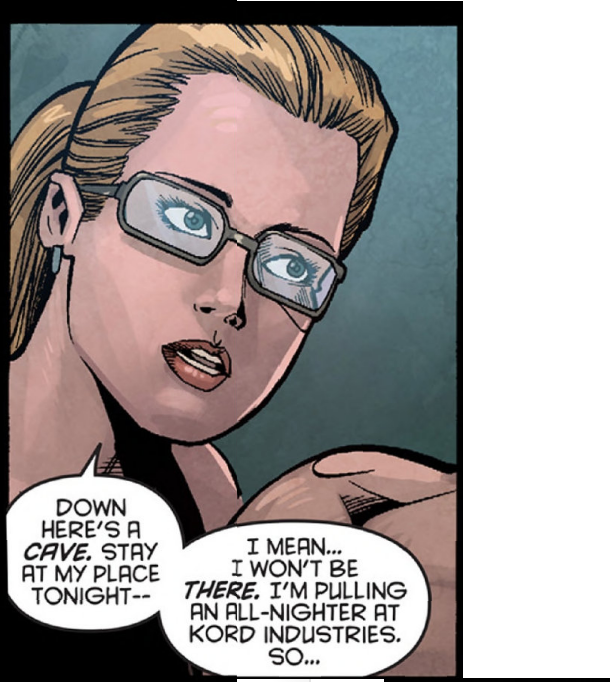 But more importantly, Oliver did get some inheritance from his mother, which was not a Queen Consolidated asset: her life insurance. 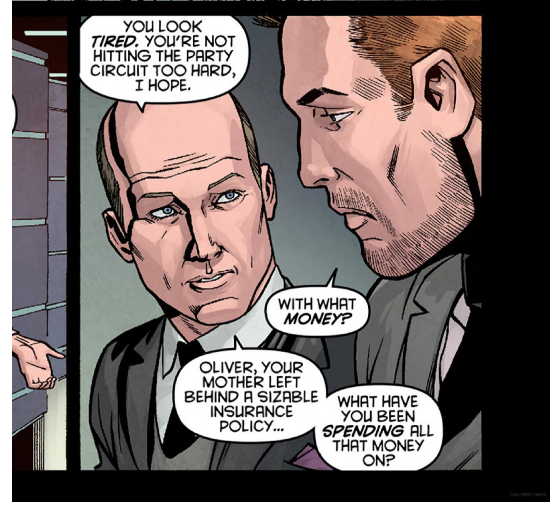 If we just look at evidence from the televised episodes, this issue is mostly glossed over in the show; I suspect we as the viewer are supposed to silently fill in the pieces with whatever we can imagine, or else just ignore the whole thing. Having said that, there's a couple of contributing factors that might help keep them float, at least for the short time before Felicity became VP of something or other at Queen Consolidated:

Diggle and Felicity are both millionaires... In the graphic novels Oliver gave them a million each as "severance" before leaving tk go back to the island after the undertaking.

Remember William Tockman in the 14th episode of season 2. Oliver asked Felicity to liquidate 800,000$ of his QC shares and transfer the money to his personal account to lure Tockman.

I don't know if this one sounds viable or not because Oliver mentions to Thea that they are broke when they are in her new penthouse or whatever it is which she buys off of Merlyn's money.

Please let me know if this one sounds as a logical explanation or not as even I am curious to find out about Oliver's spending habits considering he is broke. Well, billionaire "broke" as someone stated here.

My guess is that Oliver still has some money in his trust fund, which is probably how he funds everything, considering that he probably lives in the Arrow cave, now with Thea for free(he's basically a former billionaire mooch). I imagine that Diggle and Felicity probably help out as well.

Remember that in the beginning of Season 1 he attacked one of the people on his list and had him transfer 40 million dollars into an untraceable account. I would suspect that was to finance his crusade and its conveniently off the books, so that essentially covers it.

I would assume he has money hidden away. He never mentions being "broke" to Dig, Falicity, or Roy as far as I remember. Also he is a member of Bratva so I would assume he gets some type of that illegal income. If I remember my mafia information (Been years since I researched the mob) high ranking members get a cut of all income. As for telling Theia "they are broke" he's hiding his time off and on the island from her, I doubt he would admit to having money from those five years.

2
How did Oliver Queen lose his money?
2
How did Oliver Queen get his scars?
8
How could nobody recognize Oliver Queen as Arrow
6
How can this fall in Arrow plausibly be survived?
8
Why does Thea forget who the Arrow is in season 3?
5
How does Malcolm Merlyn fake death?
0
Could Sara have cheated death a second time?
6
How did Susan make the connection to Oliver Queen being the Green Arrow but not the Hood/Arrow?
4
Are Thea and Wally's hospital scenes supposed to be the same place? Or did they just reuse sets?