Does being worthy negate the weight of Mjolnir?

We know that Thor's hammer has a weight, and that the weight is irrelevant to the ability to wield Mjolnir - but rather how worthy the wielder is.

However, most of the people who have canonically wielded Mjolnir have been quite strong - Captain America, Beta Ray Bill - even a regular human paramedics would have some strength as part of the job. For example, if an replica of Mjolnir were made of regular steel, Captain America would easily be able to wield the estimated 30-50kg hammer.

However, has there been a situation where someone was deemed "worthy" to wield the hammer, but would not have normally had the strength an equivalent non-enchanted hammer, but was still able to lift it? For example, Thor is immobilised, a small child of pure heart is nearby and is able to lift the hammer to free him?

Similarly, if one is worthy of wielding Mjolnir, do they gain the equivalent strength to lift anything of comparable weight or just the hammer?

If we assume Mjolnir when stripped of all enchantments has a fixed weight, and that weight for arguments sake is 100kg, it would stand to reason that the only people capable of wielding it would be super strong. This question is about how the enchantments alter how wieldable it is. Lets assume a small child was deemed worth by Odin of wielding Mjolnir, but this child can lift at most 20kg. The enchantment is useless, as even though the child may wield Mjolnir, it effectively cannot because its not strong enough to lift the unenchanted weight.

One example that springs to mind is the best-named hero in the Marvel Universe: Throg, Frog of Thunder, a member of the Pet Avengers1. Throg was a human football (American football) player who was transformed into a frog by a Gypsy curse. And not a human-sized frog either: a normal-sized frog. Here's a picture of him next to a regular-sized goat, for reference2: 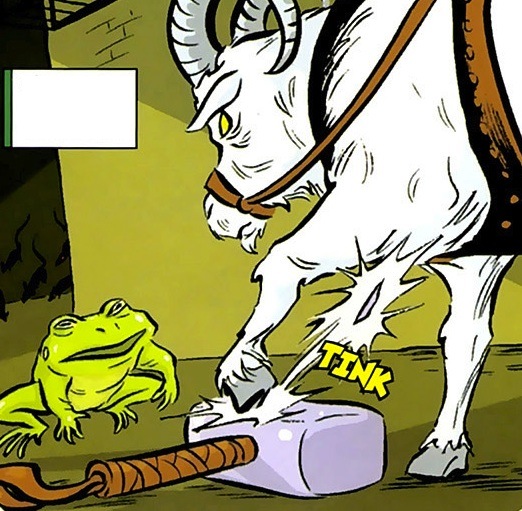 Initially, Throg (Who was called Puddleglup at the time) had no superhuman3 powers; he was just a dude who seriously pissed off a gypsy and got turned into a frog. As one does.

In his first appearance, Puddleglup was deemed worthy of the Power of Thor. However, he never attempted to actually lift Mjolnir in its entirety. Instead he lifted a shard that broke off when Thor was fighting, and that shar transformed him into Throg.

However, in the same issue Thor had been turned into a frog by Loki, and he was able to lift Mjolnir with only minor difficulties: 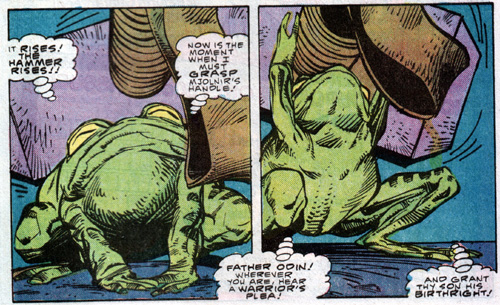 SInce we had no indication that Thor in his frog-form was any more physically powerful than a normal frog, we can speculate that Throg would also be able to lift it. While I hesitate to say that he could actually wield a full-sized Mjolnir, even lifting it is not something you'd expect from a regular Earth-frog.

A better example would be the duplicate Jake Olson, who was essentially a golem created by Loki and inhabited by the revived spirit of Jake Olson. This duplicate had a complicated relationship with Thor (They shared the same body for a time), but he was otherwise a perfectly ordinary human - . In "Thor Vol. 2 #67", Jake picked up the hammer and used it against an increasingly-unstable Thor.

To answer your second question, when wielding the Frog-sized Frogjolnir, Throg possesses all the powers of Thor, including super-strength proportional to his size. That is to say, he's incredibly strong for a frog, but not as strong as Thor.

I suspect the same would be true for Jake Olson, although I can't say for sure.

Clearly when Odin said "Whomsoever is deemed worthy", he damned well meant it.

And just because I literally cannot get enough of this character, he's a picture of Throg in full Frog of Thunder regalia: 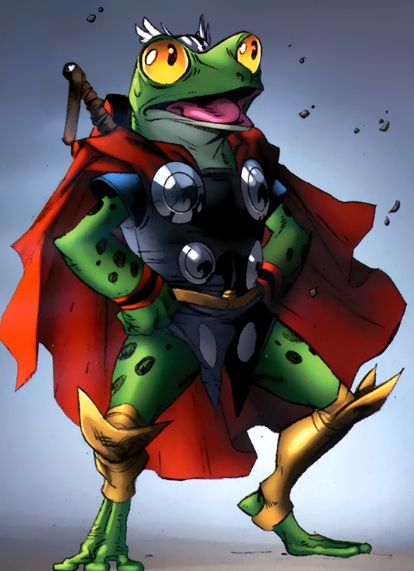 1 Because the 80's were a wonderful time to be alive
2 The hammer pictured is not Mjolnir; it's Frogjolnir4, a miniature version crafted from a sliver of Mjolnir.
3 Super-amphibian?
4 Because the writers had a theme going, and damned if they were going to break it

People make a lot of the "forged from a dying star" line, but frankly it's NEVER shown to be that heavy or powerful. It's almost always shown to be a hammer of normal weight (call it, a few dozen to a hundred pounds) that is WEIGHTED by magic, rather than a super-heavy object which is lightened by magic. If that hammer, even when wielded by someone worthy, was as dense as a neutron star, it would crack the planet when he smashed the ground, not simply break a sidewalk. And as many have pointed out, it would break any surface (including the crust of the Earth) it rested on.

To more specifically answer your question: I've never heard of anyone who was worthy being too weak to lift it, and those worthy of lifting it don't get super-strength toward any other objects, the enchantment on the hammer is simply lifted. Both of these point to the idea that the hammer isn't actually very heavy on its own, and that it's the enchantment which makes it so.

So no, being worthy doesn't negate the weight of the hammer, being unworthy amplifies it.

Worthiness does not negate its normal weight.

In Age of Ultron, Thor and Vision have a brief conversation about Mjolnir.

Thor: Well, if there's too much weight, you lose power on the swing.

54
How does Mjolnir determine 'worth'?
54
Can Thor's hammer be wielded by anyone in outer space?
10
Would it be possible for Captain America to catch Mjolnir instead of his shield?
7
Has Galactus ever been depicted attempting to lift Mjolnir?
91
Why isn't Captain America worthy of Mjolnir?
2
How is Thor's hammer imprinted?