What are the Animus death scenes, in-universe?

I'm a big fan of abstract storytelling, so I've always enjoyed the Animus death animations in the Assassin's Creed series, where a major assassination target has a few moments to sum up their life and their dreams before they die. I've only played the Altair and Ezio games, but these scenes are often my favorite moments from the games, and seeing how each character reacts to the thought of dying adds great characterization at the moment their stories end. 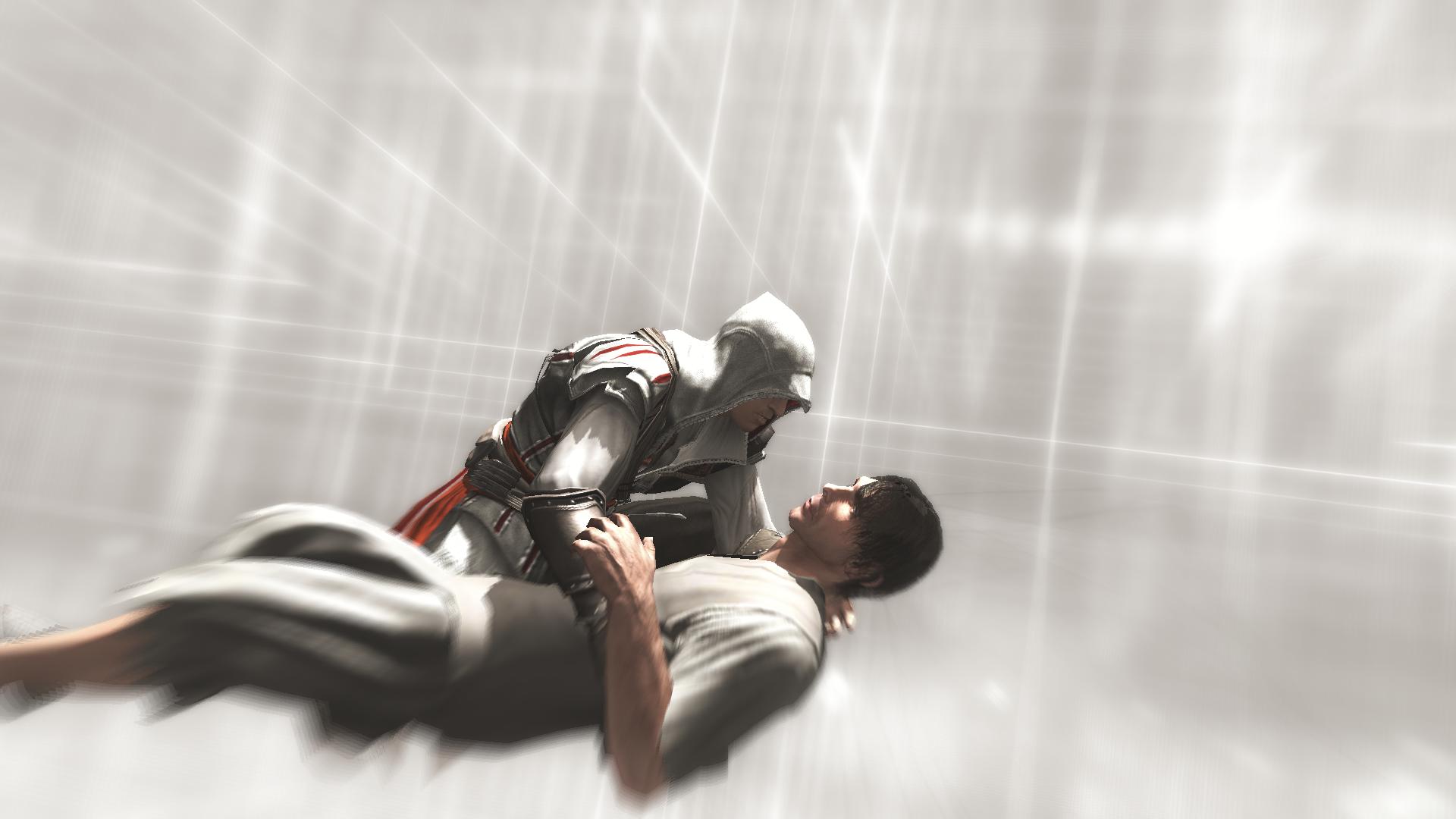 However, in the context of an actual assassination, it makes very little sense. The background disappears and is replaced by the Animus fog, the target is often very open and honest about his thoughts and dealings with the man who just murdered him, and any nearby defenders seem to pause while the assassin and his target trade words. As soon as the final breath is released, the background comes back and the assassin often must run for his life.

Is there an in-universe explanation for these moments? Oftentimes the player will receive important information from the target, implying that the memory actually happened (or else how could the assassin subsequently take action based on the target's dying words?), but if it did actually happen, why is it presented in such an unusual way, and how are we to account for the "privacy" of the exchange in the middle of a frantic battle?

The only explanation I could come up with is that the scene is the Animus's way of giving the user a "data dump" of other information associated with the target at the moment of their death. That is, Desmond is receiving in a few moments the information that Ezio or Altair gathered over a much longer time, presented as a straightforward conversation.

But is this ever confirmed explicitly, or is it explained in some other way?

I don't agree with your "data dump" theory, because of Altair's conversations with Al Mualim in AC1. While being debriefed after a kill, Altair would refer to these conversations as though they had actually happened, treating them like deathbed confessions (Which is lampshaded rather hilariously in AC2). At one point he says to Al Mualim:

Each man I’ve slain has confessed strange words to me. They are without regret. Even in death, they seem confident of their success.

He's obviously referring to these conversations. Another example, after killing the slaver:

[Talal] saw it differently - claimed they were not slaves at all; that he was helping them.

Many of the things Altair learns, and then recounts to Al Mualim, are things he couldn't possibly have learned from anyone but his target; many of them refer to the Templar conspiracy, for instance. The most plot relevant example is from the last assassination mission, when Maria reveals that Robert de Sable has gone to convince King Richard and Saladin to attack Masyaf together.

So it would appear that these confessions are actually happening, in real time.

The only way this would possibly make sense is that Altair (And Ezio) are much, much better Assassins than Desmond (and us), and can actually kill their targets so discreetly that they can have these five minute conversations before a guard notices that something's wrong.

This obviously makes no narrative sense in AC2, when Ezio has the pistol (And one mission practically requires you to use it), but I don't really have a better rationalization.

As to your other points:

The Animus fog: I believe this is a configuration setting of the Animus. Abstergo built it as an information-gathering device, so they likely believed that the moment of a target's death would be a critical time to gather intelligence. The introduction of the Animus fog may be to reduce "bandwidth" to ensure the final moments don't get corrupted. Obviously out-of-universe they exist so that the player is focusing on the critical character development rather than the (Frankly gorgeous, even five years later) scenery. This may be an in-universe explanation too; keep the operator focused on the moment rather than letting their mind wander.

Spilling their guts: This is really only a thing in AC1. In AC2 and Brotherhood the targets die very quickly, with maybe one sentence spiting Ezio before they die and Ezio does his badass "Requiescat in pace" thing. As I mentioned above, the tendency for Altair's targets to tell him all of their secrets is kind of hilariously sent up in AC2 by Vieri de'Pazzi:

Ezio: What are you and your allies planning? Is this what my father discovered? Is this why he was killed?
Vieri: I'm sorry, were you hoping for a confession? [dies]

As for Altair's targets, they mostly fell into two categories:

In the first case, they were trying to convince Altair that he was wrong and they were right. They truly believed in the things they were doing when they were killed, and were exalting themselves in the same way they exalted their God.

In the second case, well, Majd Adin was just nutters, and it seemed important to him that Altair know this.

The main exception to the above is Maria. Her motivation seemed to be just to hurt Altair as much as possible - she clearly didn't think he could do anything to stop Robert's plan, and seemed to tell him what was happening for no reason other than to make him feel like shit for killing all those Templars.

Not the answer you're looking for? Browse other questions tagged plot-device assassins-creed or ask your own question.

8
What happened to Lucy after the end of Assassin's Creed: Brotherhood?
18
What did the Howler to Aunt Petunia mean in Order of the Phoenix?
21
What kind of beings are shown by the Marauder's Map?
14
How exactly does the Animus work?
6
How does the Animus know which ancestor's memories it should reproduce?
9
How independent of each other are the different copies of Smith?
3
How are the assassins from the first three games related to Desmond?
43
What was the point (out of universe) of house-elves?
4
What are Climbing Crescents as used in The Broken Eye