Why did Robb attack Tywin Lannister's Army at the same time as his surprise attack on Jaime?

In Game of Thrones, Robb Stark decides on a two-pronged attack against the two Lannister armies. He sends a small force to move quickly and attack the main Lannister army, led by Lord Tywin, head-on, resulting in massive casualties to that subdivision of the Northern army.

At the same time, he takes most of his Northern army and lures Jaime Lannister away from his siege of Riverrun, capturing him in the battle of Whispering Wood (leading to the subsequent routing of Jaime's army).

If the success of his strategy hinged on capturing Jaime (which he was able to do), then why did he attack Tywin at the same time?

It is not as if Tywin could warn Jaime that he was being attacked by the main Stark-led army (leading Jaime to believe that he was safe from the Northerners), since Jaime could not receive any messenger ravens (as he did not have a fixed point to which they could be sent) - and we do not see Tywin send warning in any event. And in any event, Robb is quite successful in masking his movements from Jaime.

If he just wanted to prevent Tywin from coming swiftly to counter-attack Robb once word got to him about the capture of Jaime, that doesn't make sense either, since:

It seems that the book portrays Robb's decision to split his forces in this way as a key to the success of his victory and capture of Jaime Lanister in Whispering Wood. In so doing, he knowingly sacrificed most of the force sent against Tywin Lannister. But why did he need to do this? He could still have gotten Jaime without attacking Tywin directly, and kept a larger number of his soldiers and bannermen alive or uncaptured in the process? What am I missing?

System Down has sufficiently answered this question.

This is merely to add graphical representation to add more clarity to the situation.

Situation before the crossing

Before Robb made his crossing of the Trident, the situation was following.

At that point, Walder Frey was neutral and had kinship with Casterly Rock due to marriage between Lord Tywin's sister Genna and Lord Walder's son Emmon. Siezing the initiative, Tywin occupied the ruby ford and sat firmly on the Kingsroad to repulse a Stark attempt to cross the river from there and outflank Jaime's host. By occupying that point, he also made sure that if Arryns bestirred, they would have to fight him before they ever get to Riverlands.

Tyrion joined his father at the Crossroads inn when he got free from Eyrie.

Following map will show you exact positions of all hosts: 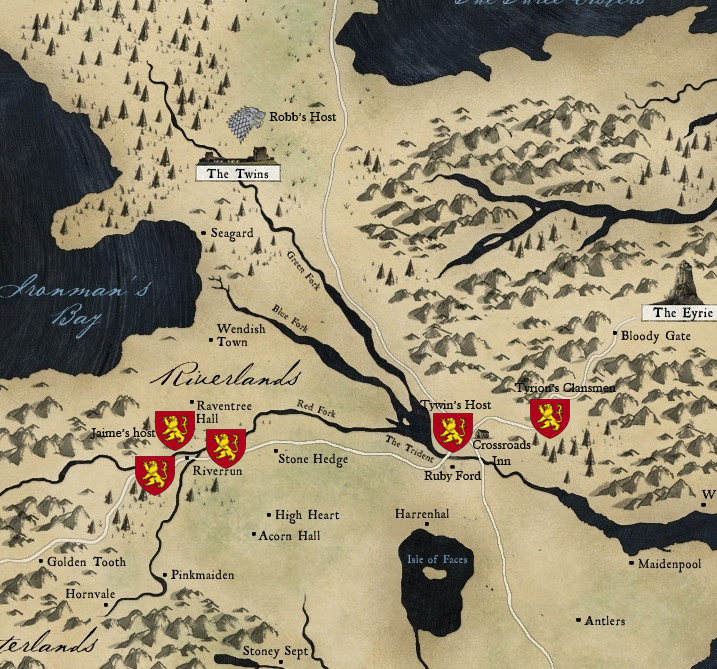 As you can see, If Robb moved against Jaime directly, Tywin would have marched quickly southwards across the ford, then cut Westward until they crossed the red fork and then together Jaime and Tywin could finish Robb. So Robb had to secure his flank and rear from Tywin and also had to relieve Riverrun. Instead of staking everything on one battle, Robb chose to divide his men and tie Tywin in Ruby ford while he could smash Jaime's host freely using mobility of his Cavalry.

Situation After the Crossing

As it turned out, Freys joined Robb. Robb took most of his Cavalry and crossed on Southern Bank of the Twins. He was going to ride fast and hard to Riverrun and take Jaime unaware. He gave command of his foot to Roose Bolton who struck South-East along the Kingsroad to engage Tywin Lannister at Ruby Ford and deny him the chance to aid Jaime.

Tywin failed to know about the split and Ser Addam Marbrand, commander of the Lannister outriders only managed to report about movement of Bolton's troops, which Tywin mistook to be main Stark body under command of Robb Stark. Following was the location of Armies after the crossing: 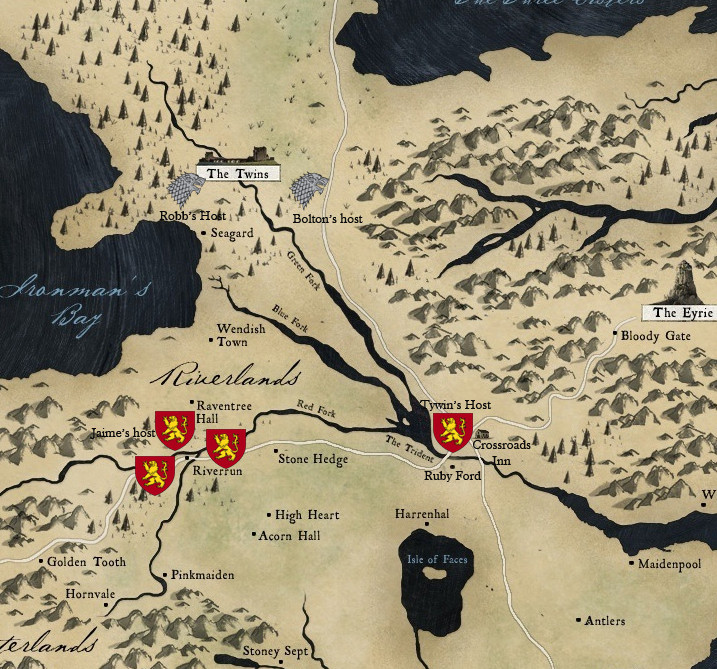 Battles At Greenfork and Whispering Wood

Robb's plan was successful. Bolton distracted Tywin long enough to allow Robb to defeat Jaime in Battle of Whispering Wood. Starks suffered heavy losses at Green Fork however they succeeded in delaying Tywin's aid to Jaime. Tywin failed to give a chase to survivors of Bolton's Army because he wanted to help Jaime in his siege.

Following is the map of Battles: 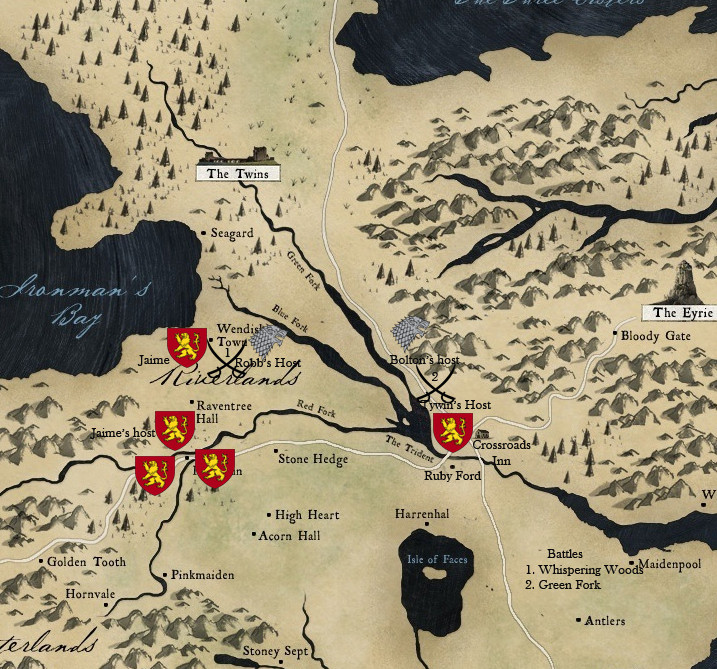 As you can see, Tywin was stuck a long distance away, thinking that he was fighting Robb Stark. He was unaware that Robb had captured Jaime. Robb's simultaneous attacks in East and West had succeeded in achieving their ultimate objectives.

Robb, now unopposed in West, quickly follows up on his victory and launches a surprise attack on Armies besieging Riverrun. In Battle of Camps, Lannister suffered a crushing defeat as leaderless Armies of captive Jaime Lannister were destroyed in their camps amidst a lot of confusion and disarray.

Tywin Lannister soon learns of these developments and retreats to Harrenhal to avoid encirclement by possible allied Baratheon-Stark forces and to be in a defensible position from where he could move to attack Starks or defend KL from a Baratheon attack. Roose Bolton moves to occupy Ruby Fork which was an extremely valuable position from strategic point of view as Possible allied Arryn Forces would have needed it to enter Riverlands and any Lannister adventure(However unlikely given the experience of Tywin and Kevan) northward to threaten Vale or North would have to pass from there.. 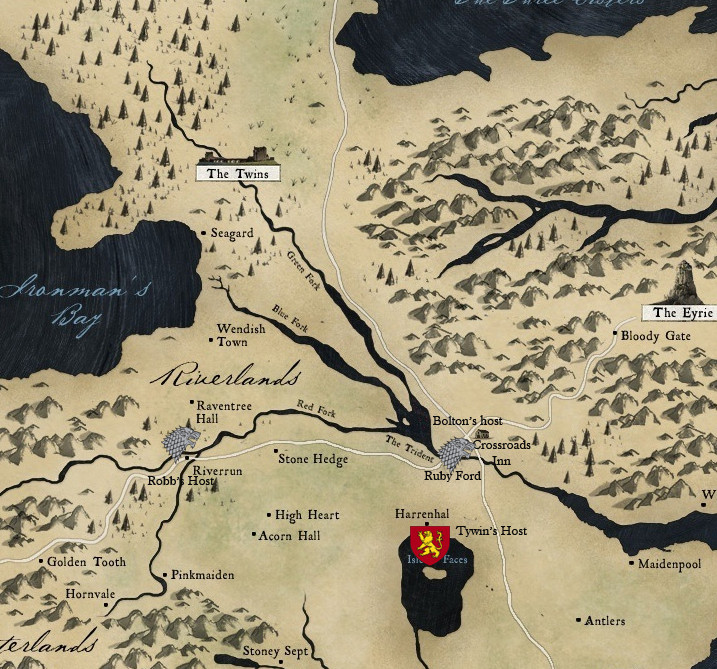 So as evident, due to his simultaneous attack on Tywin Lannister and Jaime Lannister, Robb achieved following results:

If I remember correctly, here is the situation before the "split":

While Robb has to negotiate passage with the Freys in order to cross from east of the river to west, Tywin doesn't have that problem. The latter is more to the south where crossing is easier. And moving a force strong enough to successfully ambush Tywin is not easy to hide from scouts.

Robb knew that if he just attacked Jaime, Tywin's forces would take him in the rear, and Robb had nowhere near the strength to fight that kind of scenario. Thus, he needed to occupy Tywin's army long enough for him to secure Riverrun. So he splits off Roose Bolton's force with the majority of the footmen (keeping the quicker cavalry) and force marches them to attack Tywin. The quickness of Bolton's attack succeeds in diverting Tywin's attention away from Jaime and Robb's army marching towards him.

Once Robb had Riverrun, which was the real objective (capturing Jaime was a bonus), he had a stronger strategic position. He could withstand an attack from a late coming Tywin Lannister much more easily. And Bolton did not lose all of the men under his command in the battle of the Green Fork. Spoiler ahead:

He only sacrificed the forces loyal to Robb, keeping his own levies around him

Bolton had enough men left over to take Harrenhall from the Lannisters, keeping him an effective player in the war.

I think the purpose of the split was to deceive the Lannisters. The part of the army that moved towards Tywin, made Tywin think he was being attacked, so he didn't move positions at all. He decided to take a completely defensive position (he was probably camped in a good spot). This stopped him from moving to help take Riverrun (which I think was his goal, though you only hear about it in theory between Robb and his war councilors). This meant Robb could fight the smaller Jaime army, and hopefully beat it, before Tywin would even know that his son had lost. You are right about the communication, and the Lannisters were so confident, that even though they both probably knew they were being attacked, they trusted the success and support of the other Lannister army (Tywin trusted Jaime to get Riverrun when he was attacked, and Jaime trusted his father to move up behind him). It was just luck that Jaime was captured (well not luck at all, a lot of strategy went into it, but lucky that Jaime is the way he is), and that helped beat that army with fewer casualties.

I think the issue might be that Tywin saw the attack coming and was distracted before the fight - setting camp in a defensible position, scouting local choken points and making other preperations. If he did not see the attack he would have deduced that Robb was aiming to hit Riverrun instead and would have made haste towards him. As it was even if he won the battle and tried getting to Riverrun ASAP it would have taken time to pack everything and organise everyone to move.

Hence the feint was required because it distracted and mislead Tywin before the battle. As we saw by the messenger arriving the distances were crossable if you made haste. Also Jaime was truely caught out and was taken relatively quickly. If he had made a better fight of it and the battle turned in to a siege it would have taken longer, allowing more time for Tywin to reach him to help so it was critical to keep Tywin busy for as long as possible to allow as much time as possible to capture Riverrun.

Not the answer you're looking for? Browse other questions tagged game-of-thrones a-song-of-ice-and-fire warfare geography or ask your own question.

25
Confusing movements of Lannister Armies under Jaime and Tywin?
12
Why did Robb cross the Green Fork at The Twins?
11
Why did Roose Bolton use this tactic?

25
Confusing movements of Lannister Armies under Jaime and Tywin?
14
What happened to Ice, Eddard Stark's Valyrian steel sword?
90
Is there any proof that Jaime Lannister is actually a good swordsman?
10
Why do Hoster and Edmure Tully not rally their forces?
7
Why would Tywin allow Jaime Lannister to fight in dangerous battles
5
Why did Prince Doran not join Renly Baratheon?
12
Does Jaime Lannister have dyslexia in the books?
5
Why did Stannis kill Renly instead of someone else?
8
Why are members of the Kingsguard allowed to fight in battles and tourneys?