It was also mentioned in 1998 Star Wars Visual Dictionary as per Wookieepedia, but I can't find a cite.

The name Cos Dashit was also used in early scripts. While The Phantom Menace is the first time Palpatine's name is spoken on-screen, it was first mentioned in the novelisation of A New Hope, and confirmed in the novelisation of Return of the Jedi. Whether this is Palpatine's first or last name has never been established until The Sequel Trilogy, when his first name (Sheev) was revealed, but a popular fan theory at that time was that Palpatine was 'Cosinga Palpatine, Jr,' due to the mention of his hatred for his father and refusal to use "his name," in the book Darth Plagueis. His father was Cosinga Palpatine, apparently. I've not read that particular book, and Wookieepedia's article on Palpatine is, as you will see if you click on my above link, quite large. Skip to "Behind the Scenes" for the information I've provided. 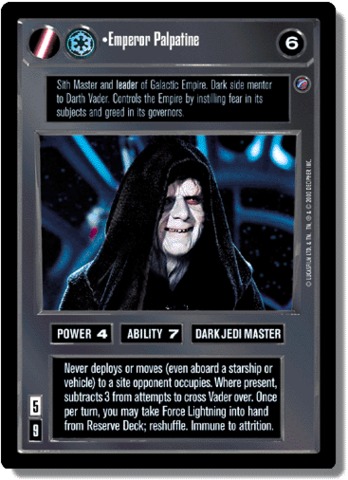 Yes! It was in a small booklet that accompanied one of the X-Wing/TIE fighter games. Up the post Nikie is right. It told the story of the Star Wars characters including Palpatine. I’m so glad someone else (nikie)remembers this. Not only was it told that Palpatine became the Emperor but I believe it also mentioned a very important Star Wars lore point which many have forgotten. In the booklet it mentioned that Emperor Palpatine foresaw his own death and that it was Anakin Skywalker who would kill him. That’s why he tried so hard to change Anakin to the Dark Side, in an attempt to escape his destiny. When he found out of Anakin Skywalker’s son Luke, he thought Luke Skywalker might be the one who kills him. That’s why in ESB and ROTJ he spends all his resources (like having his fleet go through an asteroid field in ESB) to find Luke and turn him to the Dark Side. I hope someone else remembers this cause apparently Lucas took this out of Star Wars lore.

64
Is Palpatine's identity a spoiler?
60
How do we know they were called 'Ewoks'?
38
Was the Emperor always a Sith Lord?
1
Did Palpatine foresee that Anakin would kill him?

43
Has anyone ever heard of a crazy interpretation of the original trilogy where Obi-Wan is really OB1 and a clone?
18
Did George Lucas use any of the expanded universe material in the prequel trilogy?
28
How does Yoda know that the name of other Sith is Darth Sidious?
27
Why did Jedi in the prequel movies use the Force offensively?
20
If Darth Vader discovered Luke was his son from the Emperor in the 2004 retconned version of “The Empire Strikes Back”, then how did the Emperor know?
19
Did the Rebellion know that the Emperor was the Sith Lord Darth Sidious?
28
When did Emperor Palpatine first reveal the post-Mustafar Darth Vader?
8
When did the name "Sidious" first appear?
8
Why did Darth Sidious wear a cloak?
4
Who designed the Emperor's chair from "Return of the Jedi"?