What was special about Batroc?

In Captain America: The Winter Soldier, Steve Rogers is confronted by an Algerian pirate known as Batroc, who manages to go toe to toe with him in a fight.

There aren't many people who can do this, and most of them are "super-men" or have some other edge. Brock Rumlow tried in the lift and and was beaten up fairly efficiently!

Is there anything special about Batroc which explains his exceptional combat ability?

No, there is nothing "special" about Batroc the Leaper. He is an exceptional savate fighter (savateur) and former member of the French Foreign Legion who became a mercenary. This makes him a total badarse, but he is just a man, albeit an exceptional one.

Batroc the Leaper has no superhuman abilities, but is in peak physical condition in every respect. He is an Olympic-level weightlifter and has extraordinary agility and reflexes. His leg muscles are particularly well developed enabling him to leap great distances equal to an Olympic athlete. He is an expert hand-to-hand combatant and specializes in savate (French-style kickboxing). He is also a skilled military tactician, having formerly been in the French Foreign Legion.

Batroc is also an experienced thief and smuggler, and can speak both French and English. Although, as a mercenary, he does not hesitate to perform any number of criminal acts for his clients, Batroc has a strong sense of honor; he will turn against any client whom he feels has unfairly deceived him into committing crimes to which he might not otherwise have agreed.

I must add, however, that the Batroc in The Winter Soldier and the Batroc in the comics do have some differences. For one thing, in the film he is described as Algerian, but in the comics he really is a Frenchman, from Marseilles. There may be other differences as well. Regardless, he is one of a very small number of regular humans that can go toe-to-toe with Captain America; he's considerably better in hand-to-hand combat than Rumlow.

While we know little about Batroc in the Marvel Cinematic Universe, Earth-199999, he is reportedly a fierce and capable mercenary and an expert in the French martial art, Savate.

From the Marvel Cinematic Wiki:

In the Canon Marvel Universe, Earth-616

Batroc is more colorfully known as Batroc the Leaper.

Created by writer Stan Lee and artist Jack Kirby, the character first appeared in Tales of Suspense #75, 1966. He is a mercenary and a master of the French form of kick boxing known as savate. Writer Mark Waid described the character as ahead of his time, elaborating "He was a Jean-Claude Van Damme, but he was in the 1960s." 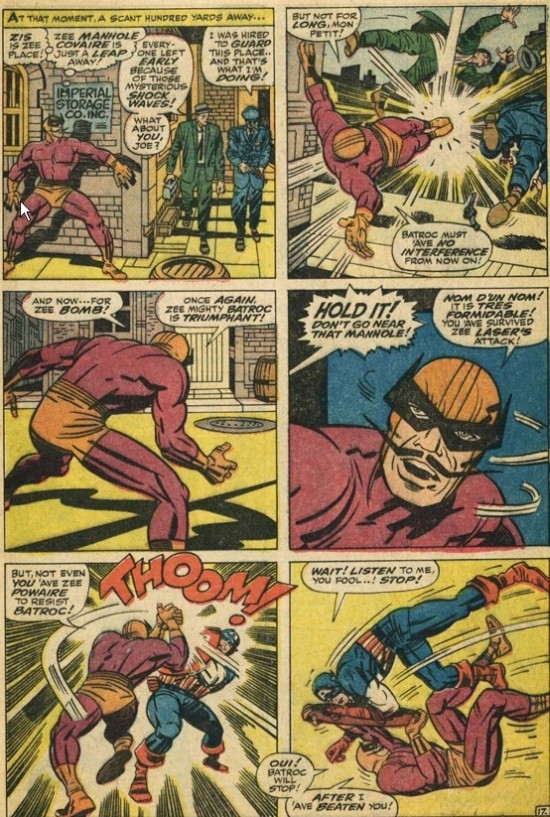 You mentioned the between Rumlow and Cap on the elevator. I think a major difference between this fight and the fight against Batroc is the confinement of space worked in Cap's favor. The Hydra agents were limited in what they could do and how they could move, and even how many of them could actually reach and hurt Cap; whereas every time Cap moved he connected with something. Giving Cap's strength and skill, even at partial mobility he was doing serious damage with every hit.

In his fight against Batroc, Batroc was able to fight to the full extent of his abilities. In Civil War Rumlow was able to put up more of a fight, though it still paled in comparison to the Batroc fight, but Batroc is a former soldier and a master of his fighting style so that stands to reason. 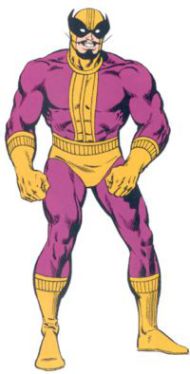 Batroc the Leaper -- Batroc in the Marvel Comics Universe is a French criminal with amazing physical abilities in gymnastics and martial arts. He is a master of Savate (French kickboxing), but possesses no super-powers. Batroc has a unique sense of honor, and longs for the day when he can defeat Captain America (whom he admires in a weird sort of way), in a fair fight. In the Marvel Comics Universe, Batroc has joined with other villains in loose alliances usually referred to as Batroc's Brigade. In the Marvel Universe, Batroc is a former soldier in the French Foreign Legion and a martial artist who hires himself out to the highest bidder, including, (in his first comics appearance), HYDRA. Despite being a master criminal, Batroc has turned on his employers and other allies if he perceives them to be dishonorable. This occurred in his first encounter against Captain America, where Batroc disapproved of the tactics used by HYDRA, and actually aided Captain America in his battle against the terrorist organization. Batroc is a character conceived by Stan Lee and Jack Kirby in the Marvel Silver Age. In the 2014 Marvel Studios film, Batroc is played by Georges St. Pierre, a Ultimate Fighting Championship fighter who battles Captain America in the opening scenes.

22
Why are some S.H.I.E.L.D. agents referred to by codenames or numbers?
13
What was Captain America's running path?
10
What did Black Widow mean about the rock in the Potomac?
28
Is there anything special about the words used to activate the Winter Soldier?
8
Are Hawkeye's glasses special?
6
What makes Dr. Stephen Strange special?
15
What makes Earth special in the MCU?
2
Why does Batroc want revenge on Falcon?