What happened to Jeremy Aster?

So in the TNG Season 3 episode "The Bonding", Worf and Jeremy Aster perform the R'uustai, a ritual that binds them together as brothers, effectively joining Jeremy Aster to the House of Mogh.

What happened to Jeremy Aster after that? Are there any books or follow-up stories about this character?

Per the Memory Beta article on Jeremy Aster;

As an adult, Aster pursued a career in archaeology, and by 2375 was working toward his doctorate at the Rector Institute. That year, he was also involved in a romantic relationship with a woman called Marra. By the end of that year, however, their relationship had ended. (TNG novel: Diplomatic Implausibility)

Jeremy would later assist Worf and Alexander Rozhenko in the Genesis Sector, helping to keep the Moss Creatures from unleashing a new Genesis Wave on the galaxy. During this time, Jeremy joined the House of Martok. (TNG novel: Genesis Force)

He also appeared briefly in the DC Comic "The Lesson" 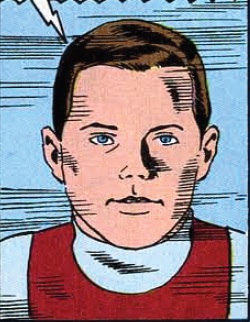 Not the answer you're looking for? Browse other questions tagged star-trek star-trek-tng klingon worf or ask your own question.

7
Was Ishara actually Tasha Yar's sister?
47
Does Picard ever agree with Worf that the best course of action is to fire torpedos?
17
Why is Worf always called by one name?
10
Star Trek: TNG novel identification assistance - plot uses Darmok-like communication
13
Morally/Legally, how could Dr. Bashir, a Federation doctor, perform the operation he did to Worf's brother Kurn by wiping his memory?
3
Did any Nanites ever show up in any Star Trek stories after Evolution?
1
What causes Worf and Data to act strangely?
7
TNG “The neutral zone”, what happened to the rescued humans?