Was the time dilation caused by Miller's planet or the close proximity to the Gargantua black hole?

In the movie Interstellar, is the time dilation the team suffers on the water planet Miller caused by the proximity of the planet to Gargantua or by the planet's gravitational pull?

The planet was within the gravitional forces of the black hole. The planet itself only had 30% more gravity than Earth. So the black hole caused the extreme time dilation they suffered while traveling there and on the surface.

During the movie there was an image, which isn't available yet, but it was essentially: 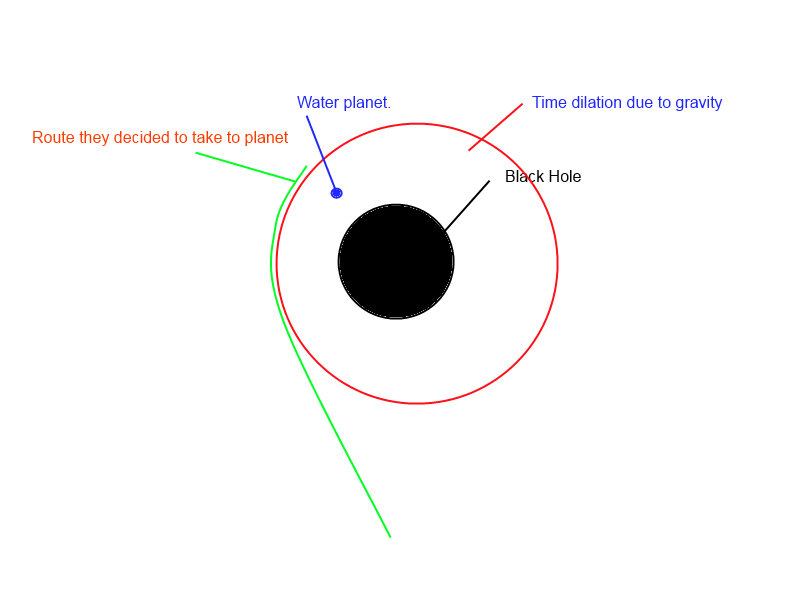 This image is not to scale. The closer you get to the black hole, the worst the dilation becomes, that is why later in the film

as they slingshot around the blackhole, the time dilation has been 51 years, because they are closer to it.

It's neither, it's a scientific error. No planet could have strong enough gravity to cause time dilation of that magnitude, as the linked article says, and no planet could survive if it was close enough to a black hole to produce that time dilation -- it would be torn apart by tidal forces.

The 61,000 time dilation factor on Milner's planet is not due to relative velocity time dilation, but gravitational time dilation. Additionally, it is not due to the gravity on the planet itself, but the massive gravitational well of Gargantua (the supermassive spinning black hole). The gravity affecting Cooper on Milner's planet (from the 100 million times more mass black hole) is orders of magnitude greater than the gravity affecting Murph on Earth. Thus, time is significantly slower for those on the edge of Gargantua and time passes more rapidly for those on Earth.

Unfortunately - if as hypothesised by an earlier contribution the planet is in free fall in a deep gravitational well and so out space adventurers feel no gravity, by the principle of equivalence they are not experiencing any gravity. Hence there is no relative time dilation due to gravity at that surface. As they leave the planet they will have to accelerate sufficiently to not only leave the free falling planet but escape the huge gravitational field experienced in the deep well. That will give time dilation, and if 61,000 times, then crush them into a rather unsightly possibly pink slime.

The time dilation in this movie was horribly inaccurate in accordance with the any of the laws of physics. Time dilation become noticeable when reaching relativistic velocities (achieving well into the double digits percentage of light speed). To the outside observer the time will slow down for the person in question when their velocity (speed) becomes high enough. Gravity does cause time dilation because gravity is a force that applies velocity (speed) on every object with mass (and sometimes objects without mass).

Now to the movie. The water planet was stated to have a 1 hour to 7 years time dilation. That means people on the planet time will appear to pass 59808 times slower (while on the planet everything else will appear to pass 59808 times faster). Well after some math this time dilation apparently only happens at velocities of 186282.3 miles per second (299792.4 KPS) or also known as 99.99999998602179% the speed of light. That is ridiculous.

In the movie they used standard chemical rockets as their mode of acceleration. Some how they achieved orbit of the water planet orbiting the black hole at over 99% the speed of light. How they did this is beyond me as the fastest thing ever made by man hasn't even come close to 1% the speed of light. This movie's math not only is wrong, it is so glaringly wrong I had to stop the movie and crunch the numbers because what they tried to cram down the audiences' throat is so obtuse and shouldn't be tolerated by anyone trying to claim this movies legitimacy.

I don't have an answer but 1,000 questions instead. I'm not a math guy but am usually pretty quick to grasp concepts. If someone wouldn't mind helping me out with the conundrum of Gargantua v Miller's planet, I'd be very grateful.

At the heart of my questions is the concept of gravitational time dilation. If I understand correctly, when gravity is X, then time dilation is Y. In other words, the ratio is constant. (I know, this is dramatic oversimplification but bear with me.) So, on Miller's planet, which is being affected by the blackhole's gravitational field, 1 hour = ~7 Earth years given the Earth's point of reference related to Miller's planet. However, on board the Endurance, which is also presumably being affected by Gargantua's gravity but to a slightly lesser degree Than Miller's planet, one would expect the degree of time dilation to be less than what is experienced on Earth. Correct?

However, in my example above, X is really measured as X meters per second squared (m/s2), right? Essentially, the measurement is based on the excelleration of the body caught within the gravitational field. Essentually we are measuring the different rates of excelleration between the Ranger's passengers and the Endurance's.

All of that said, I cannot believe the passenger on Endurance waited 22 relative years for the occupants of the Ranger to return 3 hrs after leaving to Miller's planet. I haven't done any math, but aren't we talking about ~1 minute here, at most, if in fact the Endurance was orbiting Miller's planet?

If I am correct above, let's look at Earth in the same context. In Earth's case, the calculations become much more complex. You have to account for the difference between the Earth's speed vs Miller's planet, the chance in speed differentials as the planets revolve around there gravitational governing body. (For example, when the Earth is orbiting away from Miller's planet, the difference between the two bodies' relative speeds increases, right?) Further, the angle at which Earth observes Miller's planet changes the relative perception of Miller's planet's movement. Then you have to account for the speed at which the Galaxy in which Miller's planet exists is racing away from the Earth as well as the many variables associated with this movement.

In short, the time dilation associated with the relativistic movements between Earth and Miller's planet likely needs a super computer to calculate, I think.

Even then, the gravitational time dilation caused by Gargantua is likely a small contributing factor when calculating the actual relative time dilation between Earth and Miller's planet.

And if I'm on the right track, I don't even want to think about what happens when Cooper shows up on Dr B's planet, although I might travel a great distance to start a population with Anne Hathaway.

Not the answer you're looking for? Browse other questions tagged space-exploration time-dilation interstellar or ask your own question.

24
Why will data from a black hole solve the gravity problem?
7
How fast is Miller's planet orbiting Gargantua in the movie Interstellar?
40
Interstellar: non-breaking waves on Miller
8
Why did Brand give Mann vital info. about Plan A?
9
Why bother with the planet at the event horizon?