At the end of the film version of Harry Potter and the Chamber of Secrets, Harry tricks Lucius Malfoy into giving Dobby a sock. Since this means that his household servant is no longer under his control, this understandably causes Lucius some annoyance. He pulls out his wand and begins to incant a spell

before Dobby steps in and zaps him.

Avada Kedavra is known as the 'killing curse'. Using it supposedly results in your immediate transfer to Azkaban for a life sentence.

Was Lucius seriously about to kill a twelve year old child with an unforgivable curse, directly outside the Headmaster's office, with witnesses around? 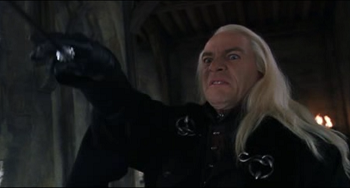 This is definitely out-of-character for Lucius Malfoy.
He has on numerous occasions shown to be:

He is also an extremely (if not the most) important Death Eater still alive / at large. So he would not go so far as to expose himself with such a controversial act.

That being said, there is definitely no mention or evidence of "Avada..." leading to anything other than "...Kedavra"; so it is fair to assume that he was going to use the Killing Curse in the movie.

It is important to mention here as well that (as the OP pointed out) this is only in the film version; in the books he merely "lunges" at Harry:

Lucius Malfoy stood frozen, staring at the elf. Then he lunged at Harry.
“You’ve lost me my servant, boy!”
But Dobby shouted, “You shall not harm Harry Potter!”
There was a loud bang, and Mr. Malfoy was thrown backward.
Harry Potter and the Chamber of Secrets, Chapter Eighteen, "Dobby's Reward"

So why the discrepancy?

Out-of-Universe
Personally I feel that it was the writers' and the actor's way of adding effect to Lucius wielding his wand and dramatising the whole affair. He is extremely upset at both his diary ploy being foiled as well as losing his family's servant.

In-Universe
Lucius has a cunning attitude as well as a strong influence both in the Ministry and with the Hogwarts Governance Board; he likely could have tried to murder Harry and then:

Both are viable and fit in with his character, as well as his high influence and control over members of the Ministry or the Wizengamot.

According to Harry Potter: The Wand Collection (your canon mileage may vary) Lucius did intend to kill Harry using Avada Kedavra prior to Dobby stopping the act...

Lucius is a known practitioner of the Dark Arts with his wand, including Unforgivable Curses. He attempted to perform the Killing Curse on Harry in Harry Potter and the Chamber of Secrets, but his once-enslaved house-elf Dobby interfered and repelled him.

Avada need not lead to Kedavra as Richard points out in the comments. J drew it from some ancient Aramaic mystic medicinal curse. The goal being to kill that which kills you.

Even if you're more into the similarity with abracadabra you'd know that it's not the only abra. It will create pain rather than death being the first that comes to mind.

Indeed without question Dobby had heard the crazed wizard use it to harm people previously but he didn't respond with much more than a single magical swift kick to the groin.

I'm flabbergasted that there weren't more fans who support the FACT that Malfoy wasn't about to utter an Unforgivable Curse but that he was saying "Vera... " as substantiated by the Closed Captioning on both DVD and Netflix and HBO.

Seemingly all the other subtitles were correct so why so many people feed off a barely audible half muttered curse is preposterous to me. Am I missing something?

Obviously I have had this conversation come up within my own household, otherwise I wouldn't be here, but clearly the text say LM said, "Vera... " before being foiled by the house elf.

Is it simply everyone's need to so call stereotype Malfoy as this incredibly evil and colossally idiotic character that we hear an incantation not previously uttered and not mentioned until two installments later in GoF?

I don't think either Chris Columbus or JK Rowling would treat the single most deadly and important curse Avada Kedavra as a half spewn partially recognizable, and widely debatable flaw at the end of the movie and be done with it. Mrs. Rowling maintained creative input for all the HP films and her book fans were and are still her highest priority. Such an addition would've been blasphemous to the so called "canon" that are the books.

So by logical deducement I have to say Malfoy was incanting another spell, more likely in the Transfiguration genre than the Unforgivable kind.

I watched the movie both on TV with subtitles and DVD with subtitles. In both, the spell on screen says 'vera' and is interrupted by Dobby. I don't know if there's a canonical spell starting with that but every time I watch it, the subtitles say that. I personally don't think he'd attempt to kill Harry especially outside of Dumbledore's office and when they can check what his last spell was. Not to mention it could only be Voldemort who could kill Harry with the killing curse as he was a horcrux and the spell would bounce off Harry if done by anyone else; like when in Deathly Hallows part two Ron is suspected of using the killing curse on Nagini before Neville kills the snake and Nagini was unaffected by it.

I think that Malfoy temporarily lost his temper and was going to kill Harry, but only because of bad writing. That's the only thing that can explain the differences from book and movie. Otherwise I can't believe that the cool, calm, collected, powerful Lucius Malfoy would actually kill a twelve-year-old right outside of Dumbledore's office with witnesses.