Would Amy and Rory be Cybermen?

If Missy made all dead people Cybermen, does that mean people like Amy, Rory, and even Harriet Jones would be Cybermen?

Assuming that they were dead by this point in time, then yes they would be Cybermen. We know that they die prior to 2012, and if we assume that Clara/12 are in 2014 Earth (I was unable to find anything that explicitly stated this), then we know that their bodies are in New York and their "souls" are in the Nethersphere. As such, they would have come back just like everyone else.

However, Harriet Jones is a bit more unclear (still assuming in 2014). She was killed in The Stolen Earth (about 1:30):

However, we do not see what happens to her body. Even if she was not vaporized, it was possible that she was later cremated. Ultimately, there is no way to know.

I don't think the clouds had yet rained enough "cyber-pollen" to convert all dead bodies to cybermen. On board the UNIT plane, they did say that every place with lots of dead bodies had been rained on, here's the line from the transcript:

NEWS REPORT: Localised rain in the cemeteries has resulted in what can only be described as disturbances to the soil. Extraordinary eyewitness accounts are claiming that silver creatures are climbing from the graves.

KATE: These scenes are being repeated everywhere. Every cemetery, every mortuary, every funeral home, every hospital, the dead are returning to life as Cybermen.

But later Kate showed a computer graphic of what their sensors had detected underneath a graveyard, showing a large number of coffins but only a small fraction of them glowing with cybermen bodies inside: 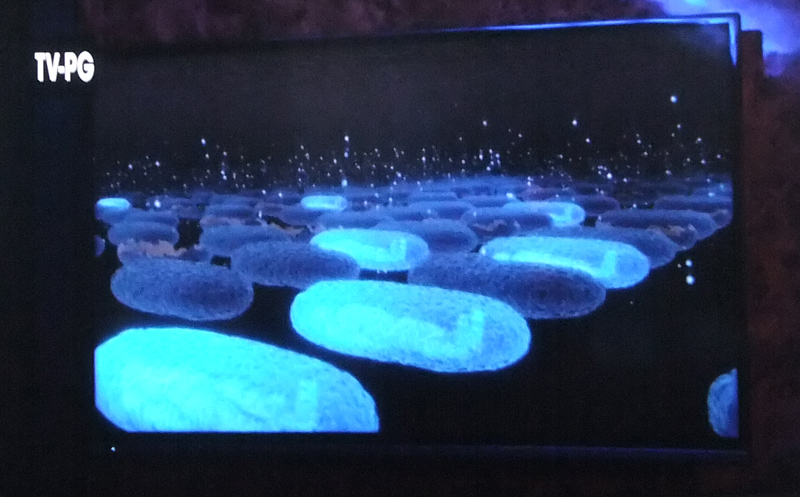 And while the image was being displayed, Kate said:

KATE: We've done heat scans of some of the cemeteries and, in each case only a handful of Cybermen have so far emerged. But every individual burial site is active.

AHMED: So the rain caused all that in just a few hours?

DOCTOR: It wasn't rain, Man Scout. It was pollen. Cyber-pollen. Every tiny particle of a Cyberman contains the plans to make another Cyberman. All it has to do is to make a contact with compatible living organic matter and bang! Full conversion. But if they have learned how to convert the dead.

Perhaps the existing clouds, which had been apparently been created by only ninety-one cybermen flying into the air and "pollinating", didn't contain enough cyber-pollen to convert more than a small fraction of the dead, but the newly-created cybermen would be able to add to the pollen in the clouds. Or perhaps the the pollen was self-replicating within the clouds themselves. Either way, the characters spoke of a second rain from the clouds as a future threat which needed to be averted. For example, after cyber-Danny deleted his emotions so that he'd be able to gain access to the cyberman hive-mind, there were these lines:

DOCTOR: Clara, no! Step away! He's activating! Clara, step away now! Don't. Danny. Danny, if you can hear me, if you're still there, what are the clouds going to do?

CYBER-DANNY: The rain will fall again. All humanity will die.

DOCTOR: And rise again as Cybermen.

And later Missy suggests that the Doctor needs to take control of the existing cyberman because that will allow him to stop the clouds from a second rain which would result in the death of humanity:

MISSY: You will, because you don't have a choice. There's only way you can stop these clouds from opening up and killing all your little pets down here. Conquer the universe, Mister President. Show a bad girl how it's done.

And then cyber-Danny indicates his plan is to stop the clouds from raining their cyber-pollen by burning the clouds:

CYBER-DANNY: The rain will not fall. (He lets go of Clara and puts on the control bracelet as he walks towards Missy.)

CYBER-DANNY: The clouds will burn.

MISSY: And who'll burn them?

CYBER-DANNY: I will burn them.

Then he took control of all the existing cybermen (using the bracelet) and commanded them to fly up into the clouds and explode, which burned them off. If the clouds had already delivered enough cyber-pollen to convert all dead bodies to cybermen, I don't see what the point of this would have been, he could have just ordered all the cybermen to deactivate or self-destruct without bothering with the clouds, which would have already done their dirty work.

So, I think all this indicates that most of the dead had not yet been converted to cybermen, and they needed to destroy the clouds to prevent this from happening. Thus, the chances are that most characters that would have been dead at the time of the episode, like Amy and Rory, were not cybermen (their minds probably would have been in the nethersphere, since the Doctor said "she's been upgrading dying minds to a hard drive for a long time" and indicated that with Missy's time travel capability she may have been doing this throughout humanity's entire history; but at the end of the episode Danny contacted Clara from the nethersphere and said "This place is dying now", indicating that it was on the verge of shutting down).

Edited to add: I suppose it's also possible the second rain was going to kill humanity in some way distinct from just creating more cybermen to cyber-convert them--maybe the second rain was going to fill the atmophere with poison, for example. But given the computer graphic showing that most of the bodies in graves had not yet turned to cybermen, and also given my assumption that Danny's orders succeeded in destroying the cyberman threat, meaning there aren't going to be more cybermen rising that didn't respond to Danny's self-destruct order because they weren't yet fully formed (it's probably safe to say the next season won't open with lots more cybermen emerging from graves), I think one of the following has to be true:

A) Danny's destruction of the clouds would prevent any further cybermen from rising, meaning the second rain must have had something to do with allowing more cybermen to rise, even if it could have had additional deadly effects on living humans.

B) Between the scene on the UNIT plane and the Danny's destruction of the clouds, all the remaining bodies with enough organic material to be converted to cyberman had been fully converted, and had "hatched", so that when Danny gave the order they all flew up and were destroyed. If this were the case, then other buried people like Amy and Rory probably would have risen as cybermen.

I think A) is a lot more likely the intent though, just because of the timing. It seems like the scenes are edited in such a way as to suggest there's not much time between the Doctor's conversation with Kate about what's happening in graveyards and Missy breaking free and causing the Doctor and the TARDIS to fall out of the plane, and after he catches up with the TARDIS in mid-air he immediately materializes in the graveyard and has the dialogue with Danny, and then Missy, and then Danny blows up all the cybermen. Not a lot of time for all the non-glowing coffins in the UNIT graphic to grow cyber-exoskeletons and claw their way up out of the ground.

It depends on whether Amy and Rory's bodies are still intact during the events of Dark Water/Death in Heaven.

12
Did the Pandorica rebooting the Universe do weird things to Rory?
0
Why there is a tombstone for Rory in the cemetery of Queens 2012?
10
How do Amy and Rory know who River is in "The Wedding of River Song"?
7
How did Amy and Rory not bring the Chen7 onto the TARDIS?
13
Why weren't people afraid of the Cybermen in "Death in Heaven"?