The only part I clearly remember is a man and girl being bricked up alive (in a tower?) and escaping by turning his (magically large) coat or cloak into a rudimentary hang glider.

The film had a medieval sword/sorcery setting.

I've found the film I was looking for. It was a Russian film called The Story of the Voyages made in 1983. 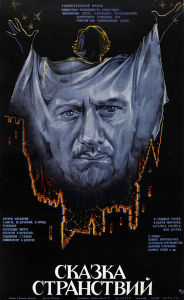 In a medieval fantasy kingdom, two orphans, May and his sister Martha, live in poverty. A group of robbers kidnap May to use his magic talent: he feels sick when surrounded by gold, therefore he can feel gold from a long distance.

Martha goes on a quest to find her brother. She is soon joined by a travelling scientist, Orlando. Together, the two wander through various fantastic countries. They visit a city built on the back of a dragon, and see it burnt down when the dragon wakes. In another city, they are sentenced to death for starting a bar brawl. They manage to escape from prison using hang-glider Orlando invented. Finally they land in a country hit by Black Death, which is personified as a witch in black. Orlando sacrifices himself to stop the plague.

10
Dystopian film involving a child assassin and floating city
7
Film or book trilogy about sentient weapons
5
Man with saucer shaped machine that may or may not been a time travel machine
9
Mad Max-type Sci-fi movie from the mid-80's with fat blob men
6
1990s (?) Animated sci-fi cartoon. Search for Indiana Jones lookalike
14
Futuristic book (series) with big cities, illegals, and “Talented”
20
Early 2000s movie about time travel, protagonist travels back to save girlfriend, then into multiple points in future
8
Vampire film about a college guy turning into a vampire
11
Book about a live reality tv show where money depends on viewers but they were really harvesting dreams