In Justice League #1, why does Barry Allen act surprised when he learns of Batman's existence?

I've been absolutely confused since the beginning of the New 52 and I have recently had it explained to me that Barry Allen actually does remember everything that occurred in his life before Flashpoint and during Flashpoint. Batman is actually one of the first people Barry visits after fixing the timeline and merging the 3 universes. So, my question is, in Justice League #1, it's 5 years after Flashpoint, why, when Darkseid first attacked and basically formed the Justice League, is Barry shocked when Hal Jordan shows up with Batman, asking "You mean he's real?!" or something along those lines?

Where the Flash and the rebooted DC Universe are concerned, continuity errors abound since Flashpoint.

I write off this mistake as a continuity error because there were so many in the early rebooted universe. Take this one from Justice League #2 (2012). 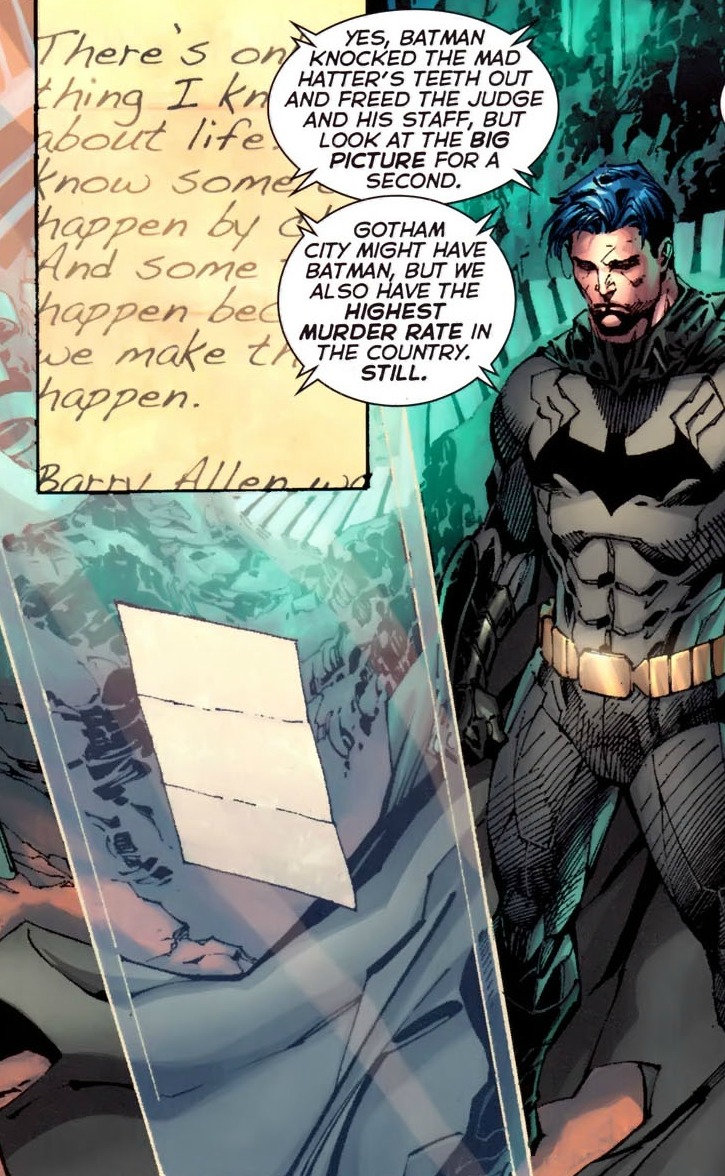 We know Batman and Flash have met at least once before because there is Thomas Wayne's letter in the Batcave. So we are to assume either Barry's memories have faded from Flashpoint or they were pretending they didn't know each other. (We know it's probably just a continuity error...)

I assumed that when Barry went back it was to the same year as Flashpoint, which reset the universe from that point onward, which necessarily changed the preceding events. In the new universe, when that version of the Flash met Batman, it was in the past and that version had not yet merged with the version who lived through the Flashpoint event. Barry was not a new hero when Flashpoint happened, so it was likely after the 5 year reset rule and after the JLA formed, or he would not have known who to look for. So even though Flash returned with memories intact, the new 52 Flash before whatever year it happened in would not have all those memories, but when he reached the year it all happened and "merged" with the self that experienced it, he had all the memories of the Flashpoint reality and the "New Earth" reality (though he would not have much to recall, having been dead for most of it). I would assume, based on how this has been treated, he also has the memories of pre-Crisis on Infinite Earths, but who knows? With yet ANOTHER reboot in the offing, it may all be moot, unless Flash is somehow involved in it as he was with Crisis on Infinite Earths and Flashpoint.

I think (or like to think) that while Justice League War is after JLFP it is actually SET beforehand which explains why neither remember each other. I'm assuming in this case that JLFP is set sometime between Justice League War and Suicide Squad Hell To Pay. This would explain how Arthur is apart of the league in JLFP but not until JLTOA in the other films.

It is also possible that Flashpoint is set even further after these events (even past Reign of The Superman). Though it is not a good source, on the DC Animated Movies Wiki page for Barry Allen (https://dcanimatedmovieuniverse.wikia.com/wiki/Barry_Allen#Abilities) it has the events of flashpoint after the events of the other films.

The different Flash suits make more sense with this theory (as he may have not made the New 52 Styled suit yet). Batman's suit is seen to have a blue colour to it in Flashpoint Paradox. In Batman: Bad Blood, his suit gets lighter and gains the blue colour, which could be more evidence.

This doesn't prove my theory bt can help.

Also, I am a little confused at how the Teen Titans formed before the Justice League. If we assume that the year each film is released (excluding Flashpoint) then Teen Titans formed in 2012 (5 years before 2017), which is 2 years before JLW. This means that Wally West/Kid Flash was working alongside Robin (in an organised official team) 2 years before Justice League War. This also makes us question how The Flash thought Batman was a myth when his protege was working alongside Batman's protege.

I have 3 ways of explaining this. First, and once again, I believe/like to believe JLW is set in 2012 (when the comic book was released) or that TTJC is not set in 2017. However, an issue is caused as due to the short film Nightwing and Robin, Dick Grayson is Nightwing during the events of TOA, which either makes the theory false or means there is a much larger time gap between JL War and JL TOA.

SECOND: Wally West is not the official sidekick of The Flash but a fan.

Not the answer you're looking for? Browse other questions tagged dc the-new-52 justice-league or ask your own question.

6
Does Barry Allen remember his life in the prime DC Universe?