I have vague memories of reading this in the 90s. It was a paperback, possibly an R.L. Stine book (it seems like the right sort of plot and I have this vague memory of it being similar cover art). The main character is a girl who's pregnant. She and her boyfriend go to an abortion clinic (a legal one, not back-alley). That's where things get a little jumbled in my head. I remember the girl bleeding out on the operation chair due to a botched procedure. I also remember her and her boyfriend being stalked by a girl of the same age including a part where the protagonist gets stabbed through the stomach with a pitchfork. I want to say that the sequence of events was that they got stalked by the girl, she got stabbed, and the scene then cut to her bleeding out on the chair with the implication being that it was either just a dying dream, or that the girl who killed her was the unborn baby trying to get revenge.

The reason I see it as either sci-fi or fantasy was that the scene played out like a nightmare where no matter where they turned, their pursuer was behind them with the scenery changing malevolently against them. I want to say that they died a few times during the story, each time with them waking up from a seeming nightmare only to get killed again in a different way.

Pepper and Roxanne meet, flirt, and date. On their first date they go to a horror movie: The Season of Passage, about the second mission to Mars.... After more dates, they go to Paul's aunt and uncle's horse barn to, um, be alone on the hay bales. You know what I mean.

Pulling a Jamie Lynn Spears, teenage Rox is knocked up. She tells the doctor she's not interested in an abortion, but when she tells Pepper the news, he says he doesn't want to keep it.

Soon the couple find themselves on a weekend trip to nearby Foster, AZ. Five hundred dollars later, Pepper waits in the clinic waiting room, while Roxanne waits on the operating table. She thinks about a classmate, Betty Sue McCormick, who committed suicide recently....

Roxanne thinks about how Betty Sue's death was such a waste, then questions her own beliefs about the sanctity of life. She decides not to go through with the procedure, dresses, and leaves before the doctor returns.

Betty Sue explains: "I was the one in your womb. I came back for you. You were pregnant with me." B.S. had come back to kill Roxanne, but first Rox needed to have that abortion. Rox tells her that, uh, she didn't actually have it, so... fallacy?

B.S. was in love with Pepper. She'd come around that night and seen Rox and Pep rolling in the hay. And it huurrrttttt!! She'd made Roxanne feel the same pain by making her push Pepper onto the pitchfork and killing him.

Rox argues that this is all bullshit, because she didn't go through with it, but Betty Sue has some new information. Rox is still on the table. She's bleeding and the doctor doesn't think she'll make it. Rox has been writing through all this, and now Betty Sue reminds her to keep writing or else she's gonna stab her in the abdomen. Rox stops and Betty Sue stabs her with a needle, straight through the gut.

Epilogue time! Pepper's in the waiting room. He can't believe what a tool he is! Getting two girls pregnant in two months. There's a mistake for ya. Well, at least Betty Sue killed herself, and now Roxanne is aborting. All will be well, again.

There's a clamour in the operating room. Roxanne is dying on the table. Pepper freaks out and starts crying.

Laying there, Rox had a sensation of dreaming away. She left her body and walked away. Out past crying Pepper, and into the light. 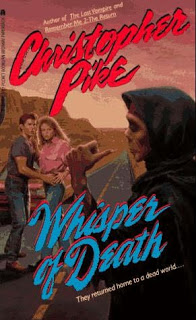 11
Book about 2 boys that time travel from 1980's (?) to Mayan (?) civilization with a Viking girl?
8
Looking for 80s/90s YA Horror Story Compilation
5
Children's book about a girl maybe being influenced by her black cat to become a witch
2
Paperback, probably young teen, published in the 1990s, about a group of teens trapped in a house with a vampire
3
90s Teen horror - boyfriend deal with demon
9
Book where a girl is left with grandmother and discovers she's a clone
2
Teen Horror Book
10
Book where a boy and girl are transported into a fantasy video game
4
Sci Fi book about a girl falling from space onto a polluted Earth and is trying to repair a ship to get back
13
Fantasy/magic book with female protagonist and a misogynistic villain in a ringed city