What is this Movie about giant pink spiders?

I saw this movie last night on my mum's TV just as I was shutting off the net to go to sleep, but after waiting for a bit for a commercial break, it didn't come, so I couldn't confirm the name of the movie.

From what I saw, there are these giant pink spiders. The first scene I saw was a group of people escaping in a bus. They stop at a petrol station to get supplies. Inside, when they go to pay, the clerk says he's not feeling well, and this boil he has on the back of his neck explodes and a smaller pink spider crawls along his face. The group finds more spiders coming from behind the eggs.

The male African American of the group is trying to hold back the spiders by spaying pest spray before the driver comes up with a spray and a lighter and they use them like flame throwers, although the effect doesn't seem to be as violent as you would expect.

A giant pink spider which seems to have followed them crashes though the window, and the group goes to flee to the bus with the African American saying he'll hold the spider back. He throws cans at it, and after nailing it, he flees too.

There's an old man who responded to an earlier comment from one of the characters about how spiders don't eat people, that he had seen a tarantula suck the eyeball out of a dead person. As the group flees to the bus, a giant pink spider comes down, and the scene cuts from that to the bus driver and back to the old man with the spider on top of him doing something to his face.

There is a part where the bus driver goes to call his boss to ask what to do. His boss in on a watercraft and angrily tells the bus driver, "You're in your 30's and driving buses for a living, take charge of your life and grow up" or something along those lines. However it seemed that the bus driver was hesitant of being the leader of the group and the boss's words, indirectly, are spurring him on to lead the group.

There is also a woman in the group who seems to be the mother figure. I think her son is a bus driver also, as when she makes a call to him, it cuts to a cheerleader bus with him driving (not answering his phone probably because he can't hear it over the cheerleaders).

This is "Arachnoquake". A quick look at the trailer suggests that buses and giant pink spiders are something of a theme. 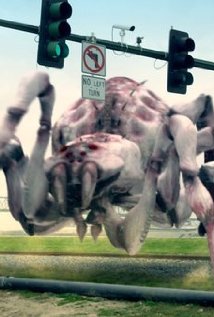 4
A zombie or alien horror movie whose protagonists are young adults
5
Story Identification: movie about a professor getting an unknown parasite and infecting his students for a study
5
1980s fantasy cartoon, heroes go in an underground realm and free the oppressed locals, after three trials (man-eating passage, spider people, dragon)
16
Movie with talking zombies, one zombie eats his own arm
3
Movie where a group of people travel back in time to the age of the dinosaurs. A woman is kidnapped by giant spiders, which put eggs in her stomach