At the end of Back to the Future III...

Doc Brown invents a time-travelling train to visit Marty after he travels back to 1985.

But where did this time machine get the requisite 1.21 Gigawatts of electricity, if the Mr. Fusion was attached to the DeLorean and the Doc had to work with 1885 technology?

In the absence of a canon confirmation (neither the film scripts, nor the cartoon seem to offer any insight) we're left with a few options:

The 1.21 Gigawatts doesn't need to be emitted continually but only in a single burst. It's possible that he has developed some way of generating at a lower wattage and then storing the electricity until it's needed. This is borne out by the fact that despite having been upgraded in the future, the Jules Verne Train is still puffing steam when it arrives in the present. The engine appears to be driving a spinning object housed between two magnets. If I had to guess, I'd say that this was some kind of magnetic synchronous generator: 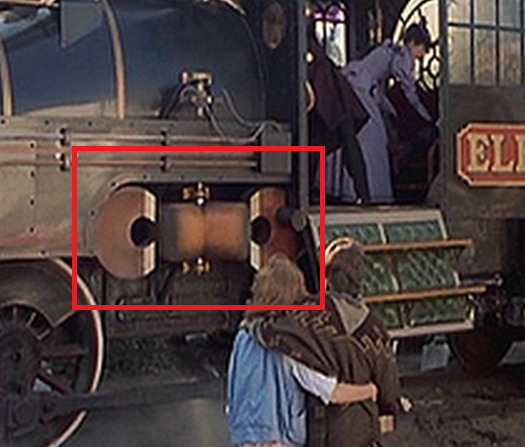 Doc Brown has ready access to a working Mr. Fusion unit in storage in the copper mine. It would have been a simple matter to remove it, use it to power the makeshift flux capacitor and travel to the future, purchase a second Mr. Fusion unit and return the original to the mineshaft (hat tip to @MatthewGreen)

Lest we forget, the Doc is a certified genius. It's not unreasonable to assume he could retro-engineer a Mr. Fusion unit (from scratch) and build one into the time-train. He seems extremely comfortable with how the unit operates and the fuel it can use.

We know that you can use lightning to power the flux capacitor. It's certainly possible that he simply rode the tracks at 88mph until he got a lucky strike but the Doc would also be aware that you can vastly increase your chances of a successful hit if you fire a firework towing copper wire into a storm cloud:

Doc said very plainly (and very proudly), "It runs on steam!" Steam locomotives did have steam driven electrical generators on them to power the lights and other electrical appliances, both on the locomotive and on passenger cars if they happened to have electric lights, even as early as 1885.

If I remember correctly, the voltage was quite low, about 32 volts DC. However, if the Doc enlarged the generator to handle a higher load, then stepped up the voltage with transformer coils, he could get his 1.21 gigawatts purely by steam alone. You only need that amount of power for a short burst, when the Flux Capacitor activates at 88 mph, so there could be a bank of capacitors or batteries residing in the tender behind the locomotive to store up the charge.

As mentioned by Valorum, there is a spinning set of coils set between two magnets on the locomotive's left-hand side which is likely the electrical generator, and as it continues spinning even as the locomotive is at rest it is likely building up the charge to engage the flux capacitor up on the front of the locomotive as well as providing power for auxiliary functions as need be.

Digging up the DeLorean buried in 1885 for the Mr. Fusion is a non-starter for one very good reason. Suppose Doc accidentally seriously damaged it by causing a cave-in or something as he was digging it out, rendering it unusable later on in 1955 when Doc and Marty dig it out of the mine to send Marty back to 1885? That would cause a serious time paradox, so the best thing to do would be to leave it where it was (which is why in Part III Doc and Marty don't try to dig it up for spare parts after they blow out the fuel injection manifold trying to run the car's engine on the saloon's rotgut liquor).

Sitting around and waiting for a lightning strike is also a bit of a non-starter. I mean you could wait potentially for months, maybe even years for a lightning storm, and even if there was a lighting strike, it wouldn't necessarily be on the railroad tracks as you were running the time-travel train.

The easiest way is the generate the power using the locomotive's own steam to drive a generator, and if I may paraphrase Bob Zemeckis, the Doc being a man of Science, he figures out a way to make it work using the 1885 technology, and even after a visit to the future to get the train hover-converted, he chose not to mess with anything else on it, as it already worked just fine running on steam. Doc is also hinted at being a bit of a steam train fan, as when he blows the whistle on the locomotive he and Marty use to push the DeLorean up to 88mph in Part III ("I've wanted to do that all my life!"), I don't think he'd be keen to convert it to some future-centric source of power anyway, it's just more fun for it to be a steam locomotive.

Did you just forget that that was a flying train without aerodynamic design, rotors and rockets?

The whole point: Doc Brown settled down in 1885 to do full scale research. He didn't need a quick solution anymore. With knowledge from future, a time machine inventor can certainly invent a 1.21 Gigawatts power source in a decade. Age of his kids should say he really did spend a long time in past.

I don't think he needs needs 1.21 Gigawatts anymore. It's possible the hoverboard technology gave him clues to make time travel more energy efficient. Otherwise why would he reinvent something he concluded earlier was too dangerous? There are hints in the final dialog. Doc Brown says "The future is what you make of it..." But every time they time travel they have to fight to keep the time line from changing. Maybe the majority of that energy is polluting the time stream creating the potential for drastic changes. Reducing the time travel energy needs to only what a steam locomotive can supply may reduce the danger of changing the past or future. Otherwise I doubt Doc Brown would risk his wife and kids on time travel.

There were comics that explain this, He uses parts from the hoverboard to rebuild the time circuits and the anti gravity components to store the 1.21 jigawatt charge with a long charge time. He fitted it to this: http://backtothefuture.wikia.com/wiki/Steam_tricycle

put on a diving suit and jumped to 2015, From there he secured the parts to finish his train for its first jump were he took his family from 1899 to past 2015 again.

From there he finalised the TimeTrain and his family travelled to meet Marty in 1985.

The line, "it runs on steam" to me does not imply that steam is generating the 1.21 gigawatts. Marty mentioned in BTTF3 that they didn't need gas because they had Mr. Fusion and Doc says that the internal combustion engine "runs" on ordinary gasoline and always has. Thus the dilemma (being out of gas) is what caused them to think of the train in the first place. It is plausible that Doc saying it runs on steam is just the method he is using to GET it up to 88 miles per hour and that he definitely has a Fusion Generator of some kind on board. No amount of steam pressure can generate that kind of power, especially with 1885 materials to hold it together.

It's simple. He used the parts he buried in 1885 to make a time machine. He just made sure to go into the future and get them to take back to 1885 so they will be there to make the time machine so he can go into the future and get the parts to take back to 1885 to make the time machine. A la Bill and Ted. Or he could have had a letter delivered to his future self like he did with Marty to have his future self drop of the parts in the past.

The way I've seen it is the Flux Capacitor is merely a storage/discharge component designed to safely handle the type and magnitude of energy required to make the time jump. Charging it up could be by a number of means but of course the critical function is in the discharge.

A Plutonium reactor would charge up the Flux Capacitor fairly quickly, but if you were patient (or marooned) you could take months or years to charge it up via steam.

I would assume Doc Brown's manufacturing facility would have developed to the point he could create all his own components, no doubt with Clara's assistance. I do wonder if he needed a fix 1.21 jigawatts to generate the time envelope, or if it were based on the mass of the vehicle. The train would be crammed with macrocircuits.

Has everyone forgotten the fact that he had a functional, futuristic hoverboard with him?

If we follow canon, we have to make certain assumptions:

What then? There was only one source of "modern/future" technology present and that was in the 2015 hoverboard. It's safe to assume that it has some sort of battery to store charge and perhaps some circuitry to aid in calibrating the rider's balance. If Doc didn't get the parts from the hoverboard itself then he could, hypothetically, have manufactured more using the hoverboard's original parts as a base. Clearly, this isn't the first solution to come to mind but there seems to be no alternative if we are to follow the logical course of events.

IMO, I don't think it was explained at all. In the first place, Doc couldn't come back in the Delorean because in 1885 they didn't have the plastic nor the technology to make the required repairs to the Delorean, else he could have just repaired the Delorean and came back in it. Since the train would have required circuitry and a flux capacitor and plastic, there is no way he could have created time travel circuitry in 1885, especially since in the letter he sent Marty he explains that the technology wouldn't be available till 1947. He obviously couldn't use the Mr Fusion from the Delorean on the train since there was a bad circuit.

rugmanrugman
1
2
Add a comment  |
Highly active question. Earn 10 reputation (not counting the association bonus) in order to answer this question. The reputation requirement helps protect this question from spam and non-answer activity.

13
Is Marty McFly Traveling to Parallel Universes?
23
Why don't Marty and Doc Brown use petrol from the Delorean in the mine in BTTF3?
9
How did the Doc land the Delorean in 1885?
19
How is the DeLorean powered in the final trip back in time in Back to the Future III?
4
Do any other dates in Back to the Future have any significance out of universe other than November 5?
15
Why did Doc build the Time Train?
15
How did Doc manage to build the time train in the 1880s?
25
Were there two DeLoreans in 1885?