Why didn't Rachel try to escape in The Dark Knight when held captive by the Joker?

In the Dark Knight, Rachel and Harvey are strapped to bombs and chairs, surrounded by oil drums. Rachel was very clearly conscious the entire time whereas Harvey was unconscious and woke up to her yelling. They've definitely been there for some amount of time (my guess is 30 minutes or more). Why didn't Rachel try to make an attempt to escape? Did she sit there for 30 minutes yelling?

The original screenplay is pretty clear on the subject. She's securely bound and has indeed been trying to free herself, albeit without much success.

Rachel is bound to a chair. Behind her are barrels identical to the ones behind Dent

Rachel : No. Harvey, we don't have much time.

In the film, the dialogue is slightly different but we can see that she's bound to a much heavier chair than Dent's. There's no reasonable way that she could free herself from well-tied ropes, even given an additional 30 minutes to play with. 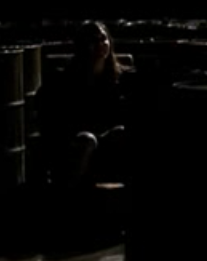 The Dennis O'Neill novelisation of The Dark Knight is again closer to the original screenplay but describes her predicament well. She can't move very much, she's securely tied and is also quite woozy from being knocked out cold

And she was sick to her stomach and her head was throbbing and . . . Where was she? Sitting in almost total darkness, the only light a thin, pale glow from some kind of crack and . . . she couldn’t lift her hands, nor do more than wriggle her leg. Because she was bound? Yes. Sitting, bound to a chair, in darkness, sick from whatever they used to knock her out, whoever they were.