What goes into the design of lightsaber hilts?

Certain lightsaber hilts look as though the were designed awkwardly. Namely, Darth Vader's and Luke Skywalker's (ROTJ) hilts have a box-like section that would make gripping it difficult.

Nearly every lightsaber hilt was unique in its construction, borne of the Force-user who created it and using whatever materials were at hand; typically, such weapons were created over a span of months. Ideally, the Jedi or Sith who created it would go into deep Meditation, poring over each individual component to be added and thus forging a connection with it through the Force.

But considering that Darth Vader and ROTJ Luke Skywalker both had robotic hands, maybe these box-like sections serve a purpose. Is this a coincidence? When Luke's robotic hand was constructed at the end of ESB, it looked like a normal human hand. I don't see what function these uncomfortable box-like piece would have in a grip of a sword-like weapon. 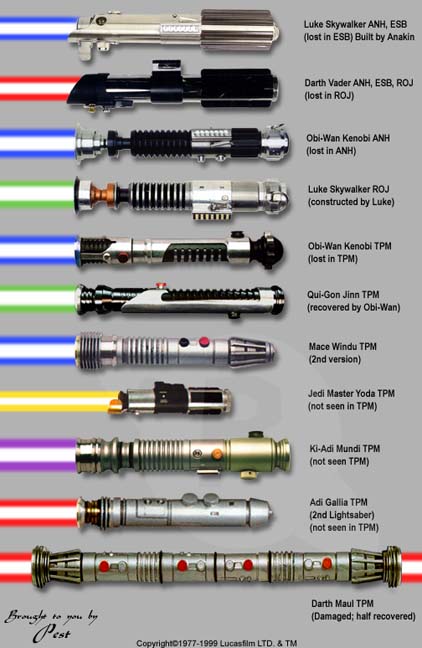 The lightsaber does not require excessive force to wield. Even a small child could swing one easily. Therefore, two-handed grips aren't needed (excepting Darth Maul's double-bladed weapon) for simple swinging, just for fancy maneuvers. The second hand helps control the blade, and for this a looser grip is better. This is likely why the second hand's position can have such difficult to hold grips - they may be used to better control the blade.

It's also possible they are used to more easily fit into charging stations (the novel I, Jedi mentions that lightsabers are recharged similarly to how blaster power packs are charged).

There is nothing about their mechanical limbs which requires this feature, nor does it interface with them in any meaningful way.

Each lightsaber was, indeed, custom made after a long design process. That said, there are definite styles that people follow, typically mimicking their Master (or the Jedi who instructed them in lightsaber construction) or a Jedi who's style they wanted to follow.

Not the answer you're looking for? Browse other questions tagged star-wars weapon jedi or ask your own question.

18
What advantages/disadvantages does a Darksaber have over a lightsaber?
21
How did R2D2 smuggle the lightsaber into Jabba's palace?
31
What was the inspiration for the design of R2-D2?
18
Was the design of the Peacekeepers inspired by the Stormtrooper design?
2
Could Luke's lightsaber call to Finn instead of Rey?
11
Was it illegal for a non-Jedi to use a lightsaber in the Republic?