Did Luke retrieve his Lightsaber from second Death Star?

At the end of Episode VI: ROTJ, Luke defiantly "hurls away" his lightsaber - according to both screenplay and novelization - before declaring "I am a Jedi, as my father was before me".

I have just re-watched the scene, and can't see anywhere where that lightsaber fell in any of the shots, nor do I see a single shot where Luke would pick up his lightsaber after the Emperor died.

Is there any canon information on what happened to that lightsaber? Did he retrieve it? Did he just build a new one and this one blew up together with Death Star 2?

NOTE: We know for sure that Vader's fell to the chasm below the walkway where Luke fought him, from both the screenplay and novelization. Since Luke's isn't mentioned to have fallen down, it may be presumed possible that it didn't.

Yes, he did. We see it in the "celebration on Endor" scene a few minutes later, just after he's cremated his father. 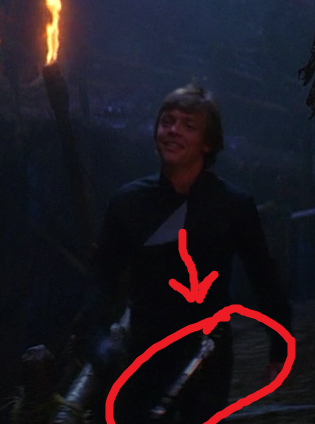 Under the circumstances, we can assume that when he "hurled it aside", it simply rolled under the staircase behind the Emperor 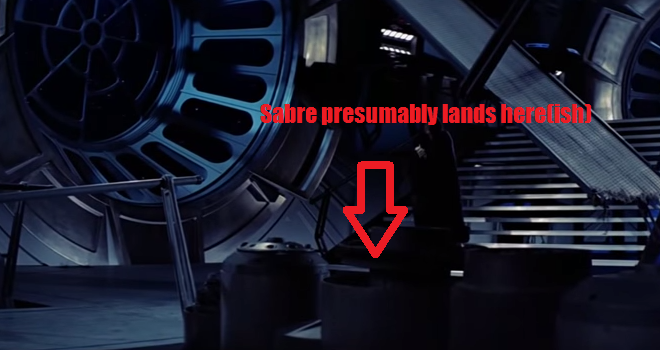 Update: According to the factbook "Inside the Worlds of Star Wars Trilogy: The Ultimate Guide to the Incredible Locations of Episodes IV, V, and VI", the saber was almost exactly where I guessed it was... 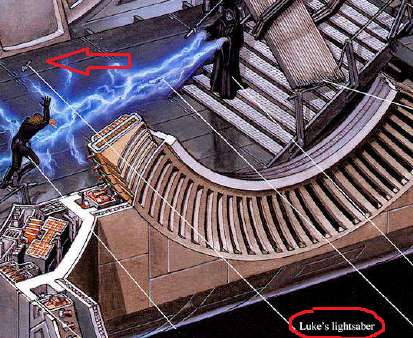 I would guess he retrieved it before helping his father to the shuttle bay. He was a rebel on a death star, he still would have been a target by imperial soldiers.

He most certainly did not have it when he dragged Vader across the hangar. It's either a tiny plot hole, it was in his prison wallet, or he had decided earlier that it made no sense to build one when he could build two for twice the price.

Not the answer you're looking for? Browse other questions tagged star-wars lightsaber luke-skywalker return-of-the-jedi or ask your own question.

71
Why didn't anyone stop Luke from leaving the second Death Star?
13
Why didn't Emperor Palpatine use a lightsaber to prevent his fall into the pit?
12
Does Luke still have his green lightsaber?

13
What goes into the design of lightsaber hilts?
28
How did Luke suddenly know that Leia was a "Princess"?
9
How does Luke learn to fight with a lightsaber?
26
Why is C-3PO kept in the dark in Return of the Jedi while R2-D2 is not?
38
How could Luke hide from Vader during the duel on Death Star II?
13
Was Darth Vader's lightsaber on the wrong side to stop Luke from killing Palpatine?
50
Why didn't Luke use his lightsaber during his mission on the first Death Star?
4
Did Luke have this necklace in his hut on Ach-To?
11
Prior to Cloud City, did Vader know that Han and Leia were "friends" of Luke?