Ask Question
Asked 10 years, 1 month ago
Active 3 years ago
Viewed 20k times
30
Closed. This question is opinion-based. It is not currently accepting answers.

I came to this thought that E.T. was in fact a Jedi (or at least Force-sensitive) and the more I think about it, the more it seems possible. This would explain many things.

First, we already know that E.T came from the Star Wars Galaxy.

So, if he was a Jedi, he would show some force powers:

So, the only thing left is to determine if all others member of E.T.'s species (Children of the Green Planet) possess those powers. I hope we could find this information in "E.T.: The Book of the Green Planet" (a book from E.T. franchise which is the sequel to movie's novelization).

I think it is fairly clear that E.T. is from the species of the Star Wars galaxy, probably having come on a generational ship, since the journey would be very long indeed. Since the Force pervades the galaxy and everything in it, and can be used for purposes of manipulating it, I think it's reasonable to assume that E.T.'s "magic" did use the force at some level, even if it wasn't as directly as a Jedi would have (there is precedence for this, I believe the Force-witches of Agamar, as well as several of the cultures Jacen went and studied with).

However, I don't think E.T. was a Jedi, at least as we know them in the Star Wars time frame.

So I think that yes, E.T. was on some level using the Force, but no, he was not a Jedi knight, at least as we know them from the Star Wars era.

A Jedi is defined not be the symptomatic effect of his abilities, but by his connection to the Force. Since E.T. is never shown to be connected to the Force (neither are his people in SW EU), you can not really attribute any of his abilities to being a Jedi. It's an elegant theory, admittedly, but one that has no canonical proof either way.

NITPICK: As phantom42 correctly noted in the comment, technically speaking, the question as stated is 100% clearly false, as a "Jedi" is strictly speaking only someone in the Jedi Order, which E.T. clearly was not. What the OP probably meant to ask was "Was E.T. a Force-sensitive or rather Force-user" - so in both the question AND in my answer, "Jedi" should read as "Force-user".

I really think you're reading too much into these cross-cameos. Spielberg and Lucas are good friends and include nods to each other. I really think "easter egg," or more specifically attentive fan gratification, is all it is. Not canon or hidden meaning. Following this question's logic, R2-D2 is part of the Close Encounters of the Third Kind Universe because "he" was part of the Mothership.

They're just having fun and not expecting us to equate all their works as a cohesive Whole. The Yoda costume in E.T. being a prime example.

Is E.T. a Jedi? Perhaps, providing that the Jedi Council and its ways of "being" and teachings from a long long ago and a galaxy far far away still exists by the time Elliott's E.T. meets with humans.

Jedi is a religion and way of life, E.T. may just as well be a Sith Lord. Life preservation is part of the dark side of the force. Are the Sith not the only ones who practice life extending abilities? Is that not the whole MacGuffin behind Anikin and Vader? Anakin, as he was becoming a Sith told queen Amadala over and over again on how he would save/heal her and what did E.T. do? Heal that little boy!

Either way it is apparent that ET has control of the force which is one of the requisites to be a Jedi or a Sith or any other paths of such being.

It is likely that ET is probably not one of those seen on the counsel in star wars and he simply recognized the Species of the "Yoda" mask.

The action figures and other references implicate that the ET species brought knowledge of the Star Wars legacy to Earth. Which would mean the main characters in the saga have long since past and was translated to human for prosperity and in preparation of the unification of species.

So we have an ancestor of Elliott's ET bringing droids of similar models, if not 3po and r2Dtoe'a themselves to Earth and an epic story that transcends galaxies. The mythology is suppressed by the Egyptians until the 30s when the Joness open the way for some one to see the droid glyph, and for Lucas to find it and share his translation with the rest of us. 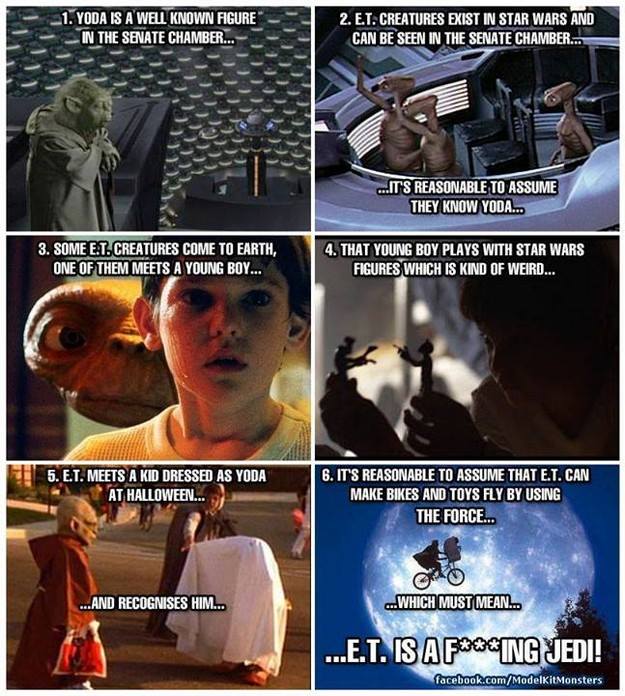 Video about the E.T. is a Jedi theory.

Not the answer you're looking for? Browse other questions tagged star-wars powers jedi et-the-extra-terrestrial or ask your own question.

205
Are E.T. and Star Wars in the same universe?
20
Why do E.T. and Elliott get sick and how do they recover?
11
What was the change made by Spielberg to E.T.?
0
How was E.T character created in the movie E.T -The Extra Terrestrial?
3
Does E.T. have very high IQ?
39
Who was/were the first Jedi?
13
Was Yoda's departure an intentional reference to E.T.?
12
How old was E.T.?