What's the purpose of solar panels of TIE fighters?

I don't think those sideways panels are for trapping solar energy because there should be more efficient power source in TIE fighters. But they look like solar panels.

What do those panels do in-universe?

Multiple sources confirmed that they are indeed solar panels:

As far as energy:

... most distinguishing feature is the pair of dominant solar array wings...

... The TIE fighter draws much of its energy from solar radiation absorbed by the array wings. (page 180) 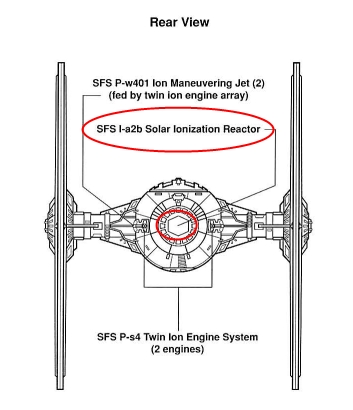 In the new canon Star Wars: TIE Fighter Deluxe Book and Model Set which is the only canon source I can currently locate on the functionality of the "wings" of the TIE series fighters.

Each wing has six "solar collecting arrays" with "energy accumulator lines" connecting each of the panels to the reactor where it was channeled through a pressurized gas, stored in the ventral fuel tank, this reaction emits energy which then outputs power to the twin P-s3 ion engines and L-s1 low temperature laser cannons.

So from that I gather that it's not solar powered, but the reactor requires high intensity light to work and concentrating all the light from the surfaces of those 12 panels into a tiny area inside the reactor is required to make that high pressure gas release energy to run the engines and weapon systems. So it's basically a solar catalysed reaction powered, kind of like using the solar energy as a sparkplug to ignite the fuel. It requires solar radiation for the reactor to run, but it's not solar powered.

The wings are dual purpose. They collect energy in the dark panels and the outer surrounds of the wings dissipate heat. Energy in different forms flows both ways. Remember the technology in Star Wars might not necessarily or should be able to be explained to us. Don't get me started about cloaking, which is actually once a fantasy in the Star Wars galaxy also. Now it's everywhere, Darth Maul's ship and the TIE Phantom.

10
How can S-foils (X-foils) help with heating in space?
10
How many official “Republics” are there in the Star Wars universe?
15
Where do TIE Fighters generate thrust?
17
Are the humans in the Star Wars Galaxy really humans?
8
Where do X-Wing fighters—and similar small scale Rebel craft—dock to refuel and tune up when in space?
8
Can blasters—and related hand-weapons—in the “Star Wars” universe “overload”/self-destruct similarly to the way they do in the “Star Trek” universe?
10
Why do Rebels have so many [Letter]-Wing Fighters?
23
Do Mandalorians truly never remove their helmets?