Why is there no electricity available in the Walking Dead Series?

I've been wondering this for a while. Why is there no electricity in the post apocalyptic world?

As the documentary series Life After People showed so eloquently, without people manning the equipment power plants break down and stop working very quickly. Even the powerful hydro-electric Hoover Dam would stop providing power after just a year or two due to requiring constant maintenance to keep the turbines spinning. I think you seriously underestimate the amount of work required to operate even a small power plant.

My uncle is an electrician who is paid a ridiculous amount of money to repair electricity-producing wind-turbines in southeastern Australia. His job consists of spending 10 hours a day on-site, just in case repairs are needed. The reason for this is that while the turbines could spin for 100 years without fail in ideal circumstances, circumstances are never ideal. The biggest issue is birdstrike; Shannon often laments that his job isn't repairing electrical faults, but scraping dead birds off the turbines and doing a quick check that no wires were broken after the steelworkers - who are also on-site 10 hours a day - hammer the turbines back into place. And wind-farms are considered Australia's least labour-intensive power-producing facilities.

This page from the American Bureau of Labor Statistics states that in 2012 there were 60,700 people working in power plants in the United States. That includes supervisors, management staff, and grunts on the floor like my uncle. The site also points out that power distribution is the sort of job that requires long term on-the-job training, even if you have a university degree in the subject. How many of those 60,700 people survived the outbreak, and the roaming bands afterwards? And that's just people working in the plants themselves. What about the people that repair the power lines between the plants and the residences, commercial and industrial areas that rely on those plants for power? How about the many power lines which actually run underground? How about the divers who clean molluscs and freshwater kelp off the water turbines in hydroelectric dams? They're not counted, and I would be surprised if they didn't amount to at least double the number of people the Bureau does count in their statistics.

Since we now know that power generation and distribution is actually considerably more labour and time intensive than you originally thought, we can understand why there aren't very many sources of electricity in the post-apocalyptic world of The Walking Dead. This is something which was handled very well in the latter two films in the Mad Max trilogy, most notably in Mad Max: Beyond Thunderdome, where the only person left alive in central Australia with the training and skills to actually run a bio-mass fueled power plant, Master (one half of Master-Blaster), was able to essentially set himself up as a dictator for a short period of time, due to the fact that none of the post-apocalyptic survivors were willing to go without their newly-regained electricity and running water. There are actually very few people out there who possess the necessary skills to run power plants, and those who have those skills would be in relatively short-supply, and able to command a high price for their skills, in a post-apocalyptic scenario.

This is not to say that there will be no electricity whatsoever. I myself possess the requisite skills to run a small generator, as do most of my family. But most commercially-available generators that anyone who is not an expert in the field can operate require petrol. And one thing Mad Max - and most other post-apocalyptic programs - gets wrong is that, as this old Cracked article states, gasoline goes bad very quickly. So in addition to not being able to drive in their magically never dirty car, the protagonists of The Walking Dead would also not be able to use most available generators to produce electricity.

With electricity gone, cell towers are obviously not operational. The satellites are probably in orbit, but with no Umbrella Corporation buried deep underground to communicate with they're essentially useless. Searching for tips on how to survive the zombie apocalypse online won't be possible - and after doing a quick search for that Cracked article I wouldn't recommend most of the available online advice anyway - and even landlines would be rendered useless quickly by the lack of people turning up to work at the switching stations. Your local petrol station or mall would likely still have power from their back-up generator for a short time, but roving bandits will probably steal them without any real idea how to use them very quickly.

In short, electricity goes bye-bye in any situation in which law and order break down. Zombies simply speed up the process by eating the staff.

Electricity in modern society is a byproduct of a number of other industries completely interrupted by the "Walker Apocalypse". Without this complex network of services and infrastructure, the electrical grid will grind to a halt rather quickly.

Here's why the power grid we take for granted and which appears ubiquitous would quickly grind to a halt during a natural (or unnatural, in this case) disaster.

Calculation examples using these two formulas and the assumptions below:

Amount of fuel used to generate one kilowatthour (kWh):

Lastly and most importantly: Skilled workers are needed for every step of this process.

This shows only the simplest ideas that are required to be dealt with regarding the generation of electrical power. This does not deal with the other important aspect of electricity, the distribution of power which requires people to maintain electrical substations and bulk electrical power transmission lines. 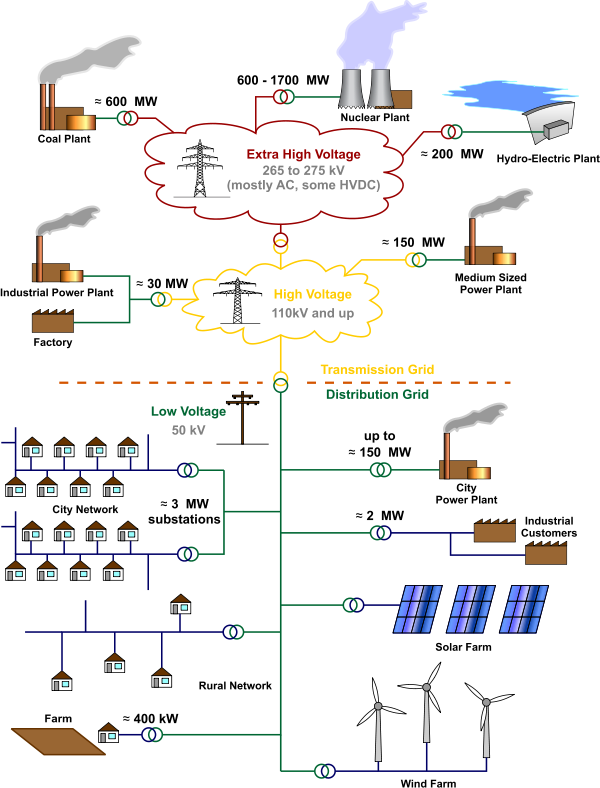 This question was answered by The Straight Dope back in 2004. I won't reprint the whole article, but to summarize it, electrical power plants are pretty complex. Without human intervention something will cause a shutdown within hours (probably fuel depletion for fossil-fuel plants) or at most a week or so (automatic fail-safe shutdown for nuclear plants). Hydroelectric plants (dams) can keep producing electricity for months, but there's still the problem with the rest of the electrical grid (switching stations, power lines, transformers, etc.). Without regular maintenance of the infrastructure the juice isn't going to go anywhere. It's worth noting for our overseas friends that in the U.S. most local power lines are above ground, making them very vulnerable to the elements.

You are of the opinion that the electricity grid is incredibly robust?

It is not, it is made of glass and capable of self destructing extremely quickly.

In order to stop this happening, grid operators employ a variety of techniques, some of which are automated, many of which are manual. This can include control of both loads and generators, each of which can be turned up or down to maintain balance.

It is not necessarily a matter of power plants running out of fuel, or coolant, and it certainly won't be due to them missing their scheduled repairs. If people aren't actively monitoring the grid at all times, it can be broken by too much wind/sun, not enough wind/sun, a generator or transmission line breaking, everyone turning their kettles on in the ad breaks of a popular tv show, lightning strikes on wires, everyone turning their equipment off at the same time.

Stock up on batteries. The grid would be down within hours-days.

Well worth a read

As SJuan recommended, a summary of the article:

If the zombie takeover is sudden, you'll notice the unstable power grid within 4-6 hours and most of the US and Canada will be out of power within 24 hours. If the workers have time to prepare and stock pile fuel, and isolate grids, you'll get a few days from a nearby coal power plant and up to a year if nothing goes wrong from Nuclear.

In the Walking Dead it's not clear which scenario it was.

As they find out at the end of season one, everyone is already infected and the zombification only occurs after they die. This suggests it was a sudden outbreak, and once news like that breaks it's hard to imagine power station workers putting in extra shift hours to stockpile fuel rather than rushing home to help barricade their families in their home.

Based on the way in which California's rolling blackouts happened in the early 2000s, when one part of the grid fails, another supplier (from another part of the grid) can be tasked with taking up the slack. If there isn't enough supply or if no-one presses the correct switch, the grid simply goes black with no electricity supply.

Since coal-fired power supplies the lion's share of electricity in America (almost 40% of the total) and since these stations require coal to be dumped into the burners by operatives on a 24/7 basis, the reality is that you would have a grid shutdown within hours of a zombie apocalypse.

Nuclear stations would almost certainly shut down within a similar timespan as automatic cutoffs are in place to recognise that there are no operators (e.g in the event of everyone dying of radiation sickness) and failsafes kick in.

Geothermal, Hydro and Solar stations would continue to manufacture power for prolonged periods of time but when the grid systems recognise that there's almost no consumption, these would also shut down to prevent overload.

I am unaware of canonical explanations so answer is surmise

The simplest explanation is to generate power a plant has to burn some kind of fuel which will eventually run out without someone trucking it in or throwing it in the boilers so to speak. Lack of power from nuke or hydro plants can be explained by zombies being attracted to the noise generated by the power substations and destroying the equipment, the technicians shutting the reactor down before evacuating or Atlanta and its surrounding areas not having hydro power plants

Cell phones most likely would work the problem is without power you cant charge them.

However the I was wondering about the question itself. There have been enclaves in Walking Dead that had power. And yes the medical station power plant was dying but it was working at the time of the party visiting it. The 'Governor' had established enough infrastructure to have electricity for a community, and he did. Granted not the constant power we have, measured and used as the expensive commodity it is.

With the implication of other enclaves and even government bodies still existing one could assume they have established power generation if they are large enough to have the manpower and/or technical expertise. And although power plant maintenance is a difficult task, most electricians could rig up smaller generators from a flowing water source and a motor.

Now as to why the main characters don't have electricity, they have not remained in a single place long enough with enough people to establish the infrastructure needed.

So it seems there is an agreement that there is electricity in the Walking Dead . . . .