Is it known what the markings mean on Drax The Destroyer's body?

Especially in the MCU, the markings on Drax' body are quite extensive (and very cool-looking I might add). They have a heavy leather-like texture. 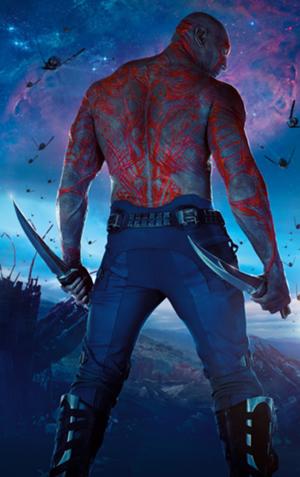 From what I could find, Drax's body is alien and apparently for now, it has not been disclosed what kind of alien that would be.

I have read some, but not all, of the canon Guardians of the Galaxy comics, where his markings are more subtle, and more tattoo-looking. 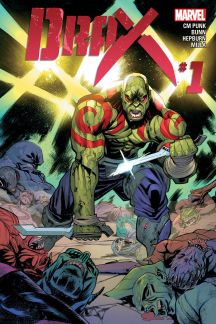 Is there any more information known about his markings in any source or canon?
I am specifically referring to his later incarnations, as his first appearances do not seem to feature this kind of body decoration.

There was a deleted scene that addresses this within the Marvel Cinematic Universe.

David Bautista explains in an interview with Zap2It, but specifically skirts the question itself.

Some of that background was explained in a scene that never made the final cut of the film. Drax has some elaborate tattoos in the movie, but the story never touches on them.

The scene was included in the Phase 2 Box Set.

This is the history of my life. This here, my soul union with Ovette upon Mount Kilos.

In the comics, as far as I can find, Drax had no tattoos when he was killed in an early story, and then suddenly has them when he is resurrected. I have not found any explanation as to the exact origin or significance of them.

Drax in the Marvel Cinematic Universe is not the same character that appears in the canon Marvel Comics Universe. Visually and thematically they share similarities, but the overall character design is quite different.

Neither Universe has revealed to date the actual meanings of the tattoos that adorn their bodies.

In the Marvel Cinematic Universe, Earth-199999

Drax is a humanoid of an undetermined species who has through the use of technology or perhaps ritual scarification, scored an image of various skulls and other death-oriented iconography on his body. A closeup of said tattoos reveals the ornate and macabre nature of the images. Given that his people are considered technological primitives, scarification is the more likely source. 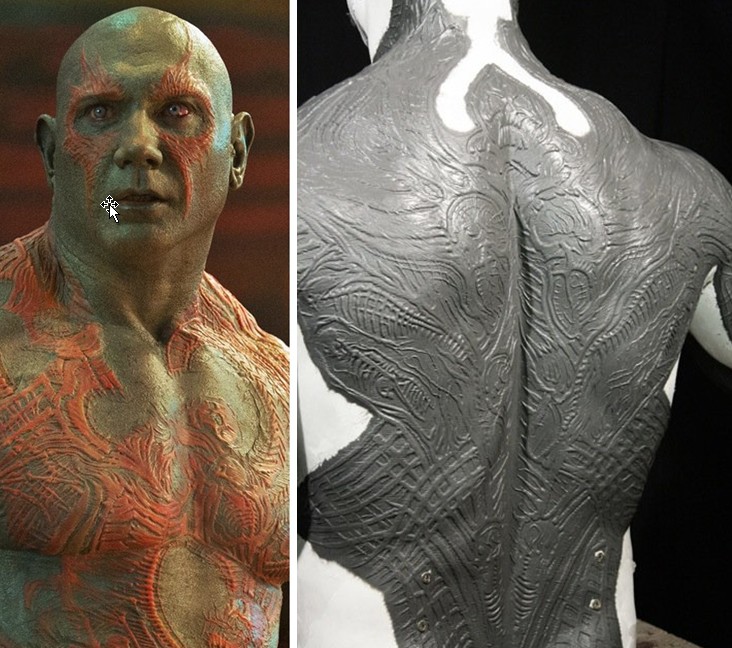 This is a closeup of one of the seventeen prosthetics used in the Drax makeup taking 5-6 hours to apply.

Drax the Destroyer was an ordinary human, Arthur Douglas, who was killed by the Mad Titan, Thanos. Sensing an imbalance in the universe, the abstract entity Kronos, brought back to life and empowered Douglas with what he believed would be sufficient power to battle and destroy Thanos.

Note the skull iconongraphy which shows up on all the Destroyer designs from this period. The skull motif is worked into the new prosthetics as well. Drax on the left was the calm and cerebral version, the one on the right, was powerful but childlike in intelligence. 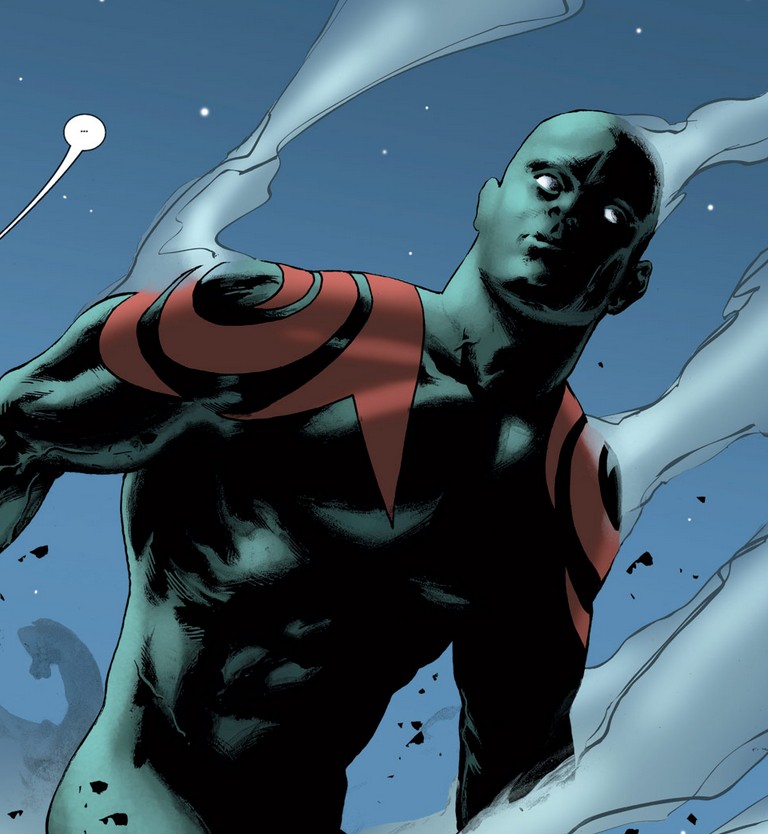 This is addressed in Marvel's Guardians of the Galaxy: The Art of the Movie in a nice bit of detail. Initially, whilst they are referred to as tattoos at points the main way they are described is scarring, or for the more detailed version: "red keloid scarring".

Justin Sweet gives a nice overview of what they mean:

"All the tattoos on Drax's body meant something important about his family-like about his daughter and wife and father." Concept Artist Just Sweet says. "But he needed to look scary, too-so even though the moments are reflective, they look kind of demonic. It's intended to be from his culture."

We get a detailed view at several of his tattoos as well and what they mean. 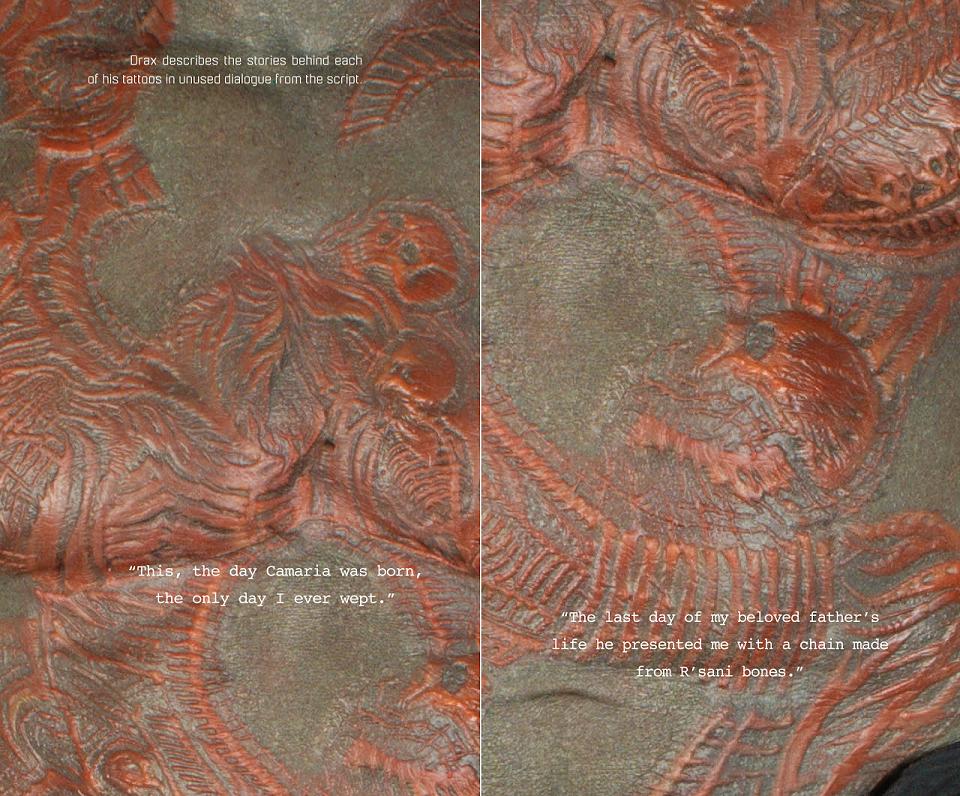 Drax describes the stories bhind each of his tattoos in unused dialogue from the script:

This, the day Camaria was born, the only day I ever wept.

The last day of my beloved father's life he presented me with a chain made of R'sani bones. 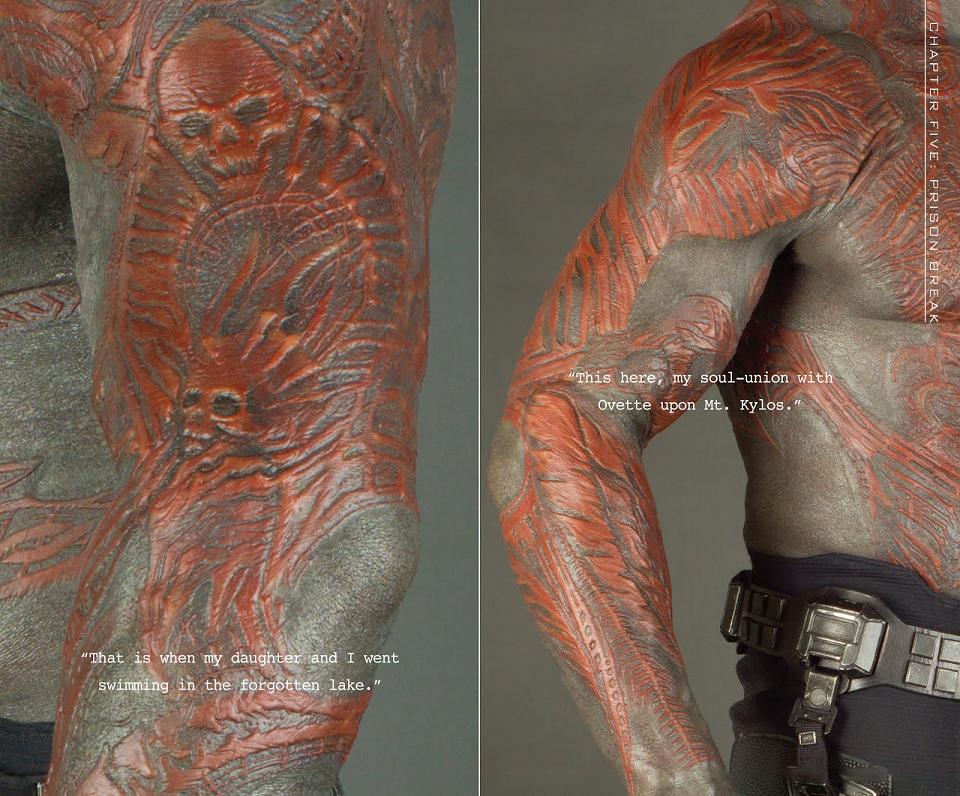 That is when my daughter and I went swimming in the forgotten lake.

The deleted scene is available on YouTube where Drax covers a couple of these from above.

Not the answer you're looking for? Browse other questions tagged marvel marvel-cinematic-universe guardians-of-the-galaxy-1 drax-the-destroyer or ask your own question.

7
What race is Drax the Destroyer's Body?

3
What is the Destroyer's power source?
13
What does Groot's last line mean in The Guardians of the Galaxy (movie)? (Warning: spoilers)
7
What race is Drax the Destroyer's Body?
6
What are the origins of Ronan the Accuser?
16
Did the original Drax have trouble with metaphors?
18
Why was Drax in the Kyln?
24
Has Drax in fact mastered the ability to stand so still that he becomes invisible?
6
What is Groot's body made of?
3
Is the portrayal of Drax in the MCU true to the comics?