When do Batman and Bane first fight?

I'm working on a project on Bane and I am having trouble following the main storyline in the comics that involve Bane. In particular I am looking for the comic that contains Bane and Batman's first meeting and fight.

What I've gathered is Bane first appeared in Vengeance of Bane but decides he's not ready to fight Batman, then he appears in Killer's Bane where he still just observes and prepares for Batman, then he still has no interaction with Batman in #656 Besieged. Then I lose the trail and everything mentions their fight in the Batcave where Batman has his back broken. Vengeance of Bane: Part 2 says they have previously fought, so I assume that came after their fight in the Batcave.

In what comic did Batman first fight Bane?

This includes the famous "back breaking" scene depicted on the cover. 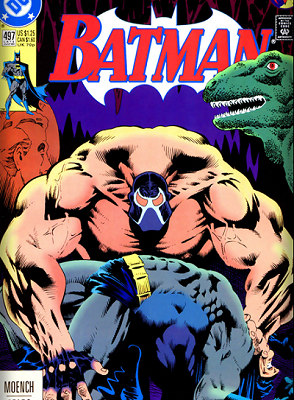 Bane and Batman first meet in the comics in Vengeance of Bane. This story explains the origin of Bane and how and why he goes to Gotham to break the Batman. Bane and Batman meet and talk (Bane threatens Batman), but there is no fight (just a batarang thrown) when Batman is investigating the assassination of some mob guys (Bane had killed them because they had betrayed one of Bane's henchmen in the past).

In the following issues Bane observes Batman. Then Bane puts his plan into action, freeing all the inmates in Arkham to get Batman exhausted by fighting them. Then Batman has to fight Bane's three henchmen. It is not until he returns to his Batcave that he meets Bane for the second time, and then they really fight for the first time (although, exhausted, Batman can't fight back much...).

gets back in physical shape and escapes Blackgate prison

so there couldn't have been any fights between the two of them between the time Batman's back got broken and this specific time. They actually don't fight in this second part of Vengeance of Bane, but Batman tells him that this time, with him not exhausted and Bane not doped with venom, he is ready for a fight. That might be the reference to a previous fight, the one in which Bane broke Batman.