What cartoon had a girl going to another dimension, assisted by a boy with a computer?

I have a vague recollection of some sort of cartoon in which a (pink?) girl is sent on missions in some sort of other dimension. I remember she has a friend instructing and helping her out; I think it was a boy with some sort of computer. They had a link between the worlds so that they could communicate. I remember just one scene, where the girl was sprinting towards the portal away from the dimension, but she was running out of time to escape?..

The cartoon was in English, and probably aired about ten years ago.

I'm so sorry if this is too vague to be answered, but it's been driving me crazy for weeks! Many thanks to anyone who knows what I'm thinking of.

Jeremie Belpois, a profoundly gifted and intelligent thirteen-year old boy attending boarding school at the fictional Kadic Academy, one day discovers a quantum supercomputer in an abandoned factory near his school. Upon activating it, he discovers a virtual world called Lyoko and Aelita, a young girl trapped inside it.

The girl, Aelita, has pink hair.

The show first aired in the US on Cartoon Network ten years ago, in 2004. 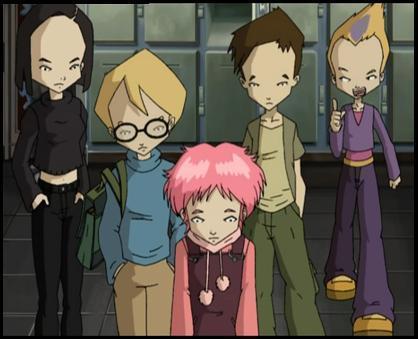 The Life and Times of Juniper Lee

11
A cartoon/anime with a blonde-haired boy with blue eyes and his father(?), they're looking for 7 gems/diamonds
1
Cartoon/anime where a girl turns to stone and the boy has a “hoverboard” and travels around with her body
7
Which 1970s Spider-Man cartoon had sentient alternate dimension plants?
9
Cartoon series about a boy having nightmares
4
2000s sci-fi cartoon show with a group of friends sucked into a console/TV to another dimension
10
Looking for a cartoon where three kids wake up in a different world