How much unclaimed space exists in and around Star Trek empires?

One of the most common things that happens in Star Trek (at least TNG, with which I am the most familiar) is that two starships from two nations/empires will encounter each other, and neither seems to have a better claim to being there than the other. They'll squabble over the rights to a planet, or to searching the area, or simply to being "here." But with several notable exceptions (such as the Neutral Zone), they don't seem to claim that the other is trespassing very often. Obviously, it does happen, but it is also very common for neither ship to make a claim on the local territory in a national sense.

This would seem to imply that, like European ships in the Atlantic, there are wide expanses of space that are unclaimed and equally traversable by all. When a Federation starship, a Romulan warbird, and a Klingon bird of prey are in an argument, and none claims jurisdiction, it would imply that none has jurisdiction. It paints a picture, again like European naval powers, of national claims extending only X distance from the "shore" (in this case, a citizen planet), with wide expanses of "neutral" territory in between.

For example, this map of modern "territorial waters" shows that most of the ocean remains mutually unclaimed (by treaty, in this case): 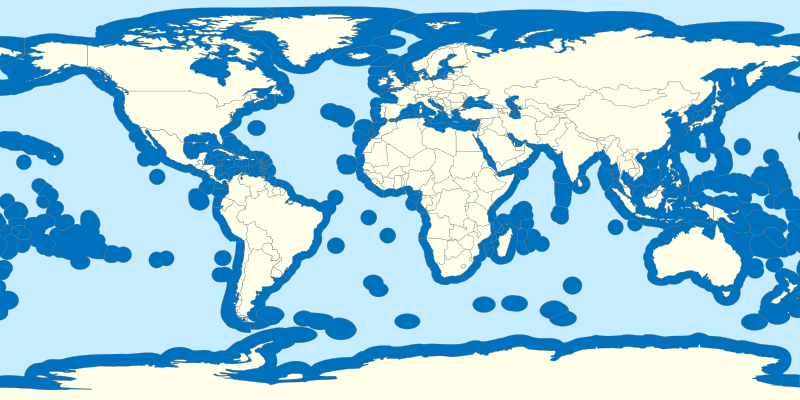 And yet, every map of the Star Trek galaxy that I can find seems to be pretty filled up, more like the landmasses of Earth, where each nation butts right up against its neighbors and national territories are contiguous and unbroken: 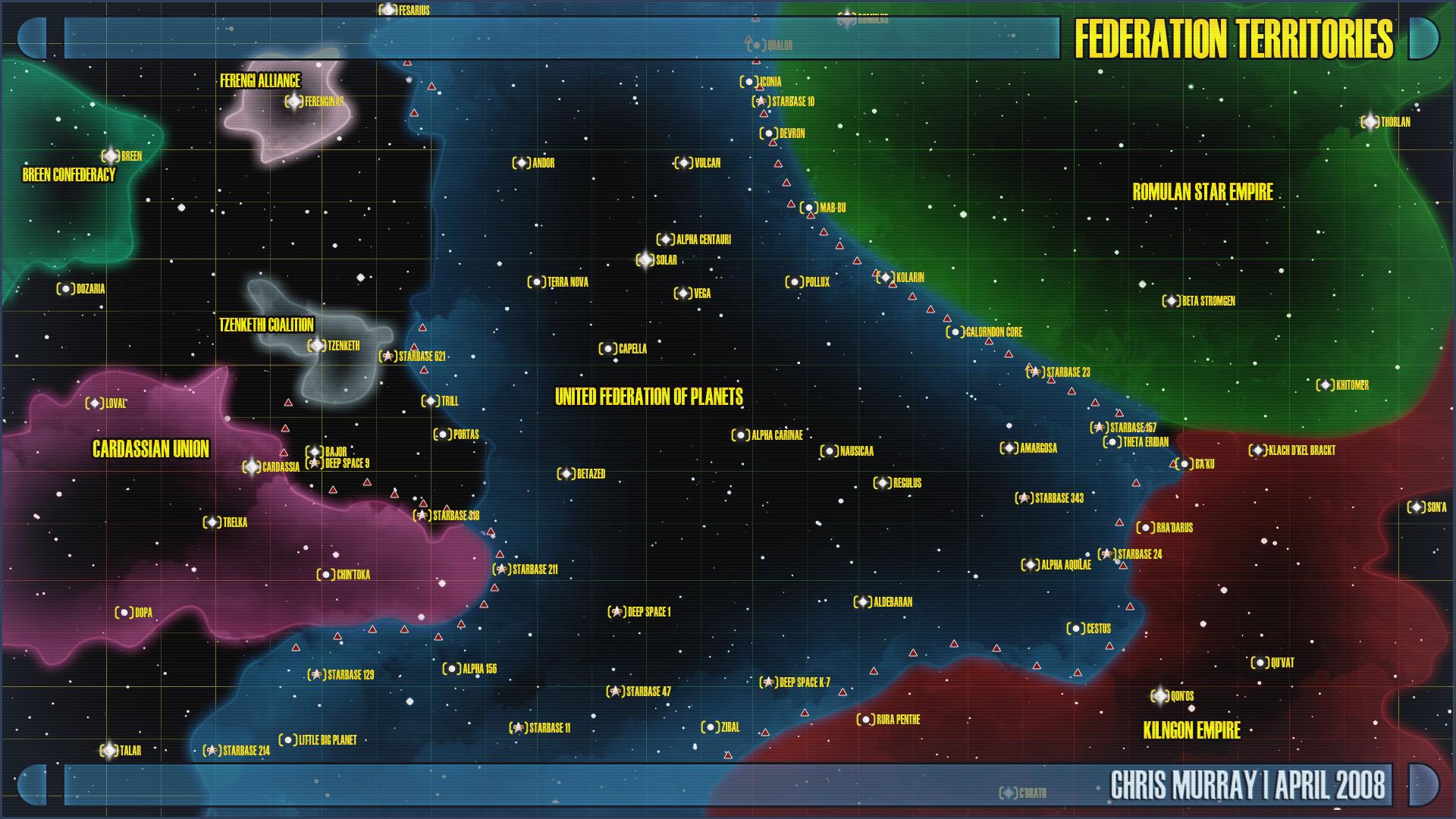 Now, obviously even the thinnest of margins on a galactic scale allows for room to maneuver, and the galaxy is 3-dimensional so there may be nuances that don't make it onto the map. But still, it is hard to imagine how some of the events played out. For example, in The Chase, ships from the Romulan, Klingon, Cardassian, and Federation fleets are racing from world to world in what seems to be neutral territory. According to the map above, at least one of the first three ships would have had to travel straight through the Federation (or an incredible distance around it on the Z-axis) to be in competition with the others.

So my question is this: Is the territory of the Federation (or any other galactic empire) fully contiguous and bordered by neighboring territories? Or is the map more complex than the above example, featuring spaces within a nation's territory that allow other ships to pass through, so long as they didn't approach any claimed planets?

Put another way, is galactic space more like the Caribbean on the above map of Earth, completely claimed by one nation or another, or more like the south Atlantic, where individual star systems are claimed but there remains traversable space in between?

In the absence of a detailed, canonical map -- which doesn't exist -- it's hard to give a canonical answer.

However, scripts generally seem to treat boundaries more like countries on a continent, particularly when it comes to boundaries between powers who are not fully at peace with one another. Example: Star Trek: The Undiscovered Country, USS Excelsior is explicitly told to remain on the Federation side of the Neutral Zone. Similarly, all the way back in TOS: "Balance of Terror", there's a Neutral Zone boundary with the Romulans, the crossing of which is an act of war. The fan-made map you post above even shows the neutral zone monitoring stations along those two borders.

An argument could be made that these are special cases representing known hostile governments, but they're the main examples we have for questions of violations of territory. We know that at one time there was also a volume of space disputed by the Klingons and the Federation that the Organians insisted the two must learn to share as a volume, with claims to individual planets going to the side with the best development plan (we see this most explicitly in "Trouble with Tribbles").

This implies that there could at least have been a period in which that part of space was riddled with exceptions -- a Federation planet here, a Klingon system over there -- and that the treaty probably required each side to guarantee access to the others' worlds. By Star Trek: The Search for Spock, however, the Organians appear to have evaporated, and the treaty along with it. There's a whole wealth of potentially unexplored stories for what happened in that interim, but all we know in the end is that the accident on Praxis forced a more mundane peace treaty upon the Klingon Empire.

Your World Map does not show territorial waters, rather it shows Exclusive Economic Zones (EEZ's) which go out to 200 nmi, all vessels can transit the 12-200 nmi zone, but only the host can use those the economic resources in those zones, aside from transit. This may be akin to what Star Trek Maps show, not actual territory, an "EEZ" of sorts.

Not the answer you're looking for? Browse other questions tagged star-trek star-trek-tng politics map or ask your own question.

11
How much footage (approximately) exists of Star Trek Phase II?
11
Is there a galactic map showing the homeworlds of the various humanoid species?
20
Why is Federation Space divided?
23
How has no one annihilated the Ferengi?
29
How would Starfleet know what a Romulan looks like in Star Trek 2009?
2
Why isn't there any consequence of Kirk's actions in "The Enterprise Incident"?
9
Is the spore drive instantaneous?
10
How did Lt. Stiles know that Romulan ships are painted with a bird of prey?