I need help jogging my memory about a low budget science fiction film (or perhaps TV series) from the late 1970s or early 1980s.

The first scene of the movie depicts the characters on a disabled luxury cruise ship stranded in space. That's all I remember. I don't think it's Battlestar Galactica or Buck Rogers.

"The first interplanetary cruise ship malfunctions halfway to Jupiter, forcing most of the crew and passengers to abandon ship. A handful of people are trapped onboard"

Wikipedia has an abridged overview of the film's first act;

The film takes place in 2191. The latest space liner for the Whitestar Lines is the Arcturus, currently on its maiden voyage. On its approach to Callisto, for unknown reasons, the ship's computer, the Main Cerebral, declares a red five emergency, and orders "abandon ship". Most of the crew and passengers leave in lifepods. Captain Montaine (Christopher Cary) stays on the bridge. Cerebral begins to evacuate the ship's compartments of oxygen. Third astrogator G.W. Simmons is caught on deck 16 while it still retains an atmosphere. He runs into Fiona Harrison (Kristine DeBell) a passenger from deck 15 who did not leave with the others because she had to go back for her bird, Dwayne. 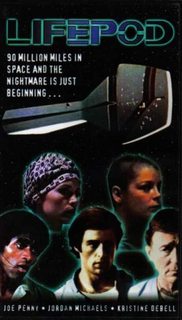