Is there evidence of purely artistic works in Middle Earth?

yesterday, student's & i realized there is no fiction in middle-earth. prbly no art. every story = story of something that actually happened

Is there any evidence in Tolkien's writings of purely artistic works (fiction, etc...) that is not based in a historical event?

I am primarily thinking significant works of art, not crafts. Certainly, there is evidence of non-historical decoration in Bilbo's house etc... (at least I think).

I think this is a good question, and one we might ask of a lot of works of fiction written on a grand world-building scale.

Unfinished Tales also notes that the story of Queen Berúthiel's cats (and how sure they are to find their ways home on a dark inclement night) referenced by Aragorn in LotR is possibly unique within Tolkien's work as a secondary sub-creation (i.e. a story understood as fictional by characters who are themselves fictional).

One might examine the architectural ornamentation (e.g. repeated use of the two trees motifs in elven work) as representational artwork within Tolkien's world also.

EDIT: It occurs to me that some of the stories within poems and songs might be understood as fictional. For example, Frodo's song in the Prancing Pony about the cow, moon, dish and spoon, is probably not understood by those present as an historical narrative. :) There's a poem about a troll slurping on the thighbone of a hobbit's uncle that probably fits this bill also. I never quite figured whether the poem "The Mewlips" was in Middle Earth or not, but if so, that is also likely fiction.

Tolkien drew a number of pencil sketches of the various settings in the Hobbit and LOTR. 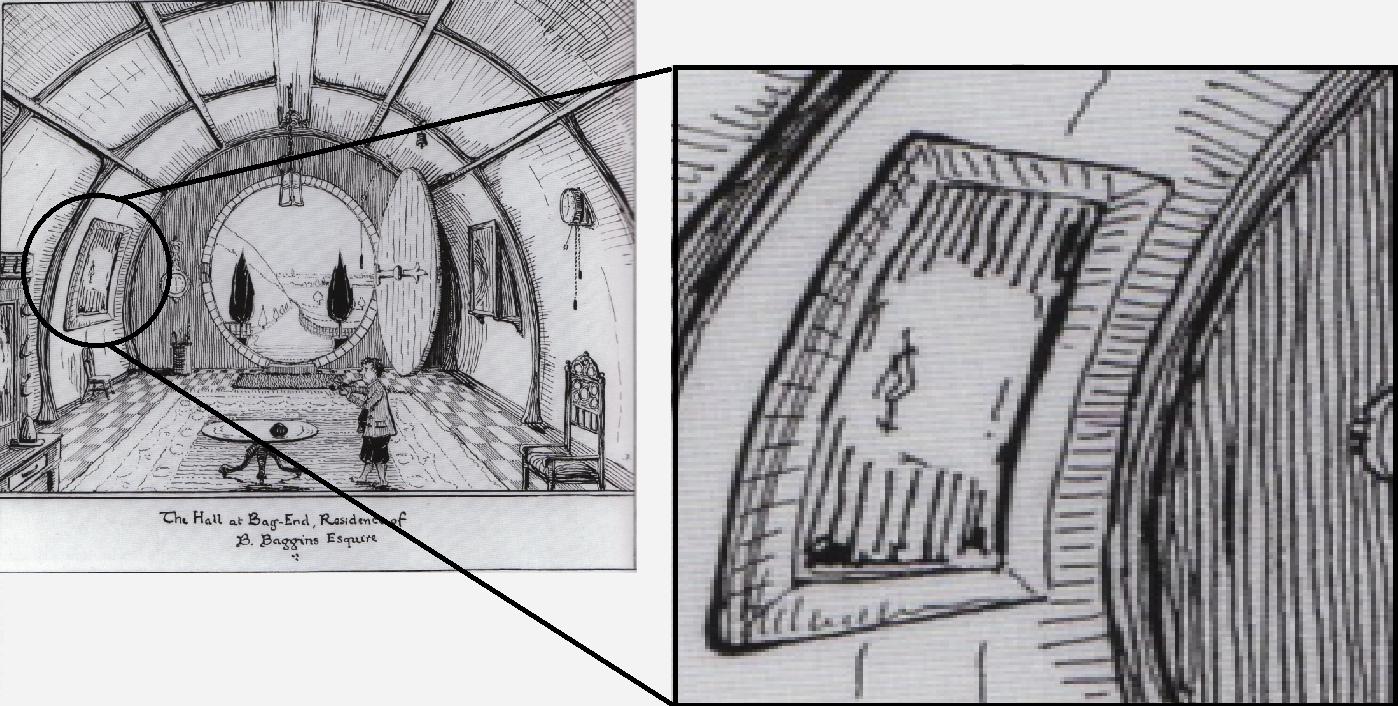 There's at least one reference to purely ornamental artwork in "Unfinished Tales" regarding the Drúedain. Note that some of this art is functional (e.g. to serve as crude scarecrows to ward off orc attacks) with other pieces described as fantastical.

But when in Beleriand by association with the Eldar and in traffic with the Dwarves of Ered Lindon these things became more common, the Drúedain showed great talent for carving in wood or stone. They already had a knowledge of pigments, derived chiefly from plants, and they drew pictures and patterns on wood or flat surfaces of stone; and sometimes they would scrape knobs of wood into faces that could be painted. But with sharper and stronger tools they delighted in carving figures of men and beasts, whether toys and ornaments or large images, to which the most skilled among them could give vivid semblance of life.

Sometimes these images were strange and fantastic, or even fearful: among the grim jests to which they put their skill was the making of Orc-figures which they set at the borders of the land, shaped as if fleeing from it, shrieking in terror. They made also images of themselves and placed them at the entrances to tracks or at turnings of woodland paths. These they called ‘watch-stones’ of which the most notable were set near the Crossings of Teiglin, each representing a Drúadan, larger than the life, squatting heavily upon a dead Orc.

And in an earlier version of LOTR, Gandalf described Bilbo as possessing ornaments of gold (e.g. objects that served no practical purposes)

None of them are wealthy as your forefathers reckoned it, but you will find some of their dwellings have fairer things in them than you can boast here, Thorin. The Hobbit that I have in mind has ornaments of gold, and eats with silver tools, and drinks wine out of shapely crystal.”

The Silmarillion chapter 1 (of the Beginning of Days) includes the following description of the Noldor:

Aule it is who is named the Friend of the Noldor, for of him they learned much in after days, and they are the most skilled of the Elves; and in their own fashion, according to the gifts which Iluvatar gave to them, they added much to his teaching, delighting to tongues and in scripts, and in the figures of broidery, of drawing, and of carving.

While some of these could be argued to be crafts, the definition of others could really go either way.

There is other evidence elsewhere; letter 156 for example has the following to say about the Númenoreans:

While obedient, people from the Blessed Realm often visited them, and so their knowledge and arts reached almost an Elvish height.

The distinction of knowledge from art, and the lack of capitalization of "art", are both significant. Contrast letter 131:

Their 'magic' is Art, delivered from many of its human limitations...

Here Tolkien used capitalized "Art" to represent magic, power, etc; the lack of capitalization when describing the Númenoreans strongly suggests that something else is being described here, and there is no reason to suppose that it's anything other than artistic works.

We also see the following description of Meduseld (in the Two Towers, King of the Golden Hall):

As their eyes changed, the travellers perceived that the floor was paved with stones of many hues; branching runes and strange devices intertwined beneath their feet. They saw now that the pillars were richly carved, gleaming dully with gold and half-seen colours.

This in turn contrasts with a description of woven cloths containing figures from legend immediately following it, and it seems reasonable to suppose that the colouring and decoration described here was purely artistic.

In Return of the King, Minas Tirith, we also have the throne room described:

Monoliths of black marble, they rose to great capitals carved in many strange figures of beasts and leaves; and far above in shadow the wide vaulting gleamed with dull gold, inset with flowing traceries of many colours.

And once more this description is purely decorative.

So there are descriptions of artistic works present in Tolkien, but they are incidental to the main themes of Tolkien's interest (which were history and linguistics), and while Tolkien may not say anything about other possibilities, that doesn't mean that they don't exist.

I'll leave you with a quote from letter 181:

The Elves represent, as it were, the artistic, aesthetic, and purely scientific aspects of the Humane nature raised to a higher level than is actually seen in Men. That is: they have a devoted love of the physical world, and a desire to observe and understand it for its own sake and as 'other' – sc. as a reality derived from God in the same degree as themselves – not as a material for use or as a power-platform. They also possess a 'subcreational' or artistic faculty of great excellence.

Again, Tolkien doesn't describe the kind of art that the Elves do, but it most certainly does exist.

Could you not argue that all the songs, while perhaps representing true events in some way are also expressions of that character's take on an event and therefore filtered through an artistic lens? 'Errantry' for instance is a heavily romanticized recount of Earendil's travels as he desperately attempt to find Aman and beg for the Valar's aid.

Most narrative songs and folk-tales in our world work much the same way and I doubt anyone would argue they lack genuine artistic merit.

Some readers and commentators - although STRONGLY not my reading - even take this a step further. They argue that ALL the related history is at best diluted folklore. A kind of tale told muddily from tale told from badly-remember tale until it gets down to the narrative which IS direct history - ie LoTR and the non clearly-humerous parts of TH. It is an interesting take and one Tolkien himself seems to have played with from time to time. For instance there is even a letter he writes where he affirms that Ea was a planet by our modern standards orbitting a star just as we do; he says something along the lines that modern astronomy has taken too tight a grip on him and it seems 'silly' to base things around the sun-ship or Arien and moon-ship of Tillien and so forth. The very oldest stories that are puiblished in the book of lost tales work along these lines - Aelfwine is told stories which he hazily re-tells to the reader.

In some ways I find this way of looking at the stories refreshing and new - but equally I reject it totally. For me - and I think most readers - the tale of years and the events in the Silmarillion and unfinished tales and so on ARE concrete 'history' and 'what really happened'. Anything else is subtle and a very clever way to subvert the narrative form, but not how I personally view things.

There's one story about the Awakening of the Elves.

Tolkien noted that it was written "(in style and simple notions) to be a surviving Elven fairytale, or child's tale mingled with counting-lore".

As you can see the story is quite "childish", and it suits the Elven duodecimal counting system too much to seem real. Also the heads of the three clans are given the names: Imin, Tata, Enel - basically Oney, Twoey, Threey in Elvish.

But again, origin stories tend to be too "simple" to believe, maybe Tolkien meant it to be an accurate account that survived in the form of a fairytale.

Well, there's "Leaf by Niggle", a short story about a painter in a world that doesn't value art. But that doesn't seem to be part of Middle Earth.

74
Is Tolkien's Middle-earth in our Universe?