Novel about a ship with a neutron star at one end to counteract acceleration, gets stuck in acceleration mode

I read this novel 30 years ago, so it's at least that old, but probably decently older.

I can remember only details, but I remember an older couple (a woman, who was captain of a ship, I believe), and a younger couple, one of which possibly a child of the older couple. One of the younger couple was brilliant, and had an experimental ship that was built like a dumbbell, with a habitable section at one end, and neutron star (?) material at the other end, and they would slide the habitable section toward the star material to counteract acceleration.

I remember the ship got stuck like that, and they were running out of fuel, so they had to orbit either a neutron star or black hole in order to survive. The details are fuzzy, which is probably why I've had such a hard time tracing it down.

story-identification hard-sci-fi space-exploration
Share
Improve this question
edited May 16 '19 at 3:28

This sounds like it's mostly based on "Moment of Inertia", a short story by Charles Sheffield. It was published as "Second Chronicle: Moment of Inertia" in The McAndrew Chronicles (1983), an anthology of stories with the same protagonists (viewpoint character Captain Jeanie Roker and her friend/eventual romantic interest Professor Arthur McAndrew). (It was republished with additional material in The Compleat McAndrew in 2000.) The text of the story is available on the Baen website. Because all the stories in this anthology are linked, it would be easy to confuse one with part of a novel. 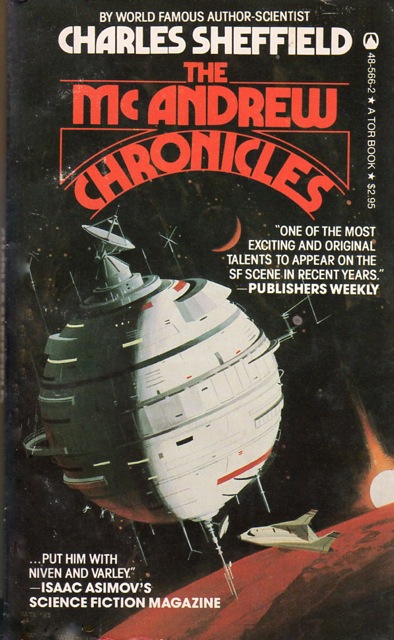 In "Moment of Inertia," McAndrew is testing a new spaceship designed as a 100m diameter, 1m thick plate of collapsed matter (to a density near that of the surface of a neutron star) with a 250m long pylon on the back to which the control cabin is attached. At 246m distant from the plate, the disk exerts a force of 1g on the cabin. As the ship accelerates, the cabin is moved closer to the plate, balancing the acceleration due to gravity against the acceleration of the ship as a whole. With the cabin moved to within 1m of the plate, the gravitational force on the cabin exceeds 50g (51g really), allowing the spaceship to accelerate at 50g while the occupants/crew continue to experience 1g (towards the plate).

McAndrew has disappeared on his test flight at full acceleration along with Nina Velez, a young woman journalist whom he brought because he was infatuated with her. Captain Roker is sent to find and rescue him along with Dr. Ulf Wenig, another scientist from the Institute where McAndrew works, in the 2nd prototype ship.

They find McAndrew perched on the edge of a large singularity where the ship's drive at 50g exactly balances the gravitational acceleration of the singularity. A mechanical problem with the pylon means that they can't move the cabin away from the disk, and if they turn off the drives the occupants will be killed by the 50g force of the disk.

After a complex dance, they free the cabin and both ships return to the Institute. McAndrew and the journalist, who are now completely sick of one another, split up and McAndrew flies back with Captain Roker, while Wenig returns with the journalist.

Roker and McAndrew do eventually have a child; you could be conflating part of another story from the same collection.

Not the answer you're looking for? Browse other questions tagged story-identification hard-sci-fi space-exploration or ask your own question.

20
Sci-Fi short story that involved time travel and a couple who keep losing each other
2
Denizens of Jupiter's Atmosphere
1
Paperback novel about a sea or lake monster (I think)
33
A story about a derelict ship orbiting a planet with spider-like creatures
4
Old story about space exploration program with young adult crew
12
Looking for a (short?) story about a cryo ship looking for habitable planets
10
Sci-fi Novel about human starship fighting alien starships with FTL “warp bubble” missiles?
16
Looking for a short SF story about two ultra-fast ships flying around the entire universe