I'm looking for a book set in the future where America is fighting a despotic or corrupt U.N.

The U.N. practically forces the U.S. to join a new world order, disbanding their military. The US has a lot of colonies on other planets and so has the UN. A lot of starship battles, spacefighters, ground combat. It's a bit like Inheritance Trilogy or the Star Carrier series (both by Ian Douglas).

Could this be one of the Halo novels? The UN has a considerable number of planets under their control and their desire to dominate the remaining planets (often by military force, using massed spaceship battles and planetary bombardment) is a key theme of both the novels and the games.

This, for example is the blurb for Halo : The Cole Protocol

In the first, desperate days of the Human-Covenant war, the UNSC has enacted the Cole Protocol to safeguard Earth and its Inner colonies from discovery by a merciless alien foe. Many are called upon to rid the universe of lingering navigation data that would reveal the location of Earth. Among them is Navy Lieutenant Jacob Keyes. Thrust back into action after being sidelined, Keyes is saddled with a top secret mission by ONI. One that will take him deep behind enemy lines, to a corner of the universe where nothing is as it seems.

Out beyond the Outer Colonies lies the planet Hesiod, a gas giant surrounded by a vast asteroid belt. As the Covenant continues to glass the human occupied planets near Hesiod, many of the survivors, helped by a stronghold of human Insurrectionists, are fleeing to the asteroid belt for refuge. They have transformed the tumbling satellites into a tenuous, yet ingenious, settlement known as The Rubble - and have come face-to-face with a Covenant settlement of Kig-Yar...yet somehow survived.

Could this be "Freehold" by Michael Z. Williamson? The themes of a UN-dominated planetary Federation taking on an independent-minded pro-capitalist colony (called the freehold of Grainne) seems very familiar.

In many lucid and well written steps you are brought through a very alien culture with Kendra as your measure. Kendra is very much a future character, beholding to a corrupt and stifling world government. Both are a strong contrast to the responsible and liberty minded Freeholders and their government. I liked this contrast of differing world views. I find earths government stifling and Freeholds appealing.

The scenes where Kendra flees her home from wrongful prosecution at the hands of the world wide UN government kept me interested throughout. I felt that she was competent and capable when she chose Freehold as the only planet that will not extradite her. From the moment she lands at Freehold she is battered by a kaleidescope of strange local practices.

I throughly enjoy the contrasts between her upbringing under what amounts to a totalitarian dictatorship and her experiences with the Freeholders free wheeling capitalists. 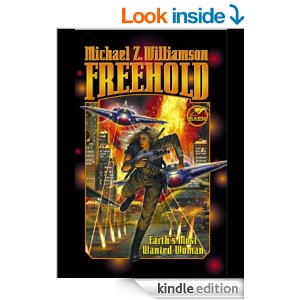 A similar plot runs through the Ai Wars series by Daniel Keys Moran. It starts in Emerald Eyes as telepaths begin to appear in the world. With the UN gradually taking over all the world governments and continues in the Long Run and the Last Dancer. Bionically enhanced international soldiers become the peacekeepers/enforcers. The United States Military tries to resist, but with american cities being nuked, it surrenders. There is a resistance group formed by some of the military and citizens. Colonies on the moon, an AI who's behind the resistance movement are part of the plot, don't recall space battles. The mutant humans are against the UN, for their initial wiping out of most of their kind, but they are not fully aligned with the resistance movement.

Not the answer you're looking for? Browse other questions tagged story-identification military-sf or ask your own question.