I read this book back in the 1990s, and its plot revolved around Japan (pretty sure) going to war with (primarily) the west (although Im sure Russia got involved at some point against Japan).

The main points in the story were Japans technological dominance, their use of a neurological weapon (not a bio weapon) which causes victims to lose all voluntary muscle control, leaving them requiring permanent medical care. The western forces had a new helicopter which used a rail gun as its primary weapon - the rail gun required calibration regularly, and the lack of calibration equipment availability is another main point.

The novel ends in the following way (spoiler based):

Several of the main western characters discover that all the oppositions high tech weapons are centrally controlled, and they all have the ability to be destroyed by that central control point. So they launch an attack on one of these control points in an effect to destroy the neurological weapon primarily - the novel ends with two of the main characters sacrificing themselves after its discovered that each destruct command requires a manual confirmation, and as they don't know the name of the weapon they can't target it directly, so they end up having to essentially start at the beginning and go through a very long list...

The book in question is The War in 2020, by Ralph Peters, so you were pretty close on the title. 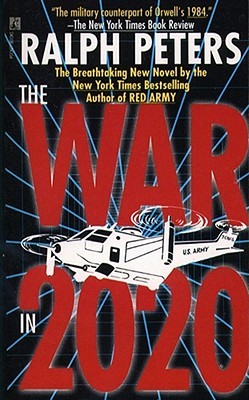 3
Novel about a war between the Americans and Russians in Antarctica?
15
old fantasy novel with ravens or crows and magic staff
37
An old SF novel about interstellar war fought without FTL drives
33
Old science fiction novel about a man of the near future awakening from suspended animation to find himself in a technophobic theocracy
10
Novel about a chase around the world with ubiquitous use of Augmented Reality
10
Scifi novel about a prison station in the sun that turns into an alien invasion
18
Absurdist/comedic novel about the behind-the-scenes of the universe
4
Science fiction novel (first of a series?) about brain implants and social change