Looking for an old animated movie with 4 superpowered characters

So this movie is about 3 guys and 1 girl flying around in space in a big spaceship, and they all have their own "power" and they have different ways of acquiring them. One guy's suit is green and white, the other dude's is red and white and I can't remember the third. As for the girl, I think she is a princess or something, I believe she could read minds and control them. They also have each own smaller spaceship they use for when they are going down to a planet to "kill the threat".

The guy in the green suit is short and fat and likes to eat a lot. The guy in the red and white suit is the head character and possibly the strongest of them all. He has this headband thing, that he does something to, then it starts glowing and his powers emerge and transforms him, giving him full bodyarmor like a spacesuit. The other male character is tall and skinny, I can't remember the color of his suit though.

In some part of this movie they come to a "crystal galaxy thing" where they fight an "ice crystal princess" or something like that. It's very hard to be super specific, cause I feel like I know a lot about this movie, but then again it was like 20 years since I saw it the first time.

I remember the box for this VHS was white and a little bigger than all the other boxes, if that's any help.

After looking for this anime for seriously 20 years, I finally managed to google it! (Lemme tell you, I ran across several threads asking the same question: "can anyboy tell me the name of this anime with 3 guys in different colored suits where one has a mace for a weapon." No answer. Hehe. Everybody in Sweden seems to have watched this anime in the '90s.) Anyway, without further ado: Starzinger.

The story revolves around the Princess of the Moon, Aurora and her three cyborg companions (Kugo, Djorgo, and Hakka) who must travel to the Great King planet and restore the Galaxy Energy in the year 2072. The universe was becoming more and more unbalanced as the Queen of the Great Planet grows older. Their adventure includes battling the starmen who are transformed from the unbalanced minerals and planets. 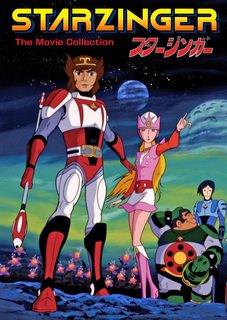 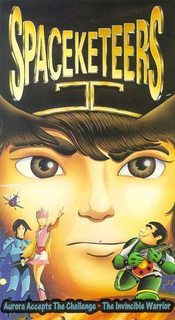 You can see on the cover image the short fat green guy, the red and white suited guy with a headband, and a tall and skinny male character (blue outfit incidentally) as well as the princess.

Princess Aurora - The only human among the main four characters. She is the last of the Moon people - Telepathy & psychic abilities and can channel Galaxy energy

Jan Kugo aka Jesse Dart - A red suited cyborg. Became a cyborg to benefit and help humanity: demoted to menial jobs, he gained a bad temper. Based on the monkey-demon, Sun Wukong, of which "Kugo" is an anagram - Wields an Astro-lance that changes size and shoots lasers; in the second season, he can become larger or smaller at will

Sir Djorgo aka Arimos - A blue suited cyborg. The most intelligent of the three. When in doubt, he asks his portable computer (which often displays a TOEI logo while elaborating a problem). Based on the water-demon, Sha Wujing, as Gojyo was the Japanese name of Wujing - Wields a Laser-trident with freeze abilities; occasionally shot missiles from his shoulders

Don Hakka aka Porkos - A green suited cyborg, cheerful, hungry and the comedian. Based on the pig-demon, Zhu Bajie, as Hakkai is the Japanese name of Bajie and Porkos may refer to pork, as in pig - Swings a mace that turns into a flail and shoots rockets from his feet

14
Children's novel: three children (plus dog?) travel to the Moon in pretend spaceship turned real
12
Obscure kids (non animated) movie/film series from the 90's or so
9
Animated Movie identification (before 1990)
4
Old anime show with pirate, princess, and boy
9
Movie with forest eating the moon?
5
Looking for the name of a sci-fi kids show from the late 90's / early 00's
12
An animated sci-fi movie with a fully armoured antagonist and a pale looking child