In X2: X-Men United, when William Stryker was meeting Charles, before forcing him to use Cerebro, why didn't Professor-X use his powers to escape? He was able to read Stryker's mind as suggested in the movie. 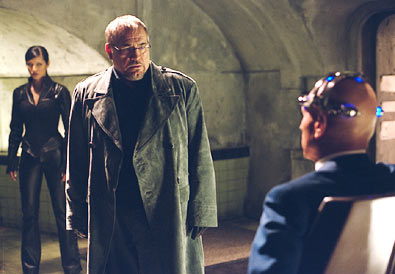 Stryker explains that the blue LED light hat thing on Professor X's head is called a neural inhibitor. It evidently prevents his telepathy from working:

Stryker : Please, Xavier, don't get up... I call it the neural inhibitor [indicating the skullcap]

The Professor never actually read William Stryker's mind. He simply observed that Stryker held control over Deathstrike, and realized with horror that he had controlled Kurt Wagner/Nightcrawler:

Xavier: You arranged the attack on the President.
Stryker: [mockingly] And you didn't even have to read my mind.

The reason he could not read Stryker's mind, or escape for that matter, was the Neural Inhibitor, a personalized device for dealing with telepaths, most notably, Charles. As stated by Stryker, "It keeps you... out of here", as he taps the side of his head, grinning mischievously.

Not the answer you're looking for? Browse other questions tagged marvel x-men-cinematic-universe x-men-2 or ask your own question.

19
Why doesn't Professor Xavier use Wolverine's healing power to fix his legs?
12
Has Charles Xavier ever exhibited the ability to freeze minds/time in the comics?
48
How can Professor Xavier be alive?
0
Why didn't Xavier go back in time?
5
Why wasn't Jason Stryker affected by Cerebro?
2
How do these characters escape from the chopper?
24
If Rogue absorbs Magneto's power then why can't she escape?
1
If telepaths can influence minds, why don't they fix the world and bring peace?
9
Is Charles Xavier the only one whose powers were not permanently affected?