Why are there so many examples in the Star War's Imperial fleet where no shield generator is in use?

Sorry I forgot the Imperial Star Destroyers do have shields. Thanks for reminding me in the answers. I was confused when I viewed the following image. 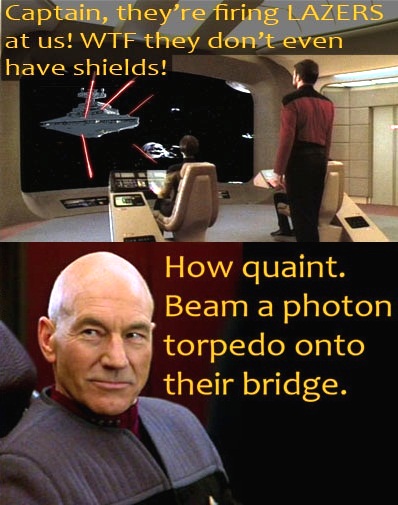 Star Destroyers do have shielding, the enormous spherical objects you see on the top of them are described as "Deflector Shield Domes".

We see evidence of Star Destroyers actively using this shielding in both Return of the Jedi and Empire Strikes Back.

As far as TIE-Fighters are concerned, the Empire's intention seems to be to build them as cheaply as possible. Adding additional systems (such as deflector shields, hyperdrive, life-support and ejector-seats) is technically feasible but would add to the overall cost per unit.

For the record, Vader's own 'TIE/x1' did have a full deflector shield and a hyperdrive, at least according to the LucasArts "Star Wars : Rogue Squadron 3" game:

The prototype starfighter used by Darth Vader at the Battle of Yavin and the basis for the frightening efficient TIE Interceptor, the TIE Advanced X1 is easily recognizable due to its distinctive bent wings. Unlike all other TIE Fighters, the prototype is equipped with a deflector shield generator and a modest hyperdrive system. The TIE Advanced is armed with fixed twin heavy blaster cannons, but has no life support systems.

The Star Wars Technical Journal article about the TIE fighter goes into a little more detail behind the thinking. Bluntly it boils down to three main factors, weight, cost and the perceived low value of a pilot.

The most common of these is the TIE fighter, a deadly match for any starfighter in the Rebel arsenal. TIE fighters are cheap to produce (hence their great number) and operate quite efficiently, with no defensive shielding or ejection systems for their pilots (which would add to the ship’s overall body mass).

This reflects the unfortunate Imperial viewpoint, with no regard for the value of life, that like their fighters the combat pilots of the Empire are plentiful and easily replaced.

Star Destroyers do have shields. In Return of the Jedi, there is a scene in which the Executor's bridge deflector shield is damaged. This is both seen on screen and explained in dialogue:

Admiral Piett: Intensify the forward batteries. I don't want anything to get through.

As for the TIE Fighters, this is not explained in the films, but the EU novel Vision of the Future has a conversation between Luke Skywalker and Mara Jade, who used to be a personal agent of Palpatine's known as the Emperor's Hand.

Mara Jade: They were cheap, and the Emperor didn't mind spending pilots.

Mara, who was in a position to know a lot more about the Emperor's private thought processes than most people, explains that while TIE Fighters are poorly designed, the deciding factor is that they are cheap; it's worth it to Palpatine to have such a poor fighter, because the lower quality allows him to buy more of them.

Well, first TIEs where built as extremely manoeuvrable short range & carrier based fighter crafts, thus hyperdrive was not required. On-board life support was not required because for only short patrols or combat sorties a small life support was carried by the pilot. Larger systems were not required because the TIE either returned to its base or was blown apart before the small system from the pilot ran out of power. Shields were also dismissed because of their "inertial" mass. So in the end there was a very light very fast and very manoeuvrable combat ship.

Also it was, from a technological viewpoint, one of the most advanced space crafts of its time and far superior when used against the average smuggler or space pirate. Every other fighter sized craft may have had shields, hyperdrive, more arms and armor, but was outclassed against a TIE or a swarm of TIES.

Y-wings, Headhunters, many other fighter crafts, had no change against a TIE. The empire only reacted with an improved version (TIE-Int) after the X-Wing proved to be more than just a match to its TIEs.

Tie fighters were designed for optimum speed and maneuverability to gain the dogfighting edge. Having no life support or shields means almost all power went to flying, laser cannons and evading enemy attack. That is a good point about the x wings seeming quite vulnerable. Perhaps their shielding was designed more for frontal assault but I don't recall much discussion of this concept.

Concerning capital ship shields ... well first having a shield outside the armored section of a ship (STD shield domes) is more than stupid.

But what is here not taken into account: how boring would it be to see a space combat scene with ships firing from distanced of a hundred miles or more? You would not even see the enemy explode. Normally no sane commander would let an enemy come this close to be able to attack vital points.

Even in WW2 ships fired from about 20 miles or more on each other. And in SW they seem to fire from a "pirates's boarding range" Its just a movie. Read the books, comics, ... and do not only refer to the movie. Gunning with the turbolaser from a ... MonCal cruiser about 100 miles away on a STD it would be impossible to directly (weapon range taken from technical readouts) attack a shield dome.

Furthermore ... looking to Star Trek: in TNG in combat scenes between the Enterprise-D and a single aggressor they fire on each other for minutes? But in large fleet scale battles (like the battle for DS-9) a couple of galaxy-class cruiser just get hit by a single beam and half of the front section is blown away. Did they went into battle without shields this time?

It's just a movie thing.

Other than the planetary shield around the death star, they seem to serve little purpose in the movies. Watching all of the ship combat scenes, you can see that it only takes one to two shots to take down an X-Wing. If fact, they don't last any longer than the flimsy Tie Fighters. Even the capital ship scenes show that the ships take damage even on the very first laser blast. I think it's really just a matter of the directors of the Star Wars movies not really taking shielding into account for whatever reason. Certainly not to the extent that shields play in the Star Trek universe.

44
Why didn't the Rebels jump to hyperspace to escape at the Battle of Endor?
1
Shield generators vs. Star Destroyer
6
Were man-portable area deflector shields used in the Clone Wars?
8
Where do X-Wing fighters—and similar small scale Rebel craft—dock to refuel and tune up when in space?
5
Why were shields on the Rogue One X-Wings not turned on or working?
5
Does the New Republic employ stormtroopers or other Imperial weapons?
89
If the Galactic Empire had over 25,000 Star Destroyers, why were only 27 at the Battle of Endor?
5
How capable are Y-wings and B-wings for taking down a First Order Dreadnought?
17
Why didn't the Imperial fleet detect the Millennium Falcon on the back of the star destroyer?