The movie is based on a futuristic type of world (maybe out of space or not). They had a reddish looking shark creature that flies into the girl's apartment (they fly over the city and are used as weapon). The creature can live out of water. The houses/homes/apartments are suspended in the air.

The movie had a man who eventually mated with the girl and she give birth to a child who can transform into a bird/pigeon. The man can also transform.

There was a scene where the man hid in the girl's bathroom and she hid the platform of the bathroom; when the authorities came in her apartment they asked her where is her bathroom, she said she gave up showering a while back. Do you know the movie?

Immortal (Ad Vitam) from 2004. The parts you mentioned are not in the Wikipedia synopsis, but I am confident it's the right one.

The film takes place in New York City in the year 2095 where genetically altered humans live side by side with unaltered men and women, and where Central Park has been mysteriously encased in an "intrusion zone" where people who attempt to enter are instantly killed. A strange pyramid has appeared over the city; inside, the gods of ancient Egypt have judged Horus, one of their fellow gods, to cease his immortality.

Horus is given a limited time to interact with the humans of New York and procreate.

The red sharks are called Dayak. You can see an image below: 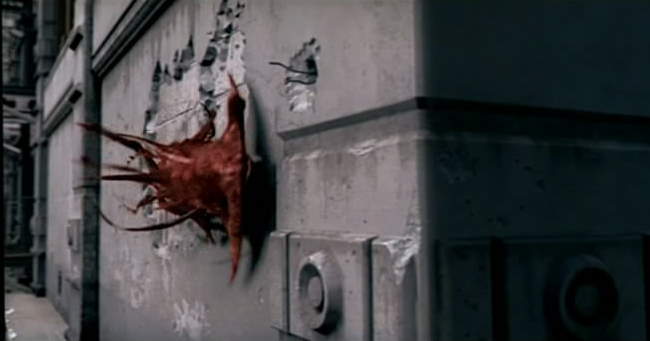 2
Black and white TV show or movie with human sized bird creatures killing people at night
11
Early 90s sci-fi movie very similar to Star Wars with lightsabers and laser guns
7
Anime about people turning into square-like, stone robots
18
Identifying an old Sci-fi story driving me bonkers
52
Short story about “the monster under her bed”, where the monster protects the girl from abusive parents
7
Trying to identify a high fantasy movie on the SyFy channel, two women accidentally bewitch men?
22
Novel about rich industrialist who is recruited by a woman who uses magic, takes him to her world were he crash lands
4
Zombie film with airborne disease. Protagonists head toward safety at the coast